Tuesday December 12, 2017: Jack struggles to work from home, Faith’s behavior is puzzling, and Sharon tells Scott she loves him. 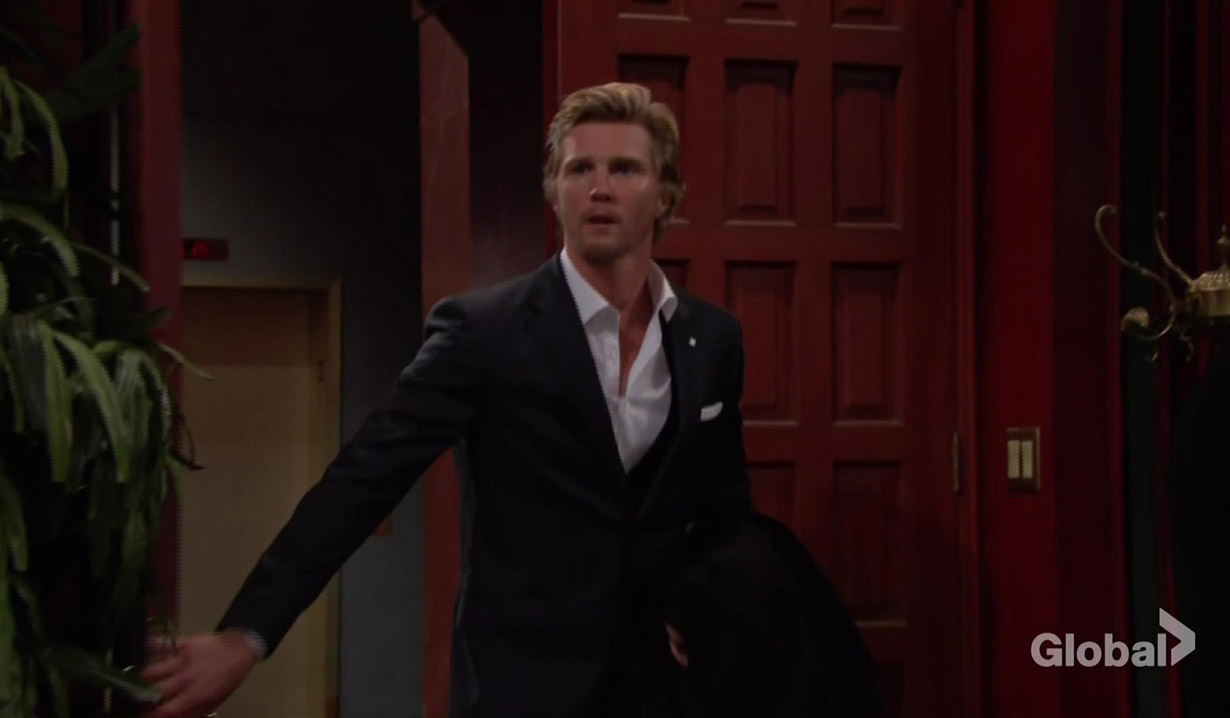 At the Abbott house, Ashley and Jack inform Dina they’ve come to a compromise regarding Jabot…Ashley will be in the lab while Jack remains as CEO. Offended that she wasn’t consulted, Dina announces she’s packing and flying out. It turns out she has doubts about Jack running the company from home. While Jack and Ashley debate about it, Dina complains about the Christmas decorations still being up in February. Later, Dina interrupts Jack’s video business meeting and argues that the woman on the screen is Traci. When Jack turns back to the computer, his business associate is gone. At Sharon’s place, she’s puzzled when Faith doesn’t want to accept a drive from Scott. Mariah offers to take her and they leave together. Scott wonders how he ticked Faith off without even trying, but Sharon reassures him she had the same issue when Nick moved in with Chelsea and urges him to keep being himself.

At Newman Enterprises, Victor and Victoria discuss the alleged anomalies found in Victor’s account with Michael, who leaves to find out what the authorities know. Once alone, Victoria asks Victor to be honest with her about how much trouble they’re in. Victor offers access to his files and insists it’s all on the up and up. Victor’s game plan is they go out to celebrate their solid numbers where they can be seen.

At The Top of the Tower, Kevin and Gloria wait for Michael, as she complains about him running to Victor. Michael arrives as Glo’s due back to the office. Once alone, Michael confides the anomaly the authorities are looking into is with one of Victor’s personal accounts. When Kevin’s comments remind Michael he knows the inner workings of online accounts, Michael suggests he could be the solution they need. Kevin doesn’t want to snoop through the records which are now government property. Michael says, “Forget I asked.” Later, Kevin phones someone and warns it won’t be long until Victor finds out what they did.

At Jabot, Gloria protests when Ashley suggests she work at the Abbott home and help with Dina. She changes tack and decides she’ll need a raise. Ash urges her to take it up with the CEO.

At Crimson Lights, Mariah reassures Scott about Faith. He asks what Sharon might like for Christmas. Mariah replies, “Besides a ring?” She doesn’t think Sharon would turn down a proposal. Scott mulls it over and goes on about Sharon coming through her battles with empathy and heart. He’s not ready to diamond shop today, but may be some day soon.

At the Club, Ashley stops by Victor and Victoria’s table to needle about Vikki’s failed attempt to poach Ravi, and they exchange competitive barbs. Victor fishes to find out if Ashley is carrying Jack’s load as well as her own. They argue about Jack taking on too much.

Gloria joins Jack to work at home, and Dina appears to call her a golddigger. The matriarch is furious to learn Jack told Gloria about her condition, and invites her not to hold back. “Call a bitch a bitch!” Gloria does so, and Jack grimaces. They work until Dina refers to Gloria as ‘the help’ and Jack ushers Glo out with apologies. Dina starts talking about Chancellor acquiring a new skincare division, and wants Jack to stop making excuses about Jabot – John always said he was a disappointment. Jack is floored. Later, Ash arrives and bickers with Jack about Jabot being stuck in neutral. Eventually Jack says he needs to leave his mark, and needs to do it now.

Mariah brings Faith home and grills her unsuccessfully about her issue with Scott. When he comes in, Faith goes upstairs. Later, Scott and the girls surprise Sharon with flowers and dinner, but Faith’s still standoffish. After dinner, Sharon tells Scott she loves him. Scott replies, “I love you, too.” They kiss as Faith watches. Michael returns to Victor’s office to warn him and Victoria the authorities are sending someone over to discuss the anomaly – their attendance is mandatory. When the person arrives, Victor and Victoria are stunned to see J.T. Hellstrom (played by Thad Luckinbill) come through the door.

Billy wants Phyllis to quit her job since he has enough money for both of them.

Nick learns there’s been a winning bid for the contract to redevelop the park.

Lily chokes when Abby reveals she had sex with Scott Grainger.