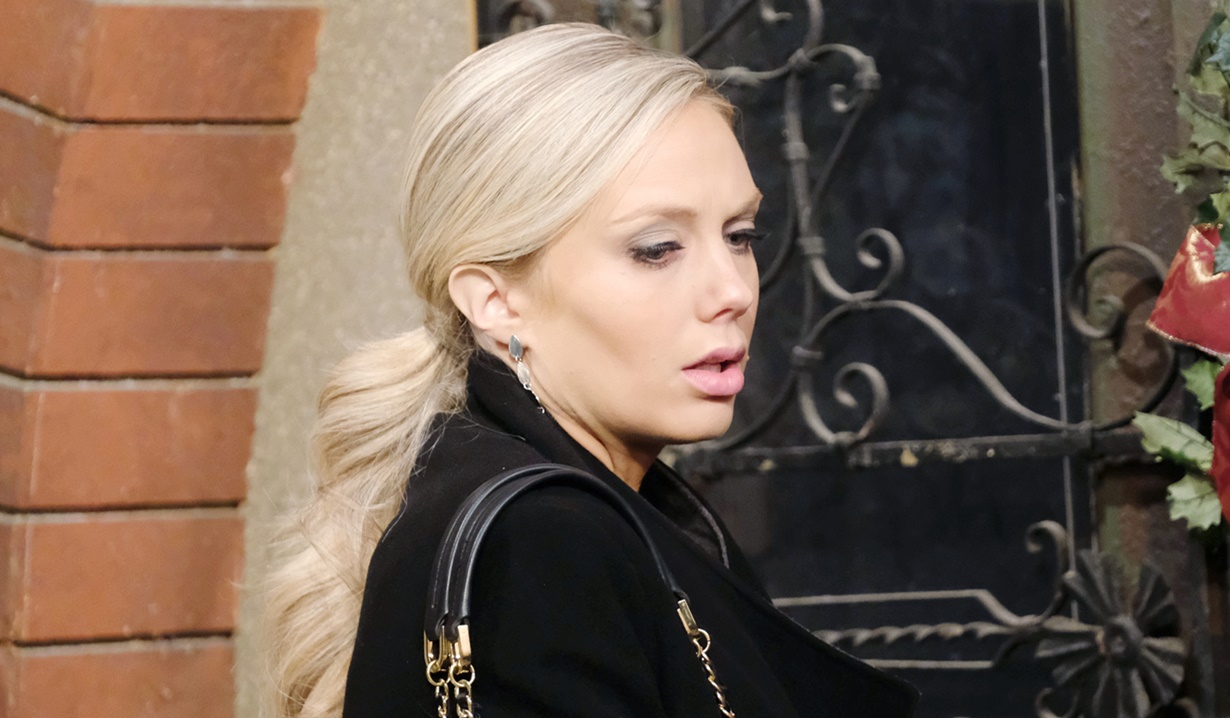 Nikki arrives at the penthouse and learns that Newman Enterprises is behind the shell company looking to develop the park. Nikki goes off about him wanting to pave over the park with Katherine’s name on it. Nick warns he won’t want to lose to the two family outcasts. Nikki’s more motivated to fight than ever.

At Chancellor Park, Victoria peruses one of Nick’s flyers about saving the park.

More: Thad Luckinbill on his return as JT

At the Abbott house, Hilary is surprised to realize Jack wants to give her notes on story ideas. Jack muses that Ashley thinks he micro-manages as well. Talk turns to Dina, and Hilary worries Jack’s taking on a little too much. Jack concedes it will require some balance. Hil suggests that balance may not exist. Jack’s surprised when she empathizes with Ashley over him leaving and then coming back. Hil understands his need for time with Dina – she’d give anything for one more day with her mother. Jack has to figure out how to do both.

At Crimson Lights, Scott and Sharon discuss him giving her the information about the shell company. He won’t reveal his source.

At Newman Enterprises, Abby and Victoria have a tense exchange while waiting for Victor. When he arrives, Victoria tells him Nick’s leading the crusade to save the park. Victor understands why people are upset, and Victoria warns they have a fight on their hands. Victor rants, “You tell your brother to bring it on then.” Victoria calls in Scott, Abby, and others to complain that someone leaked information that could compromise a deal in progress. Scott tells Abby they have to talk…away from the office. Meanwhile, Michael arrives to assure Victor he and the company should soon be absolved of criminal wrongdoing related to DesignDate. Nikki enters wanting to see Victor alone. Michael goes, and Nikki confronts Victor about Katherine’s park. He insists her name will be displayed in the new plaza. Nikki sneers at that. Victor insists it will provide housing and stimulate the economy. Nikki informs him there’ll be a battle about this and he’ll lose big.

Ashley enters Jabot and starts talking about work with Ravi. She spots apology flowers from Jack, as Ravi informs her he’s giving his notice. Ashley thinks it’s a joke until she sees his face. “You’re leaving me?” Ravi insists it’s not personal; he got a job offer too good to refuse from Victoria Newman.

At Crimson Lights, Devon chats with Nick and Faith. Once she goes inside, Nick tells Devon about Victor wanting to bulldoze Katherine’s park. Devon is stunned. Nick suggests he could use some of his inheritance to purchase the land, but Devon grimaces that it’s a conflict-of-interest since Victor’s a client. Inside, Faith can’t get Sharon to take her skating so she calls a cab. After, Devon touches base with Sharon about the park – he thinks it’s a slap in the face to Katherine’s memory and has a lot to consider. Hilary joins Devon on the patio. He reveals Neil is helping out with Moses as Sofia’s recovering from an accident. Hilary shares she found a sponsor. Talk turns to the park. Hilary doesn’t envy him being caught between Victor and Katherine’s memory, but feels he’s already made his decision. Devon, amused, asks if he’s going to beat Victor, how high should he bid?

Ashley arrives at Newman and confronts Victoria. They have it out over Ravi. Vikki warns it’s happening, but Ashley won’t allow it – he has a non-compete clause. Michael interrupts that Newman wasn’t a competitor…until they purchased Brash & Sassy. Later, Michael returns and tells Victor and Victoria that the audit is still open – there’s anomalies in one of Victor’s personal accounts.

At the penthouse, Nick tells Chelsea for today at least, he’s not making the park a father/son problem. Nikki arrives and muses about finding another way to stop Victor. At Chancellor Park, Faith hides so Scott doesn’t see her. Scott tells Abby she is the person who leaked the information Victoria was referring to. Abby realized he used her for information. Scott promises he won’t let her get fired…if it comes out, he’ll take the blame and keep her name out of it. They prepare to leave and Scott blows on Abby’s hands to warm them. This leads to a kiss, which a shocked Faith witnesses.

Ashley informs Ravi, at Jabot, that he no longer has a job offer at Newman. Ravi reveals he only took the offer because it was best for them. Ashley smiles. She says she threatened to sue; she was ready to go to the mat for him.

At home, Ashley thanks Jack for the flowers. They hate fighting. He says Traci suggested a compromise and reveals plans for the new lab. Ash is irked, realizing he wants her in there full-time. Jack confirms he plans to continue running the company…from home.

Michael tells Victor, “The authorities are sending over an official to meet with you personally about the audit anomaly.”

Kevin says into the phone, “It won’t be long until the truth comes out and Victor discovers what you did.”