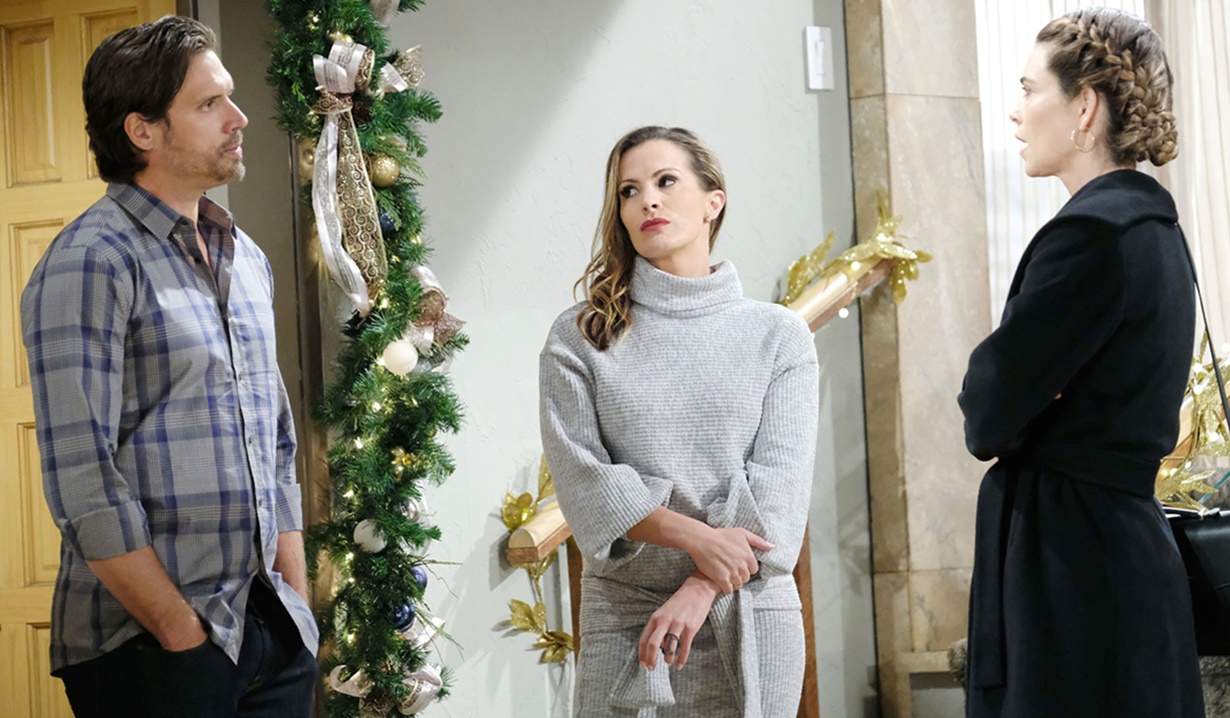 At the Abbott’s front door, Abby flashes to nearly kissing Scott. Ashley invites her in, and they discuss the ‘meeting’ at Jabot yesterday before talk turns to Newman. Ashley refers to Scott as Abby’s ally, but she snaps, “The last thing I want is Scott Grainger in my face.” Ashley’s surprised since they went through so much together. Abby tries not to think about the ordeal or Scott at all. Ashley gets confirmation of Abby’s support at Jabot, then talks about the time when Dina will need full-time care. Abby urges her mother to spend time with Dina while she can. Dina appears. After Abby goes, Ashley’s phone rings constantly as she tries to set plans with her mother. She discards the phone – they’re going to have fun if it kills them.

At Sharon’s place, Scott looks at a framed photo of him and Sharon, but it morphs into him and Abby. Sharon appears and Scott reflects on having a home after so many years overseas. He asks about holiday traditions, and Mariah appears to tease ‘no reindeer sweaters’. Scott sheepishly takes his gift-wrapped packages, but Sharon reassures him. Mariah jokes even when he commits an unforgivable sin, the woman still loves him.

At the penthouse, Nick tells Chelsea he’s discovered the shell company behind the developers that want to put condos in Chancellor Park is Alco. Chelsea questions Nick putting in the time and energy to fight this. He says it’s something he needs to do.

At Crimson Lights patio, Cane texts the twins to join him for hot chocolate. Inside, Nick and Sharon discuss the Chancellor Park issue – it’s a living memory of Katherine. Scott enters and pecks Sharon as Nick sighs. Sharon asks him to find out about Alco, but Scott thinks Nick should be realistic. Nick leaves to fight his ‘hopeless battle’. On the patio, Charlie joins Cane who wants to hear about his life. Charlie opens up and they get to laughing at Charlie’s whipped cream mustache. Talk turn to Mattie be weird with Cane, who acknowledges she hasn’t forgiven him. Inside, Sharon is upset at Scott dismissing her request and Nick’s mission. Scott says Nick’s saving a park, he saved human beings. He’s not going to be more like her ex. After, Mariah arrives and Sharon vents to her about Scott not sharing the same priorities as her and Nick. She regrets moving him in. Mariah tries to convince her not to throw away what they have.

At Newman, Scott grumbles to Abby about her brother Nick being some paragon of virtue, then asks if she’s heard of Alco. She reveals it’s an entity her father created for real estate deals.

Scott returns to Crimson Lights and apologizes to Sharon for being a jerk – he felt jealous of Nick and offers information as a peace offering – Victor owns Alco. Sharon calls Nick with the news, saying it came from a reliable customer. Sharon and Scott kiss and make-up. On the patio, Cane shows Charlie a photo of Sam, who will be home by Christmas. Charlie notes they won’t be together, but he’ll visit on the big day. Cane beams. At the Chancellor Park café, Ashley questions Dina choosing to go ice-skating. Dina wanted to recreate taking Ash skating for the first time. Ash marvels that her mother remembers, and she doesn’t. Dina remarks it only happened once, but it was special. Ashley will always remember today. Dina wants to go pole-dancing next. They laugh and clink coffee cups.

Nick arrives at Newman, where Victoria informs him Victor’s away. Nick complains about Alco and gets confrontational. He wonders if she came back to Newman so everyone could see she’s as bad as their father, and launches into a speech about the importance of the park. Victoria argues the development will create jobs, provide housing, and still have a green space honoring Katherine. Nick gets a call that Christian fell at toddler gym and leaves.

Chelsea meets Nick at the hospital and they get the news Christian just has a sprain. Nick says, “We can take our son home.”

At the penthouse, Victoria’s relieved to hear Christian’s okay and argues that Nick’s taking the thing with the park too personally. Nick vows to fight her and their dad on it all the way. After, Nick tells Chelsea she’s the only mother Christian will ever remember, and notes the boys are growing up as brothers. He’ll fight his dad because all kids deserve better.

At Sharon’s house, Mariah walks in on Scott half-dressed telling Sharon she’s insatiable. Sharon enthuses to her daughter that Scott will never let her down or hurt her.

At home, Ashley is stunned to realize that Dina has no recollection of their day spent ice-skating.

Nick says to Devon, “You could use some of the money she left you to purchase the park and leave it as is.”

Nikki informs Victor, “There’s going to be a battle about this, and not only will you lose, you’ll lose big!”