Tuesday December 5, 2017: Phyllis and Billy put a plan in motion, Hilary’s reporting has her in hot water, and Tessa’s in a tough position with Paul. 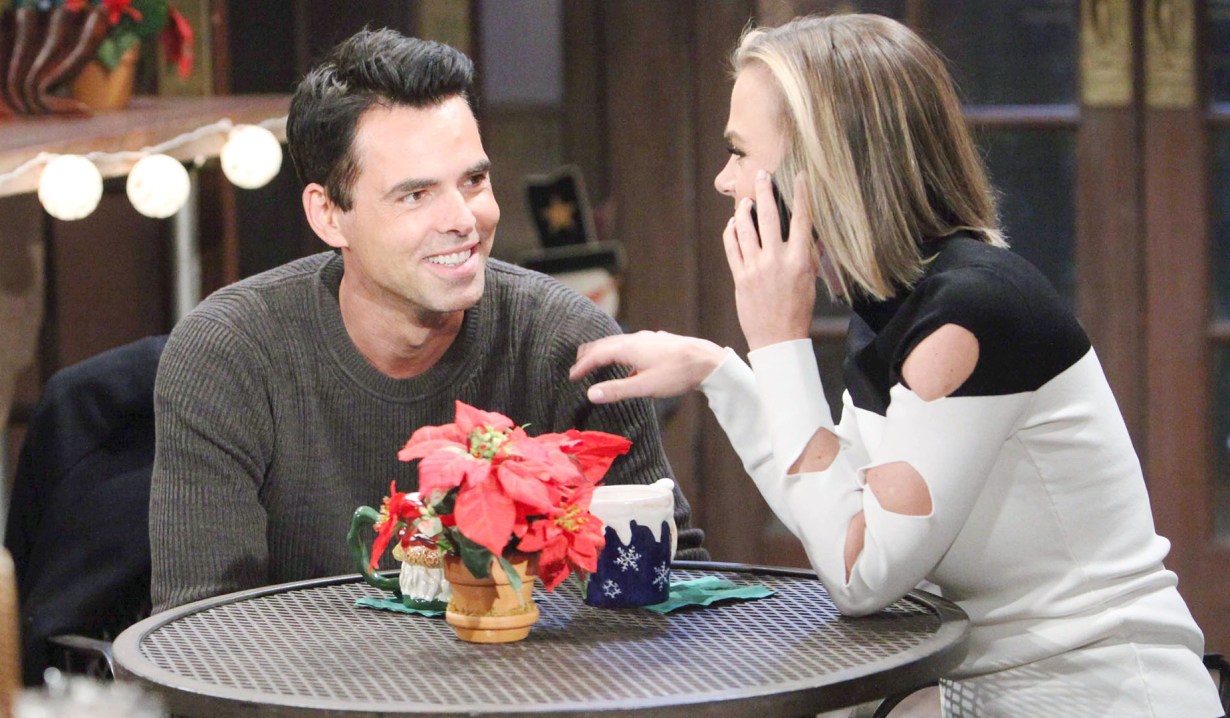 At GC Buzz, Hilary frets about Tessa being late. Mariah isn’t concerned, but when Devon shows up alone, Hilary panics – she can’t go live with no guest! Devon reassures her, and sits in as their ‘surprise’ guest. Hilary talks up his company’s success and his streaming division. Devon is impressed with her knowledge of the digital music industry.

At the station, Tessa complains to Paul that Victor tipped him off about her role in the gun situation to get her locked up – he wants her out of his grandson’s life. Paul admits the mogul is known for playing by his own rules, and suggests they cut a deal. He offers her immunity in return for evidence that will lead to Victor’s arrest. Tessa knows nothing, so Paul asks if she’d work undercover to get it.

At Crimson Lights, Phyllis coughs into the phone as she tells Lauren she’s too sick to work. She disconnects and tells Billy, “I am ready to take on New York.” They kiss.

Ravi updates Ashley on successful beta-testing at Jabot. He gets a text invitation to a new bar at Top of the Tower and asks her to join him. She declines. After, Billy arrives and broaches the subject of Ashley’s paternity. She assures him nothing will ever change the love she has for him. Billy feels the same. They embrace, then Billy asks to take the company jet to New York. Ash refuses and wonders if he and Phyllis are in a rut. Billy replies that they’re rut-less and have moved back in together. Ash wonders if he’ll propose. Billy won’t ruin it with matrimony. Ash hints she understands having fun, and Billy teases about Ravi. Ash worries she should offer a commitment…but she’s his boss. They discuss Dina. Ash tells Billy he can take the stupid jet, and asks him to come back to Jabot. Billy thanks her for the offer; he’ll see her when he gets back.

At the Abbott mansion, Jack reassures Dina, who’s repeating herself. Nikki arrives and Dina rants about her crawling back on her hands and knees with no dignity. Nikki coos that she’s sorry about the knife incident, and Jack interjects that Nikki knows something about fighting a major illness – she has MS. Dina snipes back about her stealing the spotlight, and doesn’t know anything about the ‘incident’ Nikki referred to…nor does she care! Once alone, Jack worries to Nikki about the day Dina won’t recognize him. Nikki updates him on her visit to the ranch; she can’t explain why she keeps going there. Jack wonders if she’s drifting her way back to the Mustache.

Ravi arrives at the Top of the Tower and Noah takes him to the new ‘members only’ area, which turns out to be an office at Newman Enterprises…where Victoria is waiting with his drink, and a proposal. She wants Ravi to leave Jabot and head up their software development department at Newman. She raves about his skills. He questions her motives, but she moves in close and says, “It’s you I’m interested in. Very interested.” Ravi calls it a generous and most tempting offer, but says, “My loyalty is with Ashley…er, Jabot.” Victoria respects that, but urges him to think on it. Ravi goes back to the Top of the Tower, and runs into Phyllis. They discuss Ashley. Ravi admits he spent the night with her, and they high five, however, Ravi talks about feeling used. Phyllis muses that Ashley’s always the boss woman; he has to make her see him as a desirable man. Ravi phones Ash to ask her to dinner, but ends up agreeing to meet her at the suite later. Back in Vikki’s office, she tapes a video saying Newman will be donating money to prove they’re against sex trafficking. Lily applauds the effort, then gets notification that Newman will be facing an audit. As Lily makes a call to Devon, Victoria receives a call from Ravi, who accepts her offer. After, Lily asks Victoria if there are any Newman skeletons people might find. Vikki looks at Victor’s portrait.

Noah arrives at GC Buzz, puzzled over Tessa not showing up. They go back on air, and Hilary reminds viewers Devon is her ex-husband, and also dated Mariah. She suggests they compare notes, then gets an update and reports that Tessa was hauled into the police station for questioning. Noah leaves, Mariah calls Hilary a ‘piece of work’, and Devon rants that she’s back in the dirt.

At the station, Noah is outraged at Paul’s actions. He assures Tessa he’ll get her a lawyer and thanks her for not throwing his grandfather under the bus.

Hilary suggests to Devon that Tessa come on The Hilary Hour and tell her side of the story.

Mariah shouts, “Oh God!” Sharon, naked in blankets with a grinning Scott on her living room floor, replies, “I thought you were at the studio!”

Chelsea exclaims to Nick, “They want to sell Chancellor Park? This is ridiculous!”

Nikki says to Kevin, “Victor used you to do his dirty work, and I think it is disgusting.”