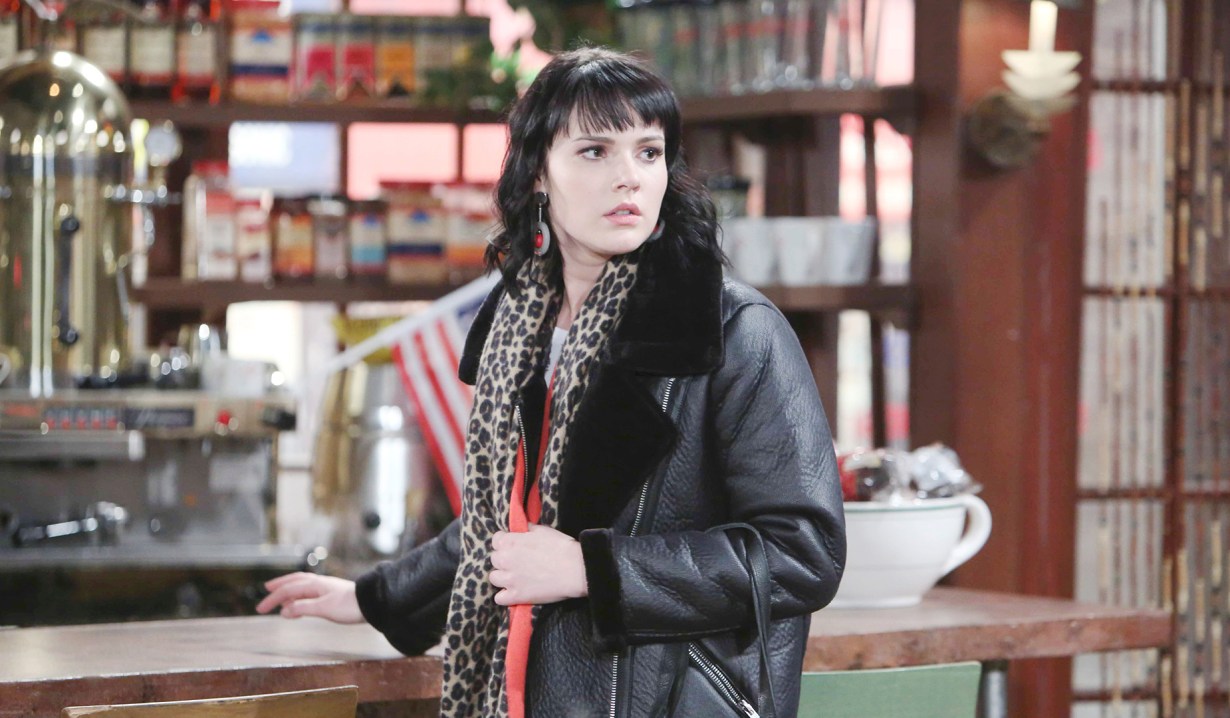 At Crimson Lights, Lily is with the twins when Cane calls to say he needs her help. Lily fills Charlie and Mattie in that Sam needs more blood banked before surgery. Mattie’s outraged about Cane’s audacity. Lily explains she volunteered. Mattie won’t go to the hospital, but tells Lily to let Cane know she’s thinking about him. Elsewhere, Nikki catches up with Abby, who confirms she expects Victor to negotiate or she won’t go back to Newman. Nikki urges her to consider everything she’d be giving up and wishes her luck.

At Sharon’s place, she tells Scott she wants to talk to him about something later. He has something to discuss with her as well. She leaves with Faith.

At the ranch, Victor, Victoria, and Reed admire the Christmas tree. Devon, filling in for Neil, arrives with a photographer. Victor reveals he thought some candid photos would help the family’s healing begin. Abby arrives. Victor talks about repairing damage and Abby quickly reminds him she won’t take the blame. She says, “If you want me to come back…” Victor interrupts her to welcome Sharon and Faith. He urges Sharon to invite Scott over – he’s like family. Sharon congratulates Victoria on her promotion before warning her to lay off her boyfriend. Scott arrives as Vikki’s saying he can speak for himself. Abby walks over – she needs help getting Victor’s ear. When she does, Abby expresses her desire to report only to him.

At the penthouse, Noah and Nick dance and goof with Chelsea and Tessa. Noah admires Tessa’s dress and Chelsea pipes up that she and Devon have been working with her on a new image. Noah mentions going to the ranch, and Nick chortles that it will be much more fun at the penthouse. Chelsea suggests they go and appease Victor, but Nick refuses, and remarks, “What is he going to do? He can’t possibly take anything else from me.” As Noah and Tessa canoodle, Nikki arrives. Tessa gets a text from Devon to come to the ranch. She and Noah leave. Chelsea takes a call from Victor and resists his attempt to pressure her into attending his tree-lighting. She complains to Nikki, who has a solution.

Reed meets Mattie at the coffeehouse and gifts her with a silver bell from his grandfather’s tree in honor of their first Christmas together. They kiss. At the hospital, Charlie offers to have his blood tested when it’s too soon for Lily to give again. Lily gives Cane Mattie’s message – she’s not ready to accept all of this. Later, Charlie reveals he’s not a match, but left Mattie a message in case she is. Mattie appears, ready to go to the lab. She’s a match. Later, Cane announces Sam made it through surgery and hugs Lily.

More: Thad Luckinbill and casting for all soaps

Noah and Tessa arrive at the ranch, where Victor pulls Noah aside and updates him that Tessa stole Nikki’s gun and gave it to Crystal. He explains the gun was used to kill Zach and implicates all of them. Noah argues she was protecting her family, but Victor wants him to cut her loose and questions Tessa’s motives in being with him. Nearby, Scott and Abby end up under the mistletoe, but Scott only kisses one woman – he pulls Sharon in for a smooch. Meanwhile, Nikki arrives with Connor, and Victor wants her to leave the boy and go. She thinks he’ll need help, and Devon feels it will be good PR to have the matriarch there. Later, Sharon and Scott say goodnight, and Nikki checks in with Victoria, who complains about Victor going off on her for accepting Abby’s resignation. Nikki doesn’t think she should be surprised. Elsewhere, Noah confronts Tessa about the gun and why she’s with him. Tessa explains she didn’t tell him so he’d have deniability, and understands him not wanting to deal with her crap. Noah hugs her. Victor announces Connor will be lifted to place the star on the tree. Everyone claps as the tree lights up. After, Victoria comments things changed with Scott and Abby since the storage unit. Abby snaps that she decided not to let people take advantage of her anymore. Victor corners Tessa to ask what else she’s stolen and offers her $100,000 to vanish. Tessa wants to be with Noah and isn’t going anywhere.

At the penthouse, Chelsea admits to Nick that Victor tried to guilt-trip her into going to the ranch. She feels keeping Connor from his grandfather is wrong, and is glad it worked out. They kiss.

At home, Sharon presents Scott with a Christmas stocking to hang over their fireplace. “I’m asking you to move in with me.” Scott quickly agrees. “Hell yes!” Sharon wonders what he wanted to ask. He says her commitment answers all the questions he had.

Dina says, “I’ve been telling you and telling you this woman has no dignity.” Nikki looks to Jack for a reaction.

Mariah asks Hilary, “Do you know something about Tessa that Devon and I don’t?” Hilary replies, “I certainly do.” Noah looks on.