Lily Supports Cane As He Prepares for the Worst With Sam

Thursday November 30, 2017: Hilary’s show is in trouble, Ashley becomes frustrated, and Jack works to get Dina in the Christmas spirit. 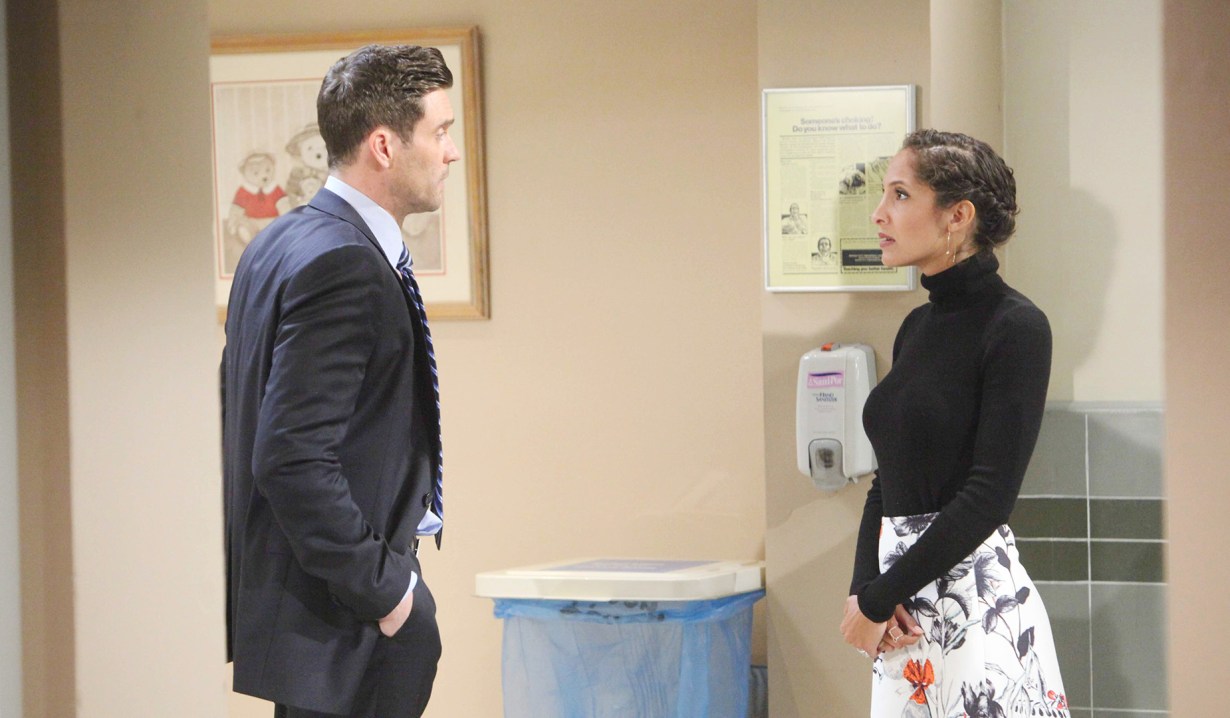 At Jabot, Gloria takes a call from Hilary, who wants to speak to Jack urgently. Glo enthuses about her nude photos, so Hil disconnects.

In the Abbott living room, Ashley marvels at Jack ushering in men with a huge tree. For Dina’s sake, he wants it to be the best Abbott family Christmas ever. Dina appears and Jack enthuses that they’ll deck the halls! Dina sniffs that she always had the help do that and totters off. Ash warns Jack not to get his hopes up too high. After, he coaxes Dina about taking part in family traditions. He wants to decorate the tree together. Dina pops an ornament on and asks, “There, are we done now?” Later, Jack sits Dina down for the light reveal, but they short out. Dina storms off – she couldn’t care less. Jack’s discouraged. When she returns, Dina wants a little alcohol with her medication. Jack mutters that he won’t tell if she won’t. They talk about John, but Dina forgets who they were discussing. Then she can’t remember if she attended Jack’s wedding to Phyllis. Jack shakes his head. Dina’s sorry she missed so many occasions. Jack sends her to rest and turns his attention back to Christmas. When Dina reappears she marvels at the abundance of Christmas in the room. Jack sneaks aside to thank Mrs. Martinez (played by Margarita Franco).

At Crimson Lights, Lily confronts Charlie for trying to avoid her. She sits him down for a talk about looking at nude photos online and reveals how she once made contact with someone in a chat room and got an STD. Charlie freaks. “TMI!” But agrees to apologize to Hilary. Talk turns to Cane – she’s happy they’re hanging out together again. Later, Cane gets up to speed on Charlie from Lily, who also asks about Sam and his work. They pass time chatting until Cane gets a call from Sam’s doctor – it’s serious.

Ashley arrives at Jabot and starts dictating her schedule to Gloria, who struggles to keep up. Glo suggests she apprise Jack of the changes she’s making, but Ash disagrees and tells Glo, “I’m in charge. Deal with it.” Ravi appears as they try to get on with work. He helps clarify Jack’s computer filing system as Glo keeps sniping about Jack always being in complete control. Later, Phyllis arrives to meet about Fenmore’s. Ashley dismisses Gloria, who stays. Phyllis seeks help getting a transport deal, which Jack was going to negotiate. Ash remarks that Jack’s been distracted and making big decisions without consulting her. This prompts another argument with Gloria. Ravi intervenes. Ashley tells everyone no more deferring to Jack. She sees Gloria’s been updating him and throws everyone out before leaving. Phyllis tells Ravi he was kind of sexy cheering Ashley on in the meeting. Ravi’s unsure, but Phyllis counsels, “Patience, grasshopper.” Ravi can’t wait forever.

Hilary is on the phone with another advertiser threatening a boycott when Charlie arrives at GC Buzz. He apologizes for laughing over her photos with her friend. She sighs and explains it seemed like a fun idea and she trusted the person who took them…big mistake. After, she returns to damage control on the phone with Barry, who feels her show is dead. Hilary thanks him for nothing and snaps on Mariah for drinking soda. Mariah realizes the show’s in trouble. Hilary insists she’ll turn GC Buzz into a lean, mean fighting machine. Mariah’s on board and starts calling potential guests.

Ashley returns to the Abbott house and wonders how Jack did all the decorating before informing him the only gift he’ll get from her is a lump of coal. She rants at him about Gloria keeping him updated until Dina intervenes to pull Jack back into reminiscing. Ash texts Abby to meet for dinner, but she already has plans. Later, Dina recalls helping Jack make his ‘Jacky’ Christmas ornament. She asks that when she becomes difficult to handle, he remember that she loves him now and always. They embrace.

At Jabot, Gloria heads off teasing about her packed social calendar as Ravi shakes his head. Suddenly Ravi gets a text – it’s a booty call from Ashley to meet in a suite at the GCAC and bring only his toothbrush.

Ravi enter the GCAC suite and encounters Ashley in lingerie holding out a glass of scotch. She orders him to stay silent and get undressed.

At the hospital, Cane updates Lily that the medication Sam’s been on for his preemie heart condition isn’t working – he’s been told to prepare for the worst.

Ashley hollers at Victor, “After everything that Abby’s been through, how dare you push her out of a job!”

Sharon tells Nick, “I want to ask him to move in with me.” Nick says, “With you and Faith?” Sharon replies, “Just wanted to get your thoughts.”

Scott gets a job offer that is based in New York.