Abby Accuses Scott of Double-Crossing Her at Newman Enterprises 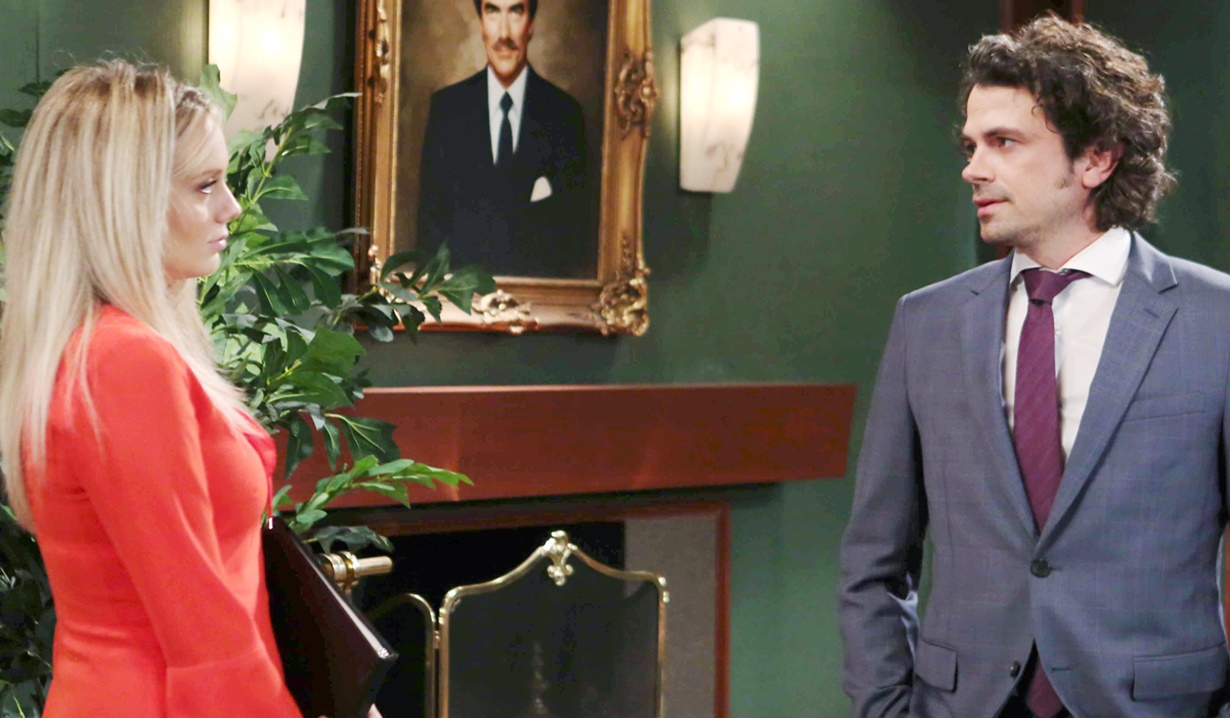 At Sharon’s place, she and Scott discuss her reception the previous night, which was warmer than he deserved. Sharon complains about Abby dragging him into her drama, and putting him in Victor and Victoria’s crosshairs. A little distance between him and Abby might be a good idea. Scott apologizes for missing her dinner; he’ll take her to The Top of the Tower to make it up to her. Abby arrives looking for Scott and Sharon leaves them to their work, kissing Scott deeply on her way out. They rehash the press conference and discuss next steps.

At the Club, Devon looks upset as he sees Hilary’s photos online. Charlie appears and they discuss his family issues. Charlie expresses concern about Sam, but feels guilty supporting his dad. Devon assures him Lily wouldn’t want him to feel that way, and offers up life advice about being his best every day.

Later, Hilary admits to Sharon she was up all night trying to figure out how to deal with her problem. She’s not expecting sympathy, but Sharon says what happened to her was wrong, and she’s sorry about what she’s going through. They get to talking about the sex ring and exploitation. Hilary assures her she’s nobody’s victim, but looks pained once alone. She phones Devon, and realizes from his tone he’s seen the photos. Hilary asks Devon to meet, as she has a proposal for him. When Devon arrives, he touches base with Sharon about the split with Mariah before joining Hilary. She promises her proposal will be worth his while. Devon learns she wants Hamilton-Winters to sponsor her show and bring TV back into his media domain. He spots Charlie and his buddy laughing at Hilary while looking at their phones and storms over to confront his nephew about his behavior. Back at Hilary’s table, Devon declines her proposal. Hilary presumes he doesn’t think she’s good enough and explodes before dissolving into tears. Devon soothes, “It’s okay.”

At the penthouse, Paul confirms to Nick that the person who came into The Underground after him committed arson, but won’t be prosecuted. Chelsea arrives in time to learn that Dina was the culprit. Nick rants about her getting away with it, and Paul interrupts to explain the extenuating circumstances…Dina has Alzheimer’s. Nick and Chelsea immediately change their tune, and Paul says the Abbotts will appreciate their understanding. After Paul’s gone, Nick feels badly for Jack, and worries, what if it happened to one of his parents? He reflects on his estrangement with Victor – he still loves him. An invitation arrives for a tree-lighting ceremony at the ranch for Chelsea and the kids only. She won’t go if Nick’s not going, and decides they’ll have their own party.

At Newman Enterprises, Abby and Scott agree on their approach to dealing with Victor, but learn Victoria’s meeting with them instead.

Victoria calls Abby in and lectures her. Abby interrupts – she will save Vikki the trouble of firing her by quitting. Scott is called in next. Victoria presumes he’ll quit too and hands over his last paycheck. Scott’s exiting when she gets a call from Power Communications about him. After, Scott rejoins Abby and relays that he’s staying and got a bonus – Power Communications called about the hits on his Hashtag article so Victoria decided to keep it. Abby’s is furious – he double-crossed her and she’ll never forgive or forget it.

At Top of the Tower, Noah admires his mother’s style as Scott appears and also marvels at Sharon’s beauty. Scott declares a celebration, then asks for a minute when he spots Abby at the bar. Abby’s abrasive, but Scott suggests she go back to Newman and tell Victoria she’s not going anywhere. Abby has no intention of it. As Sharon sits alone, Scott works to explain to Abby why he agreed to stay on at Newman. He’s sorry for how her family treated her. Abby takes back what she said earlier. Meanwhile, Sharon worries to Noah that Abby has a thing for Scott, and decides it’s time she showed Scott how crazy she is about him.

At the Club, Devon knows Hilary is hurting more than she’s letting on. Hil admits she feels deeply violated. She hates that she made other people feel this way as well. Devon thinks it could be a turning point for her. She thanks him and they agree they are friends.

Jack tells Dina he’s trying to make things festive around there, but she snaps, “Frankly, I couldn’t care less.”

Ashley informs Gloria, “I’m in charge. Deal with it.”

Jordan Gets Revenge as Hilary's Nude...

Lily Supports Cane As He Prepares...