The Gun That Killed Zach Belonged to a Newman

Monday November 27, 2017: Jack breaks it off with Nikki, Nick and Chelsea try to recover from New Orleans, and Dina comes to a shocking realization. 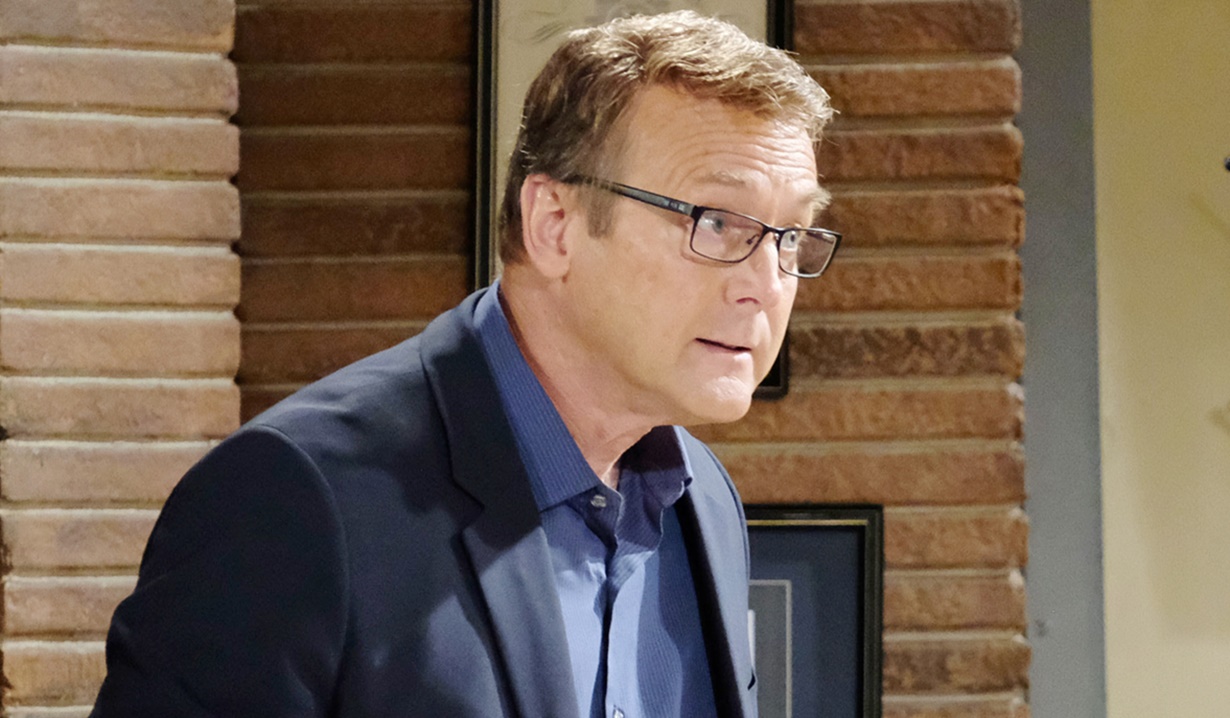 At Jabot, Jack tells Gloria to contact all department heads to discuss the transition. He then texts Nikki to please call him.

At the Club, Nikki reads Jack’s text. Nearby, Victor tells Michael his people are working to distance him from Design Date. Christine appears with federal agents – Victor needs to come and answer some questions. Michael complains to Chris. The press appears, and Victor announces he’s happy to answer questions and clear his name. Nikki smirks.

Billy, in great spirits, enters Crimson Lights with Phyllis, Nick, and Chelsea, who are all wearing sunglasses, hungover, and seeking coffee after their wild weekend in New Orleans. Chelsea calls to check on the kids, while Nick reflects on shirking responsibilities and worries he sounds old. He decides to go check on the fire investigation.

At the station, Paul reads a report concluding the Underground fire was arson. Elsewhere, Christine and Victor arrive. Victor steps into Paul’s empty office, and Nick shows up. Vic complains about Christine’s ‘fishing expedition’. Paul appears and Victor figures they’ll try to pin responsibility for the fire on Nick. Paul ushers Vic out, but confirms the thinking.

Nick admits he was angry about the situation, but denies he committed arson. They discuss the night in question, and Paul claims Reed heard him return a second time. Nick says he didn’t come back. If Paul figures out who it was, he might learn who started the fire. After, Nick and Paul are examining the photo found at the fire – Victor passes by and says it’s Brent Davis. Chris calls Victor and Michael into an office and grills the Mustache on his relationship with Zach and the earnings from Design Date. When Chris asks if he ever had sex with a young woman from the sex ring, Vic accuses her of being upset a judge commuted his sentence. Michael thinks she’s bordering on harassment. Chris assures Victor she has friends in high places urging her to vigorously pursue this. As Victor prepares to leave, Paul appears with the gun that killed Zach – it belongs to a Newman.

Billy and Phyllis arrive at Jabot, where he bends her backwards over Gloria’s desk to kiss her. Jack appears, notes they’ve kissed and made up, and urges Phyllis to check email for changes she needs to know about. She does, then confronts Jack about taking a leave of absence.

He asks her to get along with Ashley while he’s gone. Once alone, Jack thanks Billy for keeping the secret of Dina’s Alzheimer’s. As Billy leaves, Nikki arrives. Jack takes her into his office and emotionally explains his protectiveness over Dina. He doesn’t want it to be public knowledge, but reveals Dina has Alzheimer’s. Talk turns to whether Jack can look after his mother. Nikki warns the situation will become unmanageable, and offers to help. Jack thinks it’s time they ‘step away’. Nikki tears up, realizing it’s because Dina hates seeing them together, and says she’ll miss him. Later, Billy returns to pick up Phyllis. They establish that they’re ‘good’ now, and kiss in the elevator as they leave.

At the Abbott house, Dina stands in the living room, looking lost. Later, Jack arrives and informs her he’s taking time off work to spend time with her. Dina doesn’t want him hovering and suggests he spend time with his wife, Patty. When Dina trots off to make tea, Nick arrives to ask if Jack has any idea how the photo of Brent Davis might have ended up in his bar.

They puzzle over the situation. Nick gets insistent about speaking to Dina since he’s in trouble. Nick points out Dina stuck a knife in Nikki, behavior which indicates she may have started the fire. Jack makes him leave, but Nick warns he won’t drop this. After, Jack questions Dina about Halloween and the bar. He recalls the album going missing and plays the record. Dina tears up that the photo represented bad memories that she wanted to end. She remembers being at The Underground that night and wonders if she really could have started that fire. “Oh my God, Jack, what is happening to me?” Jack holds her.

At the Club, Chelsea warns Nick about jumping to conclusions where Dina’s concerned. Nick feels Jack was acting shifty, but sighs that she may be right. Phyllis and Billy appear, ready to party some more. Bourbons are passed out and they toast to partners in crime and the ‘thing’ that happened in New Orleans that will never be spoken of again.

Jordan alludes to giving Hilary something to remember him by. She asks, “What does that mean?” He replies, “Stay tuned.”

Victor says, “So you think this is the stand the company should take?” Victoria replies, “Of course.” Victor points out, “I don’t think Abby will see it that way.”

Tessa tells Nikki, “I didn’t want to interrupt you and Chief Williams.” Nikki replies, “He and I are done. You and I are just getting started.”

Jordan Gets Revenge as Hilary's Nude...