Tuesday November 21, 2017: Scott and Abby team up, Mariah breaks up with Devon, and Jordan exposes Hilary on live TV. 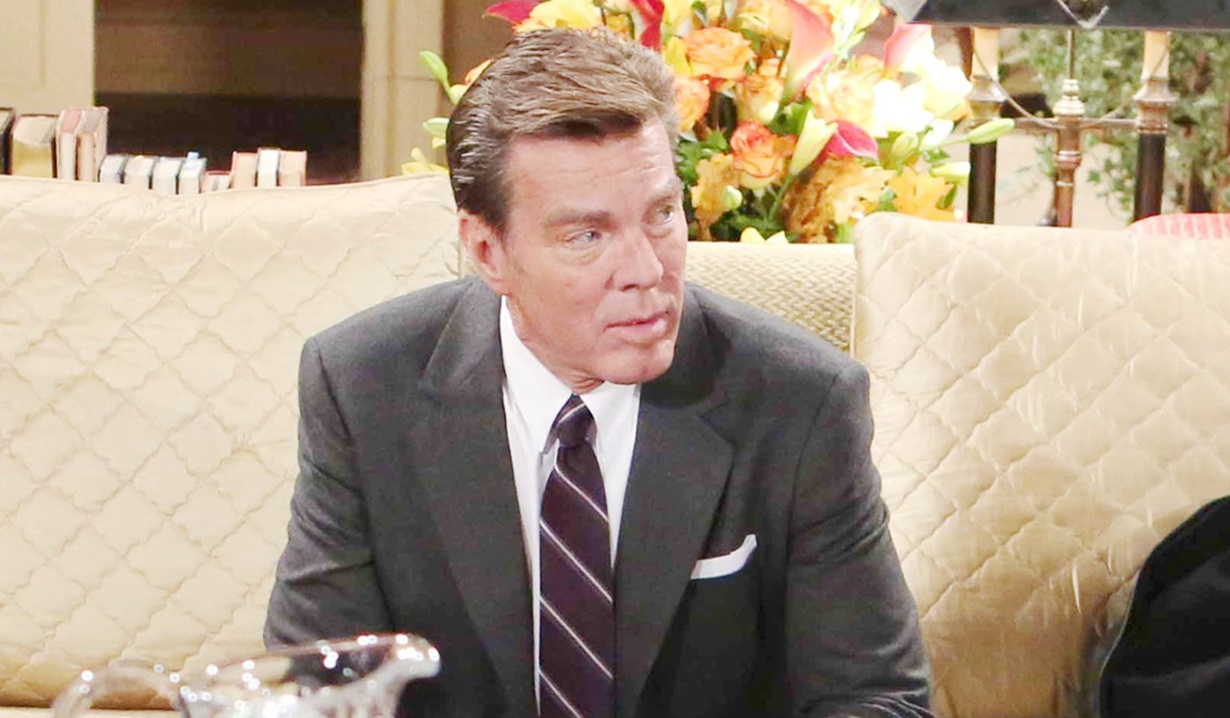 At the Club, Hilary takes her show live online. Nearby Victoria coaxes Nikki to join them at the ranch for Thanksgiving. Nikki says Jack asked her for dinner, though she almost didn’t accept since Dina will be there. Victoria gets distracted by work on her phone and Nikki reminds her about balance. Vikki leaves the table and runs into Hilary and her cameraman seeking a statement on the sex ring and Zach’s death. Vikki says the deceased wasn’t a Newman employee, and gets testy when Hilary asks about her health. After, Nikki confronts her about ambushing her daughter. They spar verbally until Jordan appears and Hilary zones in on him. In the dining area, Devon sits talking with Tessa and gets a call she’s been connected to the sex ring news, so they must be proactive. In Crimson Lights, Mariah and Sharon are watching Hilary live when Scott enters – he’s been having nightmares. Sharon remarks it must have been awful being trapped in that room, as Abby appears. Abby snaps at Sharon but apologizes. Scott chats with Mariah about Tessa being relieved that Zach’s out of the picture. After, Sharon reminds Mariah she agreed to talk with Devon today. She rejoins Scott, who is recording the details of his encounter with Zach, then is summoned by Victoria.

At the Abbott house, Ashley and Jack reflect on a childhood Thanksgiving holiday before talk turns to telling Dina her diagnosis. Ashley arranges to pick up Traci over the phone. After, Jack opines that they should tell everyone together, but waffles about telling Dina. Ashley feels she’d want to know. Nikki arrives, and complains that Dina hasn’t even apologized. Ash cautions she wasn’t herself. Nikki goes on about Dina’s track record of being a bitch and Jack shouts she can’t talk that way about his mother. Ash heads upstairs, and Nikki starts in on Dina again. Jack throws her out and disinvites her from Thanksgiving. Ash reappears and Jack wonders if he can’t say Alzheimer’s to Nikki, how he’ll ever tell Dina. Later, Dina appears and announces she already knows she has Alzheimer’s – Graham took her to a doctor and she was diagnosed. Jack asks why she submitted to more testing. She asks, “What tests?” Dina goes back to her room, and Ashley’s furious Graham didn’t tell them – he took advantage of a vulnerable person. Jack wants to make it a Thanksgiving to remember.

At Newman, Victoria is happy to see Abby, but they quickly square off over the press release. Vikki sniffs it wasn’t really a stretch given her history. Abby asks where she gets off. Victoria informs her she’ll be placed in a division where she can’t cause any more trouble. Abby storms out past Scott, and updates him on her demotion. Scott joins Victoria, who informs him that she’s shutting Hashtag down, but they’ll continue to employ him. Scott wants to involve Victor, and argues that he’s been working on the sex ring story for months. They bicker until Victoria pronounces the meeting over. Scott runs into Abby by the elevator and they agree to work together to stop Victoria. They exchange a glance after their hands touch when they shake on it. Abby snarks that taking down a mutual enemy’s the only reason she’d team up with him. Scott goes, and Abby returns to Vikki’s office to warn her not to get too comfortable in the COO chair.

At the Club, Mariah joins Devon and Tessa, who takes off. Devon feels like something is going on between the girls, but Mariah wants to talk about them. She tells him how amazing he is before blurting, “I’m not sure that I should be your girlfriend.” At the bar, Hilary makes nice with Jordan and asks why he hung onto the fake IDs. Jordan knows her cameraman’s taping and learns it’s live. He looks into the camera and reveals that Hilary Curtis is an alias…how will she explain to her viewers she’s Anne Turner? Hilary angrily orders the cameraman away. At the table, Mariah launches into a lengthy explanation about why she doesn’t do love. She doesn’t think Devon loves her either, and knows this wasn’t meant to be. Devon establishes they can still be friends. At the bar, Hilary lays into Jordan about bringing up ancient history. Jordan retorts that if you wreck someone’s life, they’ll wreck yours. Devon intervenes and hopes that wasn’t a threat. After, Hilary thanks him. Devon reveals that he and Mariah just split up. Hilary is sorry and pulls him into a hug.

Mariah returns to the coffeehouse and Tessa wants to talk. She suggests Tessa just ask Devon.

At home, Scott complains to Sharon about Victoria quashing his story. She massages his shoulders and they kiss. When he pulls back, he sees Abby.

Abby asks Victoria if she just called her a ‘failed experiment’.

Victor asks Nikki, “What are you doing here?” Nikki replies, “Well I came to spend part of the holiday with my family, and I’m not alone.”

Ashley and Jack Break Down While...