Lily Accuses Victoria of Throwing Abby Under the Bus 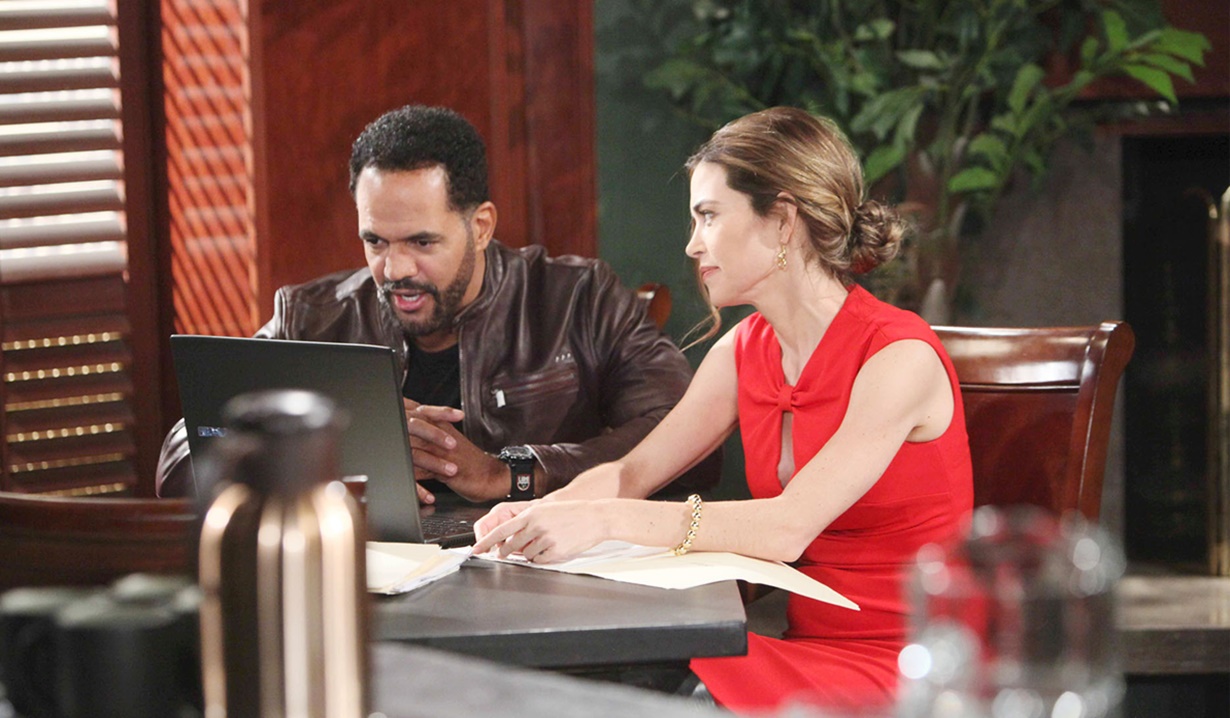 In the storage unit, Scott is irked to be awakened by Abby knocking. He grunts that no one is coming, but she thinks their disappearance is the biggest news in Genoa City. They root through boxes and Abby finds immigration visas.

As she beats herself up for falling for Zach, Scott becomes emotional and barks at her to stop talking. Abby reminds him the last time he was in trouble, he made it out, and they will escape again. As Scott exhales, she talks about how they’ll find Zach, who doesn’t stand a chance with the two of them working together. Scott lets Abby hold his hand. Comforting him leads to a kiss, and then more kissing.

At Jabot, Phyllis is thrilled Newman Enterprises is in hot water. Jack’s concerned about Abby, and explains what happened at the party. He reveals he and Victor put their animosity aside to offer a reward for Abby’s return, but is frustrated with the media coverage. Phyllis suggests he tell the story another way, and offers to pitch his angle to Hilary. Jack appreciates her support. Phyllis places her hand on his arm. “Of course.”

At Crimson Lights, Sharon grouses to Paul about Newman Enterprises scandal taking the media spotlight from Scott’s disappearance. Paul promises to find Scott, Crystal, and Abby. Later, Jack comes in with Dina, who vents about having to undergo tests at the hospital, and Nikki calling her a bitch. Sharon asks about Abby. Dina is stunned to hear her granddaughter’s missing. Sharon apologizes, then is called over by Paul, who has a lead – the GPS coordinates of Scott’s last phone call. Paul spots Dina, and realizes the coordinates are close to where she was found the other night. At their table, Dina cries to Jack that Abby adored that boy, Zach. Jack summons Paul to issue a missing persons alert, so Sharon joins Dina, and learns she was at a place called ‘Roadside’, but didn’t go in.

In Victor’s office, Neil and Victoria are in crisis mode when Lily arrives to confront Victoria about her contract and cut in pay. Victoria, impatient, informs her she’ll receive the package for every new employee. Neil tries unsuccessfully to intervene. After Lily reveals that Juliet passed away and her baby’s in the NICU, Victoria steps away to call legal. Lily comments to Neil on Victoria’s coldness. Neil feels she’s out to prove herself. When they rejoin Victoria, she wants to issue a press release making it clear Abby was the only one working on Design Date. Lily questions Vikki throwing her missing sister under the bus. Neil suggests they paint Abby as an innocent victim, but Victoria nixes the idea. She instructs Lily to have Design Date taken down. Neil walks out with Lily, who presses him about going to bat for Abby. Meanwhile, Victoria sends Abby a worried text, and hopes she’s okay. Neil rejoins her and she dictates a release distancing Newman from Abby’s Design Date, and saying she’s COO and nothing like this scandal will ever happen again. Neil wonders if Victor’s on board. Victoria says he gave her full authority.

More: Justin Hartley, This Is Us actors in People

At the Club bar, Cane thanks Hilary for going to Juliet’s memorial. She can’t believe her father didn’t even show up, and asks where Cane and his son go from here. Cane plans to be there for his newborn. Hilary notes Lily came to the hospital, but Cane doubts there will be any change on the divorce front. Hilary gets a text, and kisses Cane’s cheek before stepping away to call Mattie to warn Cane needs her and Charlie’s support.

At home, Mattie hangs up from Hilary and discusses Cane’s situation with Charlie, who reminds her he was always there for them – they should suck it up and do what’s right.

At The Top of the Tower, Phyllis pitches Hilary a story about Abby’s disappearance. Hilary agrees and says, “Anything for Jack.” Phyllis learns Hilary hasn’t been covering the Newman scandal because she was at Juliet’s funeral. Hil expresses regret for not being a good friend to Juliet and Phyllis tries to make her feel better. Talk turns to Hilary’s discovery in Jordan’s suite, and the scene at Phyllis’ apartment. Phyllis admits she’s worried her relationship with Billy is just based on drama. They switch gears to Devon. Hilary regrets causing drama so things wouldn’t get boring, and warns Phyllis, if she loves Billy, not to make the same mistake she did.

Mattie and Charlie greet Cane at the Club and try to get him to eat; it’s their turn to take care of him. Cane reveals he was at Juliet’s funeral, and Charlie feels guilty for not being able to save her. Cane reassures him, and tells Mattie the baby is ‘hanging in’. Lily appears as Cane is hugging the twins.

At GC Buzz, Chelsea advises Jordan to get out of there while he still can, but Jordan tells her he’s sticking around to make sure this mess doesn’t get any worse.

Mariah asks Hilary, “What is it?” Hilary replies, “Breaking news.”

Sharon stands beside Paul as he opens the door to the storage unit. They look inside.

Nick Intervenes When Sharon and...

The Hilary Hour Exposes Chelsea As...