Nick Intervenes When Sharon and Lauren Clash Over Scott’s Disappearance

Tuesday November 14, 2017: Dina returns, Jack and Victor team up, and Newman Enterprises receives a visit from the FBI. 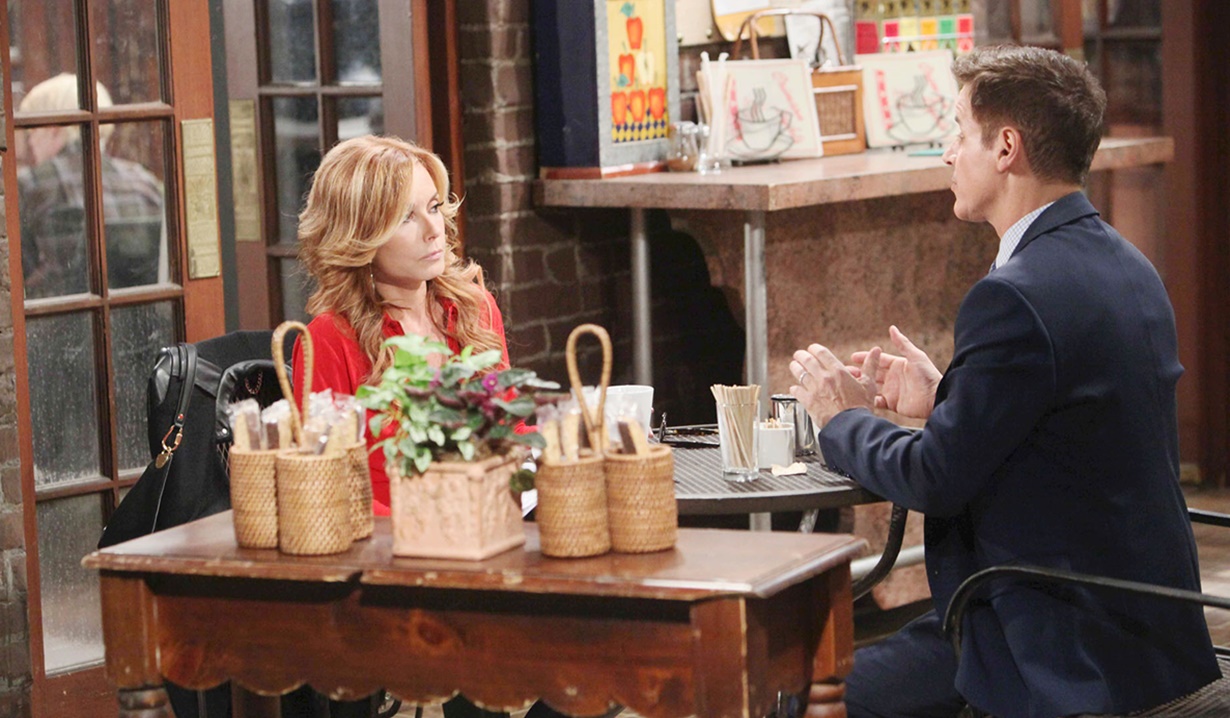 Victoria arrives at Newman Enterprises and learns Victor’s stepped up the search for Abby. Vikki points out she left willingly with Zach, and starts discussing PR, but her father’s not interested. He apologizes, and they discuss Abby’s involvement with Zach. Victor vows he’ll regret messing with him. Later, Victoria is impatient to get on with defending Newman Enterprises against the allegations, and suggests Abby may have run off to get Victor’s attention. Victor updates her on Zach setting up Scott for murder. Victoria is stunned. Victor reiterates they must find Abby – this is a nightmare.

At the hospital, Nick has arrived to see Nikki, and marvels about her being stabbed by Dina Mergeron. Nikki hopes they find her and put her away.

At Crimson Lights, Sharon breaks a glass and Michael understands she’s concerned about Scott – they all are. As he tends to her bleeding hand, Sharon asks if they’ve heard from Scott. Lauren appears and snaps, “No. We haven’t.” The couple adjourns to the patio and bickers about whether Sharon’s responsible for Scott’s disappearance.

Michael reminds his wife that she and Sharon both care about Scott, who is experienced and resourceful. Michael gets called away. Inside, Paul informs Sharon that a team is searching for Scott, but her texts and messages are interfering with his work. After, Lauren strolls inside and clashes with Sharon – none of this would have happened had she not seduced her son. Sharon suggests she leave; she’s scaring away the customers. They argue heatedly about Sharon involving Scott in her cause. Sharon protests that this mattered to him; she didn’t force him to do anything. Lauren is hollering at Sharon to stay away from her son when Nick arrives and breaks it up. Nick and Sharon sit.

She thanks him for intervening with Lauren, before talk turns to Nikki’s catfight with Dina. Nick notes no one called him; he refuses to let his estrangement from Victor cut him off any further from his family. Sharon starts to cry about Scott – she’s worried he’s in danger and thinks her feelings are stronger than she realized. Nick can’t stand him, but thinks he’s a lucky guy. They hug as Nick leaves.

At Jabot, Ashley and Jack are discussing Dina and Abby when a police officer arrives with their mother, who recounts how she slipped into the backseat of a car at the party and was later found by the nice officer. Ashley brings up the stabbing and Dina wants their help to return to Paris. Jack and Ashley step out and decide they must turn their mother in. Soon, Paul and Michael arrive. Paul arrests Dina, who cheekily asks if he’d like to cuff her. The chief declines and assures Jack he can take Dina to the hospital after she’s booked.

At the hospital, Nikki is appalled to see Dina, and Michael explains she was released on bail. The women trade barbs and Jack is apologetic.

Nikki arrives at Newman and flips out when she learns Abby’s been kidnapped by a murderer and they haven’t told Ashley. Vic agrees to call.

Still at the hospital, Michael is discussing Dina’s defense with Jack and Ashley when Victor calls Ash about Abby. She drops the phone. Later, Michael asks Dina where she was when the officer found her. She says, “Roadside.”

Ashley and Jack arrive at Newman and when Victoria suggests Abby knew about the sex ring, they’re offended. Ash orders her out, but Vikki reveals she’s COO. Jack thinks she’s using Abby’s situation to divert attention from her own recent scandals. Talk turns to Victor and Victoria blindsiding Abby at the party.

The arguing escalates until Nikki hollers at them to stop – Abby belongs to all of them and they must bring her home safely. Next, Nikki takes Vikki to task for implying Abby would knowingly back a sex ring. Vikki sniffs that love can make you do strange things. Nikki warns her daughter about letting what happened with Billy influence her viewpoint, or letting Newman destroy her soul. Nikki wants a plan of action, so Jack and Victor agree to put up $5 million each for Abby’s safe return. They are implementing the plan when the FBI shows up, and citing association with the sex trafficking ring, produces a warrant to seize Newman’s computers and freeze the company’s assets.

Abby says to Scott, “You are wrong, help is coming. My family will not rest until we are found.”

Lily asks Victoria, “Your sister is missing and you’re going to throw her under the bus?”

Paul tells Sharon, “We might have got our first break.” She replies, “Finally! What is it?” Paul says, “The GPS coordinates of Scott’s last phone call.”

Zach Locks Scott and Abby in a...