Thursday November 2, 2017: Mariah makes an admission, Hilary and Jordan clash, and Cane rushes to The Underground. 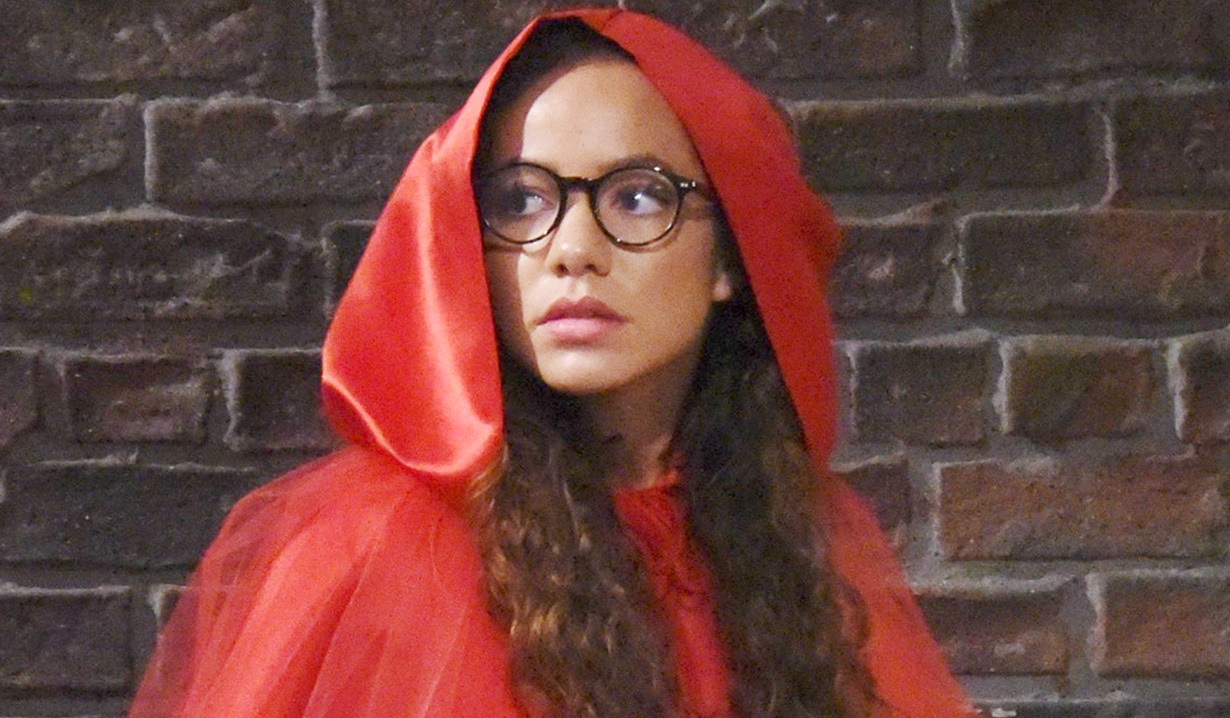 In the office of The Underground, Mattie, Reed, and Charlie fret about being caught in the establishment when they’re not supposed to be there. Mattie smells something, realizes there’s a fire, and exclaims, “Oh my God!”

In the Ashby living room, Cane texts the teens to remind them of curfew at 10:00 PM, then begins to nod off.

At Sharon’s place, Mariah rambles on about Halloween candy. Her mother questions her about bailing on her plans, and asks what’s going on. Mariah tries to put her off, but Sharon is certain she’s having relationship troubles, and presumes the excitement is wearing off with Devon. Mariah cries that Devon is great; he’s everything she could want in a man. Sharon supposes that Mariah is doubting herself and reassures her, but Mariah blurts that no one knows who she really is. She sobs that she walks around cracking jokes, playing a part, and is tired of pretending. Mariah hasn’t had the excitement Sharon described with Devon or anyone she was with before him, but reveals she’s found someone she feels that way about. Sharon learns that it’s a ‘she’, is happy for her daughter, and asks her name. Mariah blurts, “Tessa.” Sharon learns they kissed, and points out she’s Noah’s girlfriend. Mariah protests – she didn’t want this, and Tessa is committed to Noah. Sharon advises Mariah to be herself; she must tell Tessa how she feels, and can’t wait.

At the Club, Jordan reminds Hilary she owes him a date. She takes exception to the term ‘owe’. Jordan goes on that he’ll wait if she’s busy. Hilary informs him he’ll be waiting a long time since she refuses to be someone’s second choice. She reveals how Lily bragged about pushing him into the friendzone and calls him a dog for sniffing around her directly afterward. Jordan croons about how good they are together, but Hilary’s not falling for his act again. Jordan snarks about her acting self-righteous and concedes that he kept his options open. Hilary informs him she demands better. Jordan rips her for getting with the son when she was married to the blind father, and remarks on her jealousy of Lily. They argue until Jordan declares she has bought into her own hype. “You’re a joke, Hilary. All hairspray and nail tips.” Hilary throws water on him. He wishes her a good night.

Billy arrives at Brash & Sassy and takes a call from Reed, who apprises him of the dire situation at The Underground. He says he’s on his way.

At The Underground, Mattie phones for help while Charlie leaves a message for Cane and Reed disconnects from Billy. Charlie argues with the other two; he wants to try to get out. It turns out the door is red hot and jammed closed. As the office begins to fill with smoke, the boys bicker until they hear sirens approaching. Outside, Cane arrives and is held back by the firefighters when he realizes the teens are still in there. Inside, Mattie takes a call from Cane, who assures her the firemen are coming. When their connection is lost, Cane has to be held back again. As the teens lay coughing on the floor of the office, they hear Billy, who has made his way through the fire, call their names. Eventually, he crashes into the office. Reed weakly says, “Billy…” Billy sends the teens on without him, and struggles to get his bearings in the thick smoke. Outside, Cane leaves Lily a voicemail before gratefully embracing his children. Cane is stunned to learn Billy saved their lives. When Reed says Billy is still inside, Cane turns to look at the building in alarm…just as a huge explosion occurs.

Mariah finds Tessa on the patio at Crimson Lights and says she wants them to be honest with each other. She asks if Tessa thinks about the kiss and what it meant. Tessa thinks they talked about it, but Mariah feels they lied about it. The redhead, noting how difficult it is for her, shares her emotions, and asks if the kiss meant something to Tessa as well. Tessa confirms it did. She felt it was beautiful, but it’s too complicated. The moment has passed, and for now they are friends. Mariah doesn’t feel about her friends as she does Tessa. The brunette alludes to her past and protests that Mariah shouldn’t ask any more of her. Mariah is angry, then wrung out and resigned. She wants Tessa in her life, but not like this. Tessa cries as Mariah walks away.

Nick says to Victor, “Don’t worry, Dad, I won’t be coming to you for any help.” Victor gestures angrily as he replies, “You won’t get a dime from me. I don’t care how far down you sink. Not a dime!”

A firefighter tells Jack, “You can’t go in there, sir.” Jack replies, “You’re going to have to restrain me physically. You’re not going to be able to keep me away from my family!”

Billy and Jack Make Amends As the...