Charlie, Mattie, & Reed Trapped As Fire Rips Through the Underground 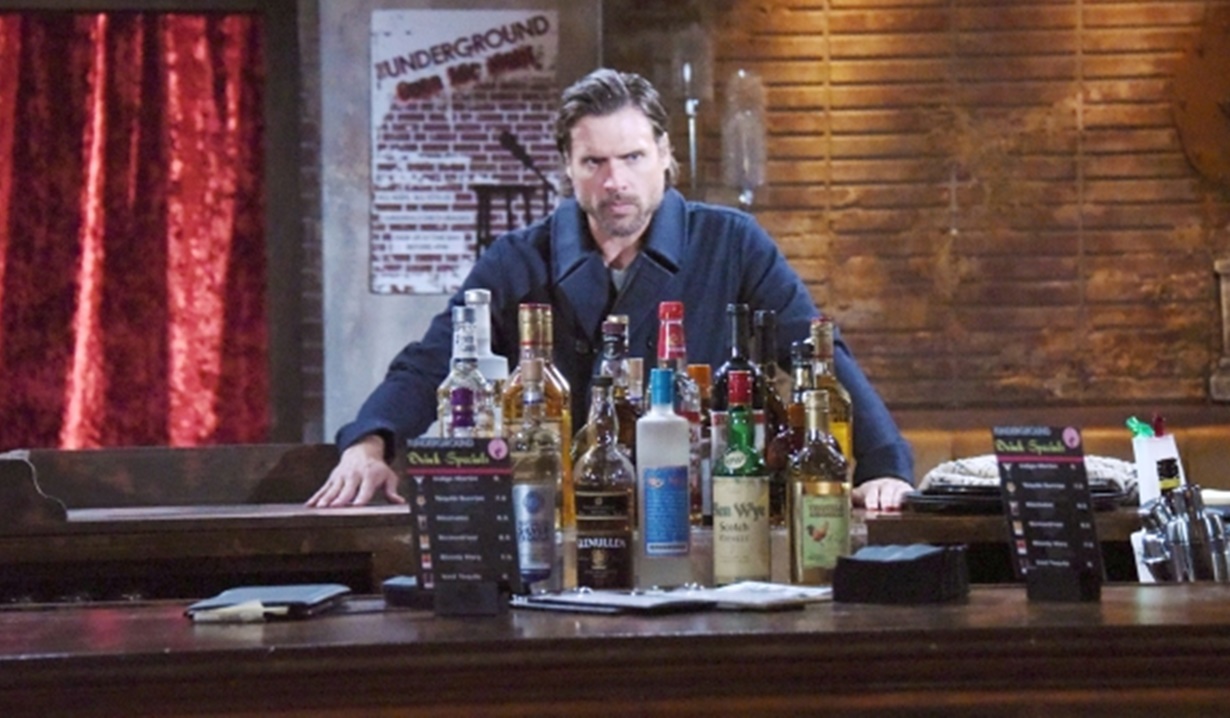 The Ashby twins look wary when they arrive home to find the house dripping in Halloween decorations and Cane using a spooky voice. Reed joins them and trades semi-serious insults with Cane before complimenting his décor. The doorbell rings and the teens welcome the new arrivals as Cane peeks from behind a wall. Before long, Mattie calls ‘time of death’ on the party and groans as Cane walks through warning about stains on the rugs. Reed suggests they take the party on the road. Later, Cane gets a text from Mattie that they’ve gone to Crimson Lights, and watches an old horror flick alone.

By the elevator at Brash & Sassy, Billy informs Victor that Jack sabotaged their product and wants to get down to business dealing with him. Vic needs the facts and the conversation turns to saving the company as Victoria arrives. Billy offers to buy in again, and Victor reiterates his offer as well.

Scott arrives at Sharon’s place complaining that he can’t ignore the guy who set him up for murder. Faith comes downstairs and greets the shaggy-haired guest. “Oh, hi! Who are you?” Scott awkwardly attempts to converse with Faith and Sharon explains he’s a writer, which intrigues her daughter. The two get on well as the story of how Scott and Sharon met emerges, and it’s established that he’s her boyfriend. Chelsea and Nick pop in with the boys and Nick takes in Faith doing face-painting on Scott. He whispers to Sharon about Scott’s arrest – he doesn’t want him near Faith. Sharon replies that it’s not up to him.

In Crimson Lights, Devon and Mariah meet up with Noah and Tessa and admire their costumes. Noah and Devon step away, and Mariah tells the brunette she looks amazing. Tessa returns the sentiment. Mariah suggests ‘girl time’ later this week, but Tessa puts her off. On the patio, Reed tells Mattie and Charlie they’ve covered their butts by coming there, but there’s another plan. He asks Noah for the key to The Underground to grab his guitar. Nick and Sharon’s group arrives. Nick pulls Scott aside to warn him away from Faith, but she pulls her new friend away. Billy and Victoria arrive with their kids, followed by Victor, who strolls over to Nick and lets him know Newman bought his liquor supplier and won’t be giving discounts. Nick rejoins Chelsea and glares at Scott having fun with Faith while complaining about his dad. He grunts that he’d rather torch his bar than let Victor ruin his business. He takes off. Meanwhile, Sharon notices Mariah beg off from joining Tessa, Noah, and Devon at the clubs. On the patio, Ashley tells Billy she had her lab run tests on the mask and got the results. It turns out someone used an unregulated manufacturer to cut corners. She wonders who would contemplate such a reckless act. Inside, Scott worries to Sharon it’s not safe for him to hang out with her and Faith in case Zach targets them. Sharon is thrilled he thinks she’s the most important person in his life and they kiss.

More: How to have a soapy Halloween

At the Abbott house, Ashley and Jack mention Dina’s locked herself in her room, before talk turns to the poisoning of Victoria’s product. Ash would love Jack to look her in the eye and deny he was behind it. Jack’s offended and feels it doesn’t matter what he says if she thinks he’s capable of that. Ash gets a call that the tests are back on the face mask. “We’ll find out soon enough.” Later, Jack puts the old album on the record player. When he leaves the room, Dina takes the album and slips out the door.

In the dark Underground, Reed and Charlie reassure a nervous Mattie. They’re about to test the others to come in when Nick shows up so they hide in the office. Nick lights a Jack o’ Lantern at the bar and keeps lighting matches and watching them burn out as he thinks about his troubles. He blows the last one out and leaves. Reed ducks out, sees the Jack o’ Lantern but Nick is gone. He returns to the office. Meanwhile, Dina wanders into the bar. The kids hear someone and stay hidden. At the bar, Dina knocks over some liquor then strikes a match to burn an old photo of Brent Davis. As she meanders out, the bar goes up in flames.

At the Abbott house, Dina replaces the album, and heads upstairs unseen. After, Jack is stunned to see the album back on the turntable.

Jordan tells Hilary, “You’re a joke, Hilary. You’re all hairspray and nail tips.” She throws a glass of water in his face.

Mariah says to Tessa, “Jump in, and tell me if that kiss meant something to you too.”

Firefighters try to hold Cane back from The Underground fire as he hollers, “Charlie, Mattie are you in there?!”

Billy’s Life Hangs in the Balance...