Tuesday October 31, 2017: Victoria runs out of options, Billy and Jack have it out, and Zach warns Scott. 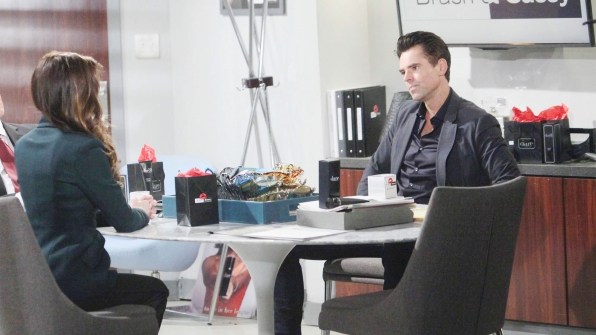 At Brash & Sassy, Victoria is slamming packages around when Victor arrives and suggests they go for a walk. Up at Jabot, Gloria threatens Billy with security, but he’s undeterred and warns her to get Jack in there.

At Crimson Lights, Tessa greets Sharon, who wants to know more about her connection to Zach. On the patio, Zach confronts Scott about his ludicrous theories, and suggests they avoid one another. Abby appears – she agrees, since Scott doesn’t think Zach is good enough for her. Abby sneers about Scott’s lack of success compared to hers, and he ducks out. Inside, Sharon confides in Tessa that they discovered Zach is behind the sex ring that was controlling her sister. In a booth, Victor urges Victoria to take time off to take her kids trick-or-treating. She can’t due to the pressure with the FDA. Victor assures her she’s not alone in this, but Victoria worries he’ll stop loving her if she disappoints him; as he did Nick. Victor frets at her thinking, and adds, “I could have lost you.” He proposes buying Brash & Sassy and returning it to Newman Enterprises. Victoria appreciates the offer, but she has some ideas of her own. She assures him tonight will be about the kids, and they part ways. Victor makes his way to the patio, where Zach kisses up about Scott’s ‘worthwhile’ expose on the sex ring. He senses Victor has an issue with him. Vic warns Zach that he’ll regret it if he hurts Abby, and will have to deal with him. Inside, Tessa learns from Sharon that Natalia was killed and Zach set him up to stop the expose. Tessa, stunned, believed Zach when he claimed he changed his life, and reveals he owned intimate massage parlors in Chicago and convinced her to work for him. She quit when Zach threatened her. Sharon warns the upset girl she must keep this secret. Tessa isn’t sure she can keep quiet. When Zach joins them, Tessa takes off and Sharon spills his coffee. At the Club, Devon and Neil debate about Victoria’s dilemma. Neil urges Devon to trust her. After, Victoria arrives to meet with them about the bridge loan, which is due soon, and makes a pitch for another loan. Devon refuses, and expects the current loan to be repaid. If she can’t pay, Devon will sell to whoever makes the best offer. After, Neil disagrees with Devon’s decision, but doesn’t want to be at odds with him. At the bar, Zach updates Scott on Tessa and Sharon’s strange behavior around him, and warns him not to print his lies.

At the Abbott mansion, Dina wants Jack or Ashley to run her over to the Club to meet Graham. Jack suggests she move in there…permanently. Dina declines the invitation, and again assures them Graham will keep her company. Abby arrives to catch up with Dina, who goes on about Graham. Ash tries to intervene when Abby wonders why Dina’s not angry with him, and Dina sneers that Ashley’s jealous of her relationship. Jack tells his sister and niece they need to have Dina seen by a doctor. After, Abby continues visiting with her grandmother, who gushes with her granddaughter about Zach. Jack and Ashley arrive at Jabot to find Billy waiting with Gloria. When Jack and Billy step into the office, Ash asks Gloria, “Did you do this?” Glo protests. Ash rephrases, “Were you working on orders from Jack?” When Ashley threatens to call the police, Gloria admits she got her hands on a sample through a dalliance with a lab assistant, but Jack never saw it. She hands it over. Meanwhile, Jack denies tampering with Brash & Sassy’s product and reminds him how he sunk so low as to use Dina and Phyllis. They get into it about their personal issues, and Billy wonders how long he’ll punish him because Phyllis chose him before running down Jack’s past transgressions. Billy still thinks Jack poisoned the masks. Jack angrily denies it and orders him out – of his office and his life. Billy heads down to Brash & Sassy, where Victoria announces she’s repaying the bridge loan with her own funds. Billy offers to buy into the company, but Vikki decides it’s become more toxic than the face mask.

Jack and Ashley arrive at home and square off with Dina, who is shocked when Jack informs her Graham is not at the Club and doesn’t want to see her again.

Billy tells Victor, “Jack’s the one who sabotaged the company, he poisoned the face masks.”

Ashley wants Jack to look her in the eye and tell her he’s not behind it.

The twins look appalled by as Cane announces he has an awesome plan for their Halloween party.

A fire breaks out in The Underground.