After Accusing Zach, Scott Informs Sharon He Made a Big Mistake

Monday October 30, 2017: Jack dupes Graham, Victoria becomes panicked over Brash & Sassy, and Mattie gets Cane to agree to a party. 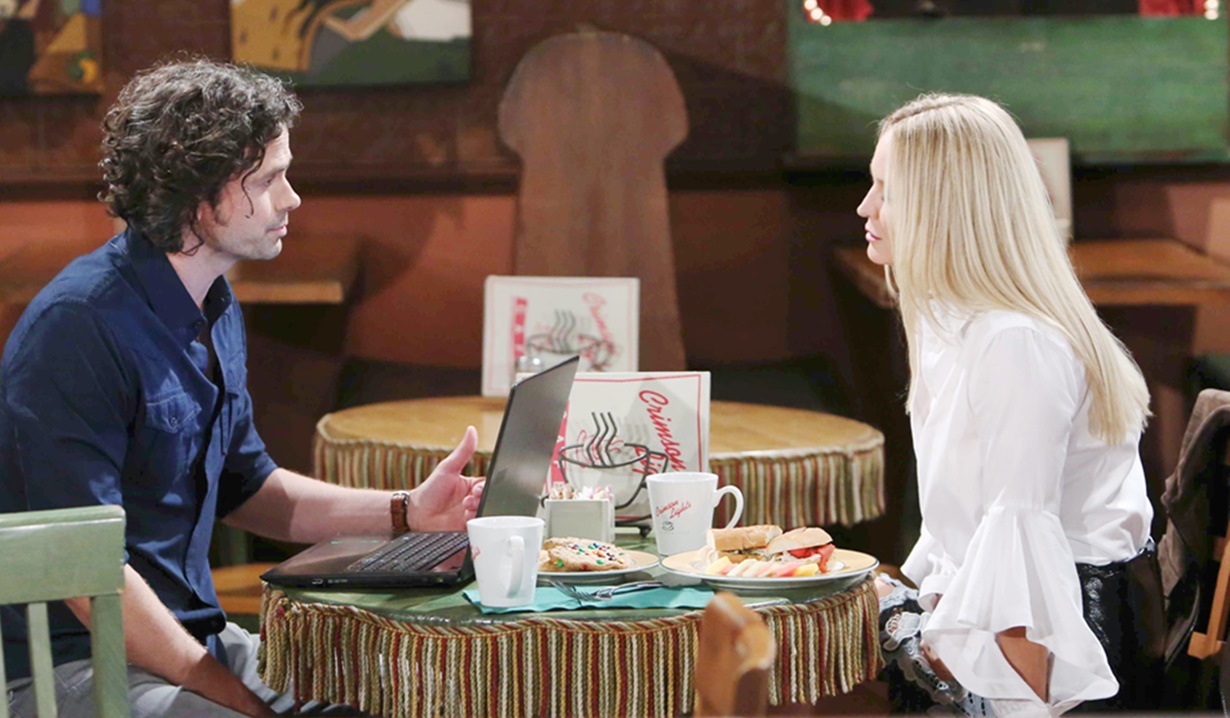 In the hotel in Florida, Ashley and Jack are confounded when Dina appears and chirps happily about them coming for a visit. She apologizes if she seemed out of sorts previously and is confused as to why they’re concerned about Graham – who else would she travel with? Dina remarks happily on Ashley’s award, then trots off. Jack decides her behavior must be due to the stroke. He gets a message from Michael, and says he’ll deal with Graham while Ashley tries to get Dina to come home. Ash walks off, and Graham appears. Jack informs him his power-of-attorney is worthless in Florida, and that he abused his power. He accuses Graham of fraud and elder abuse, noting Michael has alerted the authorities there. Graham wishes him the best of luck with Dina. “You’re going to need it.” Jack calls Michael and reports, “It worked.” Meanwhile, Ashley tells Dina they need her in Genoa City. When Jack joins them, Dina’s been persuaded, but asks about Graham as they’re leaving. Jack says he’s busy, and they keep her on track to the airport as she chatters about going home where she belongs.

At the hospital, Victoria awakens, calls out for Billy, then extricates herself from her IV and starts dressing.

Billy continues to do damage control at Brash & Sassy. Victoria arrives and Billy isn’t sure she’s up to working. She snaps that the decision is made and he brings her up to speed. Billy believes Jack poisoned their product and reminds her of Gloria’s experience in that area. Victoria learns Victor is also on board with this theory. Vikki wants to hit back at Jack in an extreme way by starting some rumors about how far Jabot is willing to go to take down their rivals. Next, Victoria takes an upsetting phone call and breaks the news to Billy that the FDA wants to test all their products, which could result in them having to remove all products from the shelves. Victoria becomes panicked and shouts that it’s a death blow to the company.

In Crimson Lights, Sharon and Scott discuss Zach using the dating app as a front for hookers. Sharon thinks it’s obvious he set Scott up, and Scott should just go to Paul. Scott counters it’s not that simple and indicates Abby and Zach canoodling on the patio as the reason. Sharon is concerned about Scott’s safety, but he reassures her the smart thing to do is pretend they haven’t figured it out and to watch Zach. On the patio, Abby giggles to Zach that they are going ‘very good’ places. Inside, Scott and Sharon prepare for Halloween. Sharon wants Scott to meet Faith; it’s overdue. Scott warns kids don’t like him. Sharon teases him for being nervous. Abby and Zach approach. Abby snarks about the gossip going around about Scott, a motel room, and a prostitute. Scott describes what happened after he left Zach, and states he was framed because of the sex ring he’s investigating. He’s confident the real killer will be caught soon. After, Scott remarks to Sharon that Zach didn’t even react; he’s one scary dude. Elsewhere, Zach assures Abby that Scott’s been through a lot and will be fine. When Scott gets a moment with Abby, she thinks he’s jealous of her amazing life and complains about him putting her father’s company at risk. Scott’s more concerned about her choices. Abby’s confused. He tells her she can do better than Zach and she leaves in a snit. Zach reappears and Scott confronts him about not returning his calls, and confronts him about being the one who set him up, and running the sex ring out of his dating app. Zach denies everything and coolly walks out. Sharon joins Scott, who says he just made a big mistake. At the Ashby house, Charlie is relieved when Cane lets him know he doesn’t want the divorce and won’t give up on a reconciliation. Mattie enters with Cane’s phone, which contains a message from Juliet. She confronts Cane about not telling them he was living with her. Cane explains his reasons for moving her in, and asks them not to let this become a roadblock to their progress. Cane leaves the room, and Charlie suggests to Mattie they should cut him some slack. They talk about convincing Cane to let them hold a Halloween party there. Later, Mattie broaches the subject with Cane, and talks him into agreeing. Charlie’s impressed with her negotiation skills.

Sharon says to Tessa, “I want to talk to you. About Zach.”

Jack hollers, “I didn’t tamper with your product!” Billy asks, “Then who? Did you have Gloria do it?”

Gloria says to Ashley, “Your brother would never.” Ash replies, “Well that leaves you. I’m calling the police.” Gloria pleads, “No, please.”