As Zach Makes Love to Abby, Scott Links Him to the Sex Trafficking Ring 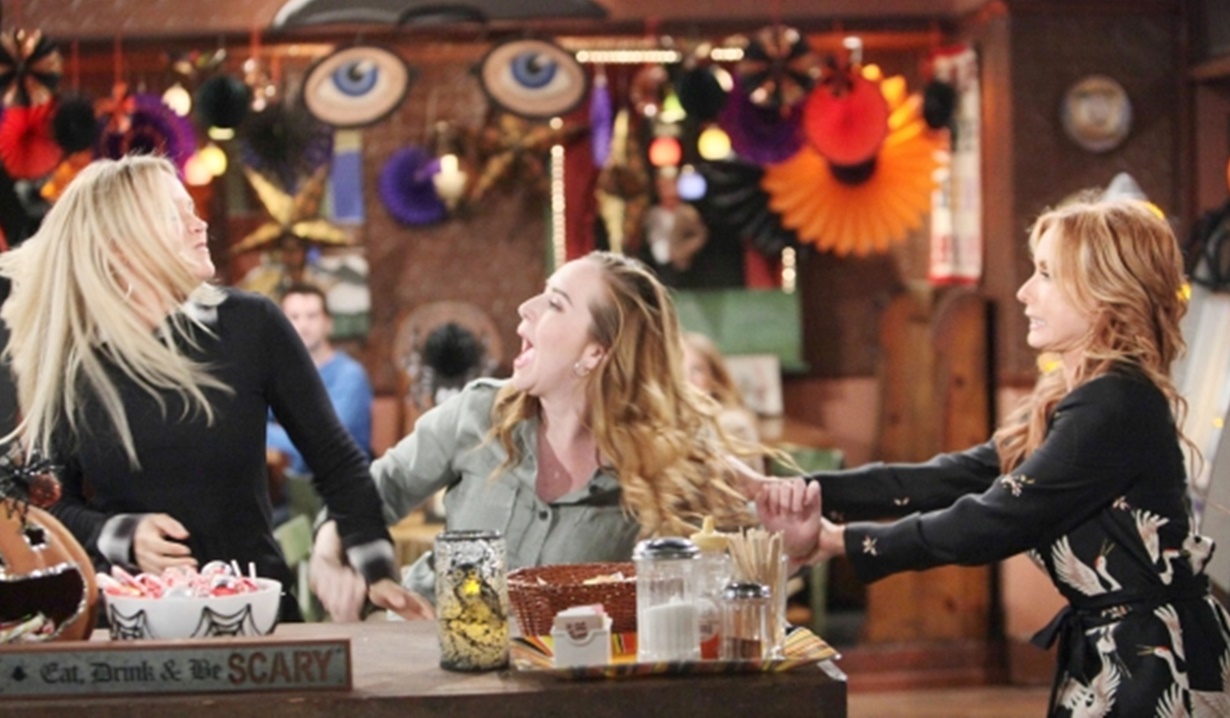 At Brash & Sassy an uptight Billy dispels rumors by phone while ordering lab workers around. Lauren arrives with the story in hand, and they agree it’s a disaster. Lauren is relieved to hear Victoria is stable. Talk turns to Phyllis. Lauren cautions Billy will have to work hard to get her back. She then wonders who would hate Brash & Sassy enough to poison their masks. They exchange a ‘lightbulb’ look and Billy takes off up to Jabot hollering for Jack. Gloria informs him he’s not there, and is stunned when Billy shouts that he tainted their face masks and harmed Victoria. He insinuates that she might have been involved and she smacks him.

In Crimson Lights, Sharon tells Mariah about Scott being in the police station with blood on him. Mariah questions how well she actually knows him. Sharon insists he’s a good man, but Mariah thinks he could be messed up, and might have lost it.

In the station interview room, Scott tries to go over the events of the night before with Michael but breaks down over Natalia being killed. Scott surmises that someone involved in the sex ring knew he was onto them and framed him to shut him up. “It’s my fault.” Michael warns him not to say that to anyone but him. Scott can’t believe Paul would suspect him. Michael shrugs that Paul has to abide by the law. Scott vows to finish his expose…even if he has to do it from behind bars. Michael goes to Paul’s office and argues about Scott until a call comes in that Natalia had roofies in her bloodstream. Michael proposes that Scott was also drugged. Paul argues he tested negative, but Michael retorts that they were already out of his system. Meanwhile, Victor joins Scott, who is furious he threw him under the bus. Victor knows he’s not capable of murder, but warns him not to be arrogant since the person who framed him won’t rest until he’s put away – he must think hard about who his enemy might be. Afterward, Lauren arrives after hearing of Scott’s arrest. When Michael mentions it all started with a girl calling Sharon on the crisis hotline, Lauren storms out.

Lauren busts into Crimson Lights to confront Sharon about being the reason Scott was arrested and framed for murder. Mariah blurts, “Murder? What?” Lauren unleashes about Sharon having ruined the lives of all the men she’s been involved with, and when they get into it about what sort of mothers they are, Mariah has to physically intervene. Sharon wants a life with Scott without Lauren in it, and Lauren counters Sharon should be locked up for stealing Nick’s child. Mariah whistles loudly and threatens to put them live on The Hilary Hour if they don’t stop. In the tackhouse, Abby opens her door to Zach, then closes it in his face. Later, he returns with balloons. Abby rants at length about him breaking up with her by voicemail and threatens to call security. He stops her by saying, “Abby! I love you.” She calls off security, and is mystified when he confesses that he’s someone who doesn’t deserve her. Zach would rather risk everything, however, than be without her. They make love passionately on the sofa.

In Florida, Jack and Ashley puzzle over Dina laughing with Graham. They wonder if she’s acting. Jack steps away to take a call from Gloria, who updates him on Brash & Sassy’s toxic mask and Billy’s accusations. Jack denies responsibility and urges her not to say anything. He disconnects as Graham makes contact and takes them over to Dina, who hisses at Graham for bringing Jack there knowing how much she despises him. She swats Jack’s hand away and trots off angrily. Graham shrugs that he tried to protect them from her true feelings. After, Jack tells Ashley she’s been brainwashed – he won’t leave until they figure this out.

At the Club, Scott has been released and is with Michael and Lauren, who fusses over him. Sharon appears and they kiss while Lauren cringes. Scott thanks Michael and leaves with Sharon. Lauren and Michael sit down and she frets about the possibility of Scott being charged with murder. In Crimson Lights, Scott and Sharon ponder how to proceed. Zach isn’t returning Scott’s calls and he can’t remember anything. They get online to find out the dating services Natalia was using and discover one is linked to a cellphone app – developed by Zach and Abby Newman.

At Brash & Sassy, Victor hounds Billy and asks, “Who the hell poisoned those face masks.” Vic thinks Jack could be the culprit. Billy won’t stop Victor from going after his brother, he’ll help.

Mattie says to Cane, “Of course you have nothing to say, you weren’t even going to tell us you were living with her.”

Jack says to Graham, “Welcome to Florida. Here you have nothing to say about my mother’s decisions.”

Scott says to Zach, “I think you know a hell of a lot about what happened that night. You’re the one who set me up.”