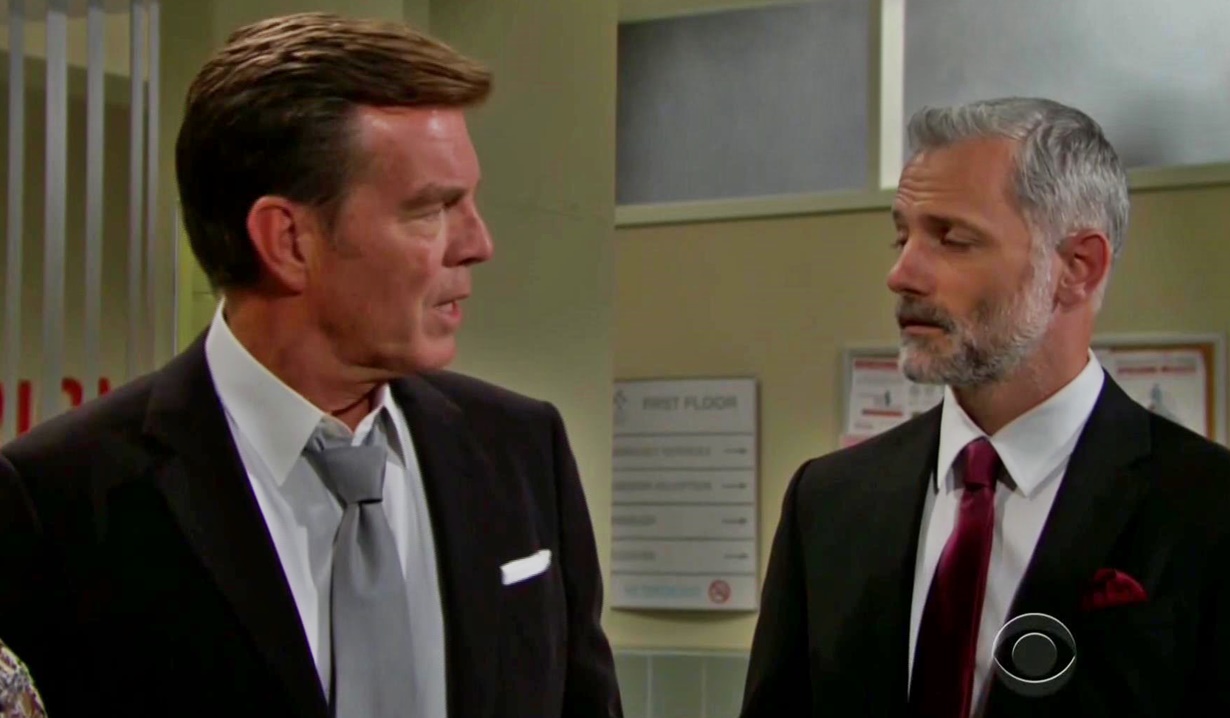 At the hospital, Ashley and Traci complain about Graham having medical power-of-attorney and not letting them see Dina – he’s a master manipulator who had to make sure his revenge was complete. They rehash Ashley’s paternity, with Traci insisting they’re all John’s children. Traci remarks that Dina could have died and wonders if Ash can forgive her. Ash doesn’t know. In Dina’s room, she awakens and Graham tells her she had a minor stroke but will be fine. Dina lets him know she remembers every word of their conversation in the suite – he hates her. Graham tries to explain his anger, but insists he came to care about her and will stay with her until the end – he’s proven his loyalty.

At Jabot, Michael confirms to Jack that Graham’s power-of-attorney is legitimate. Jack wants to know the next steps to getting him out of his mother’s life for good. Michael sighs that it could take months to fight in court. Jack’s incensed. Michael produces a new power-of-attorney for Dina, but Jack will have to get past Graham for her to sign it.

Jack joins Ashley and Traci at the hospital – he has a plan in mind. Graham appears, saying Dina’s forgiven him and is too tired to see them. Traci makes an appeal, and Ashley and Jack chime in to insist they won’t make trouble. Graham might change his mind…if they make it worth his while. A large check is written and the disgruntled Abbott siblings make their way in to see Dina…whose bed is empty.

In the Club dining room, Hilary and Phyllis discuss the events at Ashley’s awards ceremony. Hil won’t air it and jeopardize her friendship with Jack. Talk turns to Victoria. Hilary plans to get back into her good graces. Phyllis warns she’ll never trust her again – she’s a stone cold bitch. Hilary has to do damage control. They agree Vikki’s been ‘over-the-top’ lately. In the gym, Cane happens upon Billy and informs him that he is now the acting CEO of Chancellor Industries. They spar verbally. Billy reveals that they’ve filled Cane’s position with someone who blows him out of the water – his soon-to-be ex-wife. Cane argues she doesn’t have the financial knowledge necessary. Billy says she’ll actually be doing Juliet’s job, noting the irony and justice in that. Cane moves on and runs into Hilary, who urges optimism regarding his marriage. Can will put his energy into something he can control – like his children, or Chancellor. Hilary is amused to hear Lily has Juliet’s old job, until he points out Lily will be spending more time with Jordan.

At Brash & Sassy, Jordan is pleased about Lily’s promotion. Victoria speaks to Lily alone, and they discuss Mattie and Reed. Vikki hopes Cane won’t cause issues. Talk turns to divorce. Vikki remarks that Jordan may be interested in more than friendship with Lily, and since he’s an independent contractor the usual ‘no dating’ policies don’t apply. Vikki urges Lily to go for it. After, Lily gets Jordan alone and confesses to sending mixed signals. She clarifies that for now, she’s focusing on herself and her kids. Later, Billy arrives and talks to Victoria about Ashley’s pain and dishonesty. He regrets deceiving Phyllis. Victoria assures him he’ll never have to do it again, besides, Phyllis wouldn’t hesitate to use him. At Jabot, Phyllis encounters Michael in Jack’s office and puts him on retainer for confidential advice. She reveals she set a trap for Billy, who used her computer to access Jabot files because of Victoria. He is unaware that she knows. Michael is sorry, opines that Victoria is not the problem, and urges her to confront him. Phyllis just wants Brash & Sassy to crash and burn. Michael insists the only solution is to be honest in her relationship. She heads down to Brash & Sassy, where Victoria excuses herself to meet Nick. Billy admits he hasn’t been honest with Phyllis. At the Club door, Jordan assures Lily they’re good. She spots Cane, who invites her to join him. They talk about their new jobs. Cane enthuses that she’ll blow Billy and Victoria away. Cane asks about the kids, then Jordan. Lily doesn’t want to discuss their personal lives. In the gym, Jordan asks Hilary out on a date. Hil replies, “I can’t wait.”

Hilary says to Neil, “I have a favor to ask you.”

Nick says to Phyllis, “When are you two going to get it…you are too good for this guy.”

Victor tells Billy he wants his daughter back in his life. “You’re very close to her, and I think you can persuade her to do so.”

Victoria Strikes a Deal With an...