Friday September 15, 2017: Nikki rats Victor out to Nick, Phyllis and Ravi try to catch a mole, and Ashley digs for proof Graham is up to no good. 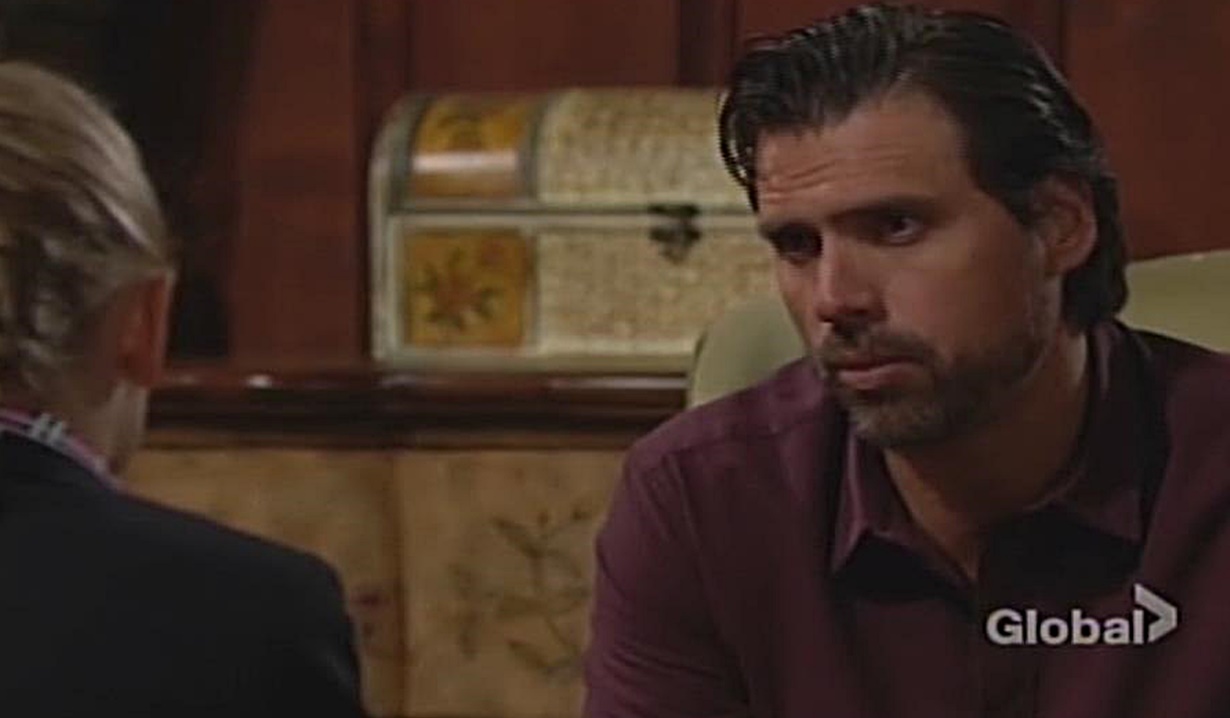 Nikki stops by Sharon’s place to ask her to pick up Faith as something’s come up. Sharon asks if something’s wrong. Nikki alludes to an issue with Victor – who else – and vows he won’t get away with it this time. Sharon heads down to the stables, where Faith remarks she misses living at the ranch.

At The Underground, Victor rubs it in to Nick that without the liquor license he delivered, his investment would have been worthless. Victor shares wisdom on how the real world works and notes Nick’s naivety. Noah sees his grandfather out, after which Nick and Noah celebrate. Nikki arrives, and speaks to Nick alone. He updates her on Victor pulling strings – he won’t let his feelings affect the kids’ relationships with him. Nikki sighs that Victor’s not playing by the same rules – he paid Faith a visit at camp. Nick realizes his father wanted to get to her first and put his spin on things. He’ll have to tell Faith the truth about why they moved. Nikki agrees.

In Brash & Sassy, Vikki has updated Billy on the latest with Cane, and he, in turn, reveals that Phyllis told him Jack suspects they have a spy at Jabot. Victoria warns they’ll have to be careful. Billy assures her that him accessing Phyllis’ computer won’t backfire. Upstairs in Ravi’s office, Phyllis informs the computer tech they may have a mole. She wants him to help her find out how Billy and Victoria got their hands on private information. Ravi deduces that someone may have gained access to the marketing proposal regarding Fenmore’s electronically, and gets to work finding the leak. In Jack’s office, Ashley and Jack discuss her theory that Graham targeted Dina. They need to find out why. Jack shares that Dina divulged that Graham had a rough life and his parents left him penniless on the streets. Dina arrives. They rehash the concerns about confidential files – Dina cannot work there and involve Graham. Dina promises he’ll never read another word of Jabot material, but when Jack exits, she complains to Ashley about their harsh treatment of Graham. Ash confronts her mother with the possibility Graham stalked her – she’s too blinded by her infatuation to see the truth. Dina can prove she’s wrong, and offers her the key to Graham’s suite – she can search every last inch and then apologize, since he has nothing to hide. Later, Victor arrives at Brash & Sassy, and Billy quickly exits. He heads up to Jabot, where Phyllis is still closeted with Ravi, who excuses himself to work from home. Once alone, Billy tells Phyllis they need to talk and apologizes for their last conversation about Jack. He’ll take her out to make up for it. In the corridor, Dina rolls her eyes when Nikki arrives to see Jack. He directs Nikki into his office, where they talk about returning to the Abbott cabin to relax. Nikki’s relieved to hear he’s competing fairly with Victoria. Jack doesn’t wish to damage their relationship. Nikki has a verbal run-in with Dina on her way out. Jack appears and they leave for the cabin. Down in Victoria’s office, she tells ‘Daddy’ she took his marketing advice. Victor wants to see the kids. Victoria will set it up. In the elevator, Victoria learns of Nikki and Jack’s plan. Victoria and Jack put on a pretense about their ‘truce’. In the Jabot corridor, Dina runs into Phyllis and Billy, and snarks that she will betray him just as she betrayed his brother. They gape as she warns, “Get out, Billy. Get out while you still can.”

Nick joins Faith and her mother at Sharon’s house, and learns the girl is ready to compete in equestrian events. Faith squeals upon getting permission – she can’t wait to tell Grandpa. Nick takes this opportunity to reveal he knows Victor visited her at camp, and to explain that he wasn’t honest with her about why they moved. Faith is stunned to hear that Victor told Nick he couldn’t stay on at the ranch. Nick doesn’t want her to resent him. Faith takes off to the stables. Sharon and Nick reflect on Victor screwing him over, and agree to keep an eye on Faith in case he starts pulling her strings again. In the stables, Victor chats with a standoffish Faith. She confronts him about lying to her and kicking her father off the ranch. It was mean and she doesn’t trust him now. Nick calls out and Faith leaves.

At the Club, Ashley lets herself into Graham’s suite and starts rummaging around. In the desk, she finds an incriminating letter – he’s paying $8000 a month for a room at Boca Point Active Living Residence. She opens the door to leave and gasps – Graham is there.

Victor says, “You’re poisoning my grandchildren against me?” Nick replies, “That’s your spin.” Victor tells him, “No son. This one is on you.”

Abby asks Jack and Nikki, “What are you two trying to do, start the final Abbot/Newman war?”

Graham tells Ashley she has ten seconds to start talking, and then he’s calling the police.

A line is drawn between Nick and...