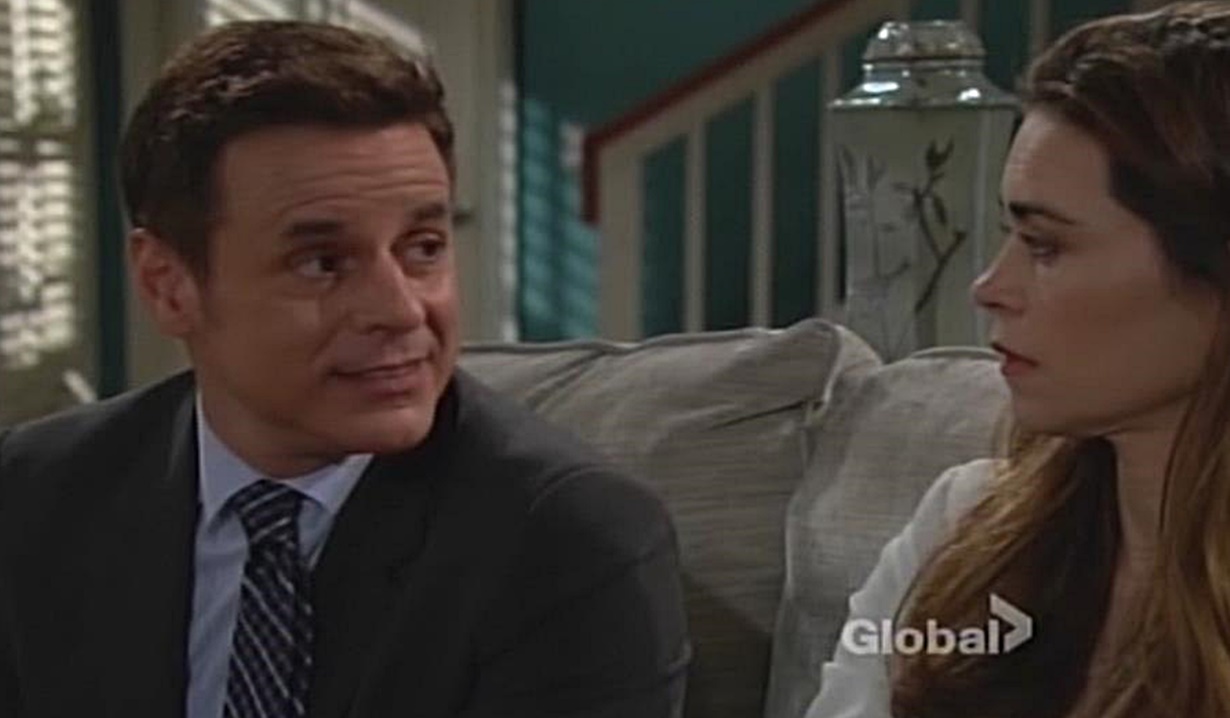 At the ranch, Victor knows Noah has run into an obstacle getting a liquor license for the bar in Ann Arbor, and offers to remove it. Noah wonders how he even knows their business. Victor has his ways and is willing to help – he doesn’t care if Noah tells Nick. Noah wonders if he would get the license legitimately. Victor reminds him the Newman name can help give a push. Noah accepts his help.

At Crimson Lights, Reed tells Mattie that her dad showed up at his house. Mattie feels her father has no right to judge considering his own actions. They embrace sadly, realizing they’ve no idea when they’ll be able to see each other again. They kiss goodbye before going to face the music.

More: Y&R Fall Preview and spoilers for all soaps

In the Ashby house, Cane reports to Lily that the situation with Mattie has escalated as she lied to him. Lily gets the scoop, and is upset that he engaged with her employer’s son. Cane only cares about what’s happening with Mattie, and thinks she should too. Lily still takes issue with him going over there and they argue. Lily doesn’t think he should be surprised that Mattie’s acting out. She reminds him of Neil trying to keep them apart – he probably pushed her into Reed’s arms. They flash to meeting up in the Athletic Club as Mattie comes in. She rants about them being unreasonable, and her and Reed paying the price for what’s going on in her family. Mattie is grounded for two weeks, after which she’ll get her phone back but can’t see Reed anymore. Mattie defends Reed, but Cane declares he’s spoiled like the rest of the Newmans. Mattie lashes out at her father – if he hadn’t slept with Juliet, no one would care about her and Reed being together. Lily asks Cane to leave, then counsels Mattie about how she and Reed could get in over their heads. She knows because she did it. Lily shares her past mistakes and warns her about bending the rules. Mattie snaps about staying in her room because Lily messed up. “How is that fair?”

Michael arrives at Victoria’s house, where she wants to know her legal options to stop Cane. She updates him on the scene between Cane and Reed and details the numerous ways he’s come after her. Michael could probably get a restraining order, but doesn’t recommend escalating the conflict and putting Reed and Mattie in the middle. Victoria sighs – they’re already there. They debate Victoria taking legal action. Michael reminds her she had an overprotective father and only fought harder to prove him wrong. They talk about the nature of teen romances, and Michael advises her to let it go. Victoria asks, “What if Cane doesn’t?” Later, Reed arrives and receives a grounding from Victoria. He’s worried about Mattie. Victoria’s sorry she has to deal with a father like Cane. She warns he’ll make it impossible for the teens to see each other again. At The Underground, Nick and Nikki discuss Chelsea helping Faith feel comfortable. He’s planning a romantic interlude as thanks. Talk turns to the frustrating issues with the liquor license in Ann Arbor. Nikki has faith Nick will work it out. Later, Noah arrives and reports that Grandpa can help them get the liquor license. Nick is irked and doesn’t want Victor anywhere near their business. As Noah’s defending the idea, Victor walks in with paperwork indicating the license will be sent to them shortly. Nick thanks him, but warns it was a one-time thing.

Nikki arrives at the ranch and she and Victor bicker about whether he should see Faith, who is at the stable. Victor doesn’t care what her parents want and tells Nikki to show herself out. Nikki joins Faith in the stables and chats with her about her new living arrangements. Faith inadvertently reveals that she found out Nick had moved while she was still at camp. After, Nikki calls the camp director and learns that Victor visited Faith there.

At the Club, Michael joins Cane to warn him about confronting a minor in the home of a woman who fired him. “Do not stir things up,” Michael advises, and adds that if he goes after Victoria’s family or company he’ll regret it. Cane laughs at the threats and at Michael telling him not to push Victoria’s buttons.

Phyllis says, “Pump the brakes just for a moment.” Dina interrupts and tells Billy, “She will betray you just like she betrayed your brother.”

Faith, upset, says to Victor, “You lied to me, Grandpa. How could you be so mean to him? You said you’d never lie to me.”

Victoria throws Cane out of her...

Nick stuns Faith by revealing that...