Tuesday September 12, 2017: Jack gets Dina to open up, Phyllis finds something suspicious, and Victoria and Billy take Johnny to school. 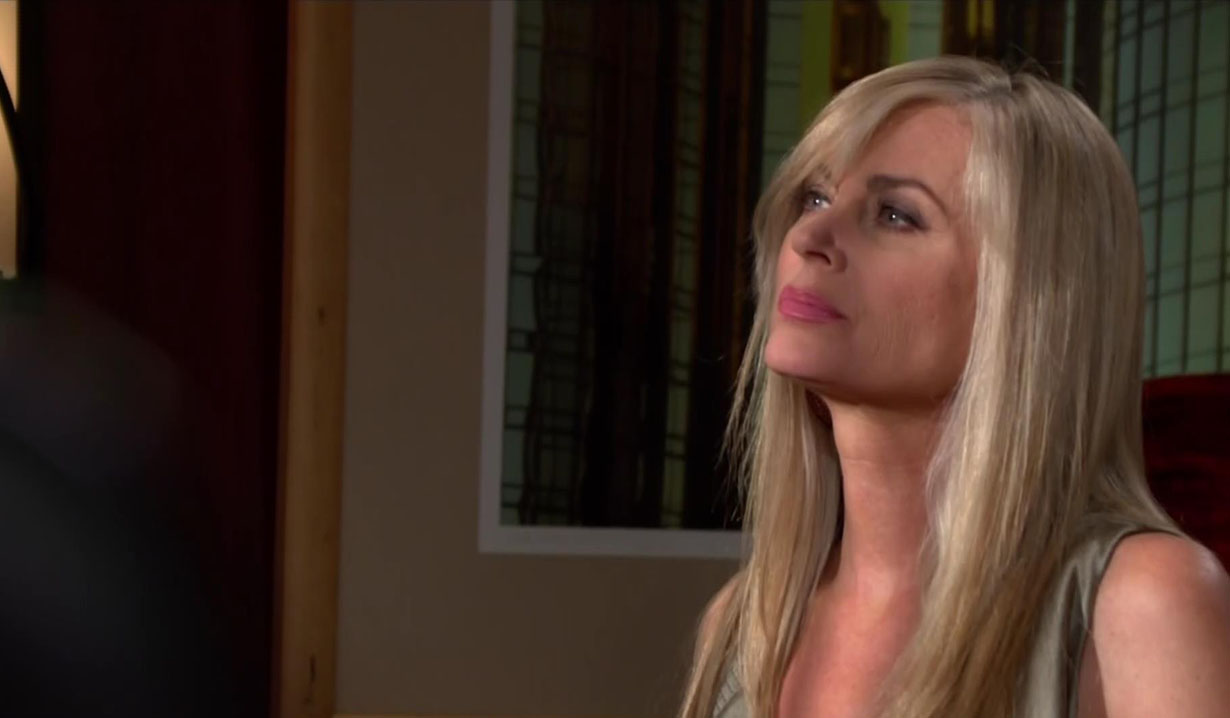 Phyllis is at the club beating up her eggs and drinking a screwdriver when Hilary joins her in time to hear her friend vent about Victoria. She has a plan to fix things. Hilary wonders if she’s planning to get pregnant. Phyllis says she has a better way to fight. She’s committed to proving she can make a happy family with Billy. After Hilary leaves, Lauren joins Phyllis and they go over sales figures. “That doesn’t make sense,” Phyllis notices, suggesting that Victoria has been manipulating sales. They argue over the data.

Mattie is at Crimson Lights looking at photos of Reed on her phone when Cane interrupts. They talk about school and how awkward things are at home. After she gets a text, he leaves. Billy shows up at Victoria’s to bring his son to school. He’s glad they can do that together. So is she. They imagine the child’s future and discuss his past. When Johnny comes in, he declares he doesn’t want to go to school. His tummy tingles. Reed strolls in and assures his brother that he was nervous when he started school too. Johnny’s not impressed. In unison, his parents promise things will be okay. Eventually, he caves and Reed snaps a family photo. After the adults leave, Mattie calls Reed. He tells her he’s home alone and asks her over. Soon, she shows up and breaks the news that Hilary saw them together. Mattie thinks they can trust her to stay quiet. He doesn’t want to talk about their ‘lame’ parents when they can make out.

Ashley finds Jack at Jabot and informs him that Graham has left the country. They wonder about the timing. Jack thinks that Graham may have tried to set up a rift between them and their mother. She suggests he talk to Dina alone. Later, Ashley calls Neil over. He brings her a copy of Graham’s personnel file for Mergeron. They discuss everything he’s done with Devon at their new company. Once he exits, she thinks over her doubts about Graham until Ravi interrupts. She goes through Graham’s file with him. Graham went from an actor to an executive to an heir with no qualifications. She calls Mergeron and confirms that Dina hired Graham even though he’d been turned down many times. Ashley thinks he must have been stalking her mother.

Billy and Victoria arrive at Brash & Sassy, laughing and looking at pictures of their son. They discuss their great teamwork and then go over sales figures. She says she will do whatever it takes to stay on top.

More: The latest news from YR and the other soaps Jack drops by his mom’s room. She guesses he’s not there for a friendly talk. He tells her to relax. They discuss her giving access to internal information and says she can’t continue working at Jabot if Graham is part of that. Jack asks what she’s been holding back about him. Dina explains that Graham caught someone selling company secrets and told her about it. She owes him and he’s had a rough life and has no family.

At the café, Cane bumps into Neil and they catch up on Lily and the kids. Neil doesn’t think they can pretend that all is forgiven. Cane insists that having a baby with Juliet does not mean he has to give up his family. His father-in-law says they’ll have to wait and see. After he walks off, Hilary emerges, clapping. She’s sarcastic and pokes Cane about getting a job. He gets a call informing him that Mattie is not in class.

“Someone is manipulating their sales figures at Jabot’s expense. This has your boyfriend wriiten all over it,” Jack tells Phyllis.

“What if there is someone else out there that is perfect for me?” Mariah tells Devon.

“She was a good girl but she’s not anymore thanks to you!” Cane lectures Reed. “What the hell are you doing in my house?” Victoria asks.

Victoria throws Cane out of her...