All bets are off between Victoria and Phyllis 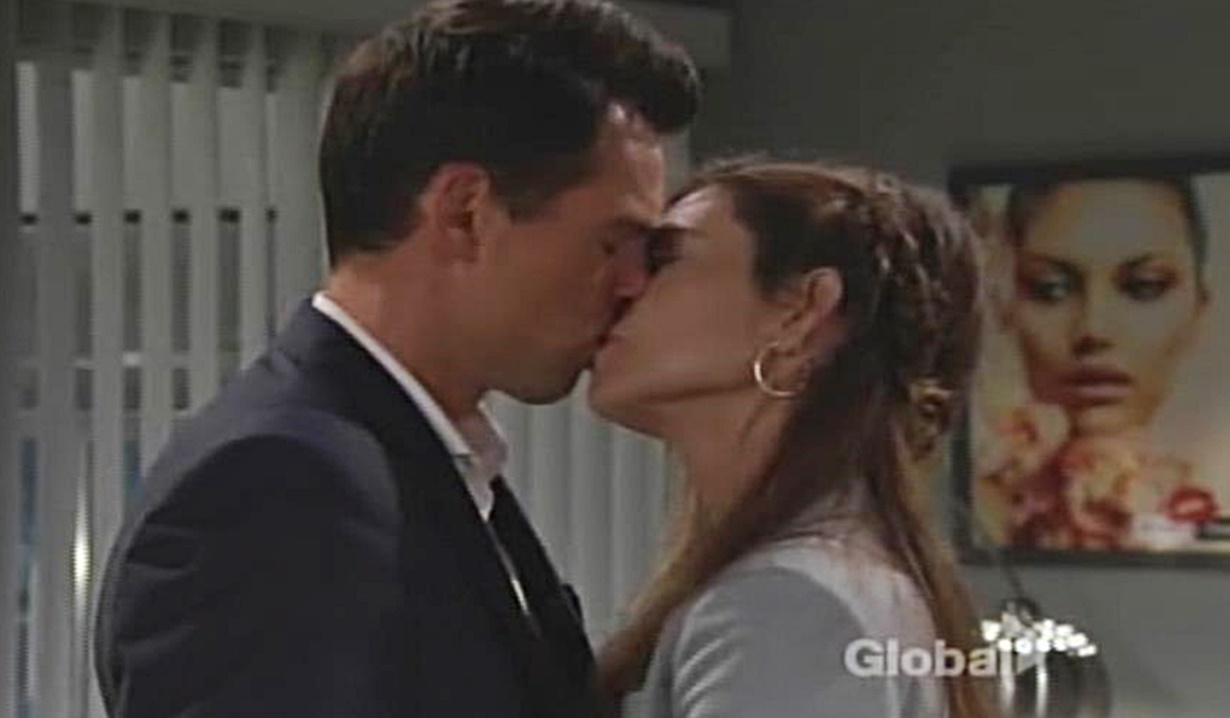 In the Club dining room, Jack chides Hilary for upsetting Nikki with her footage. Hilary defends herself.

Talk turns to Victor. Hilary wonders if Jack’s seeing Nikki to irk The Mustache. Jack denies it, and reveals he’d like Hilary’s help with a plan. He knows her show can spike trends, and wants her to promote their new skincare line. Hil worries about backlash from Victoria, who’s already declared war. Jack tells Hil if she does this, he’ll owe her one. She agrees. In Dina’s suite, Graham offers to finish her marketing reports so she’s not late to the office. Dina trots off.

In the Jabot elevator, Victoria confronts Phyllis about her plotting and scheming and demands to know her ultimate goal. As they spar verbally, mostly about Billy, Victoria wonders if Phyllis was part of a grand plan with Hochman.

Vikki’s ears ring as Phyllis rants that she’s paranoid. “I’m not the one in bed with Ben Hochman like you were.” Vikki warns her not to do whatever she’s planning next. Victoria heads to Brash & Sassy, where she admits to Billy that she confronted Phyllis in the elevator. She thanks him for his dedication, and goes on about how he’s matured into his full potential. Victoria expresses regret that she gave up on him and pulls him into a kiss. She apologizes afterward, and says she wouldn’t want to cause complications between him and Phyllis, but then steps away smiling to herself. At Jabot, Ashley stresses to Ravi about Jack resorting to underhanded tactics that could compromise their company. She has to get more information. Ravi wonders why she’s so concerned. Ash explains, “I grew up with the guy.” Dina appears and Ash drags her away to complain about her talking to Abby about Brent Davis – the family doesn’t need a bomb like this to go off. Dina apologizes. Awkwardness ensues when Ash asks for Dina’s marketing report.

Ravi reappears, and Dina promises not to let Ashley down. Later, Phyllis blows past Ravi and slams into Jack’s office demanding to know who told the Ice Princess she pushed Hochman toward her. Jack is taken aback. “Where is she getting her information?” When he touts competing fairly, Phyllis realizes Nikki got to him. She barks at him to handle this. Amused, Jack thinks it sounds like she wants Brash & Sassy to go under more than he does. Phyllis snaps, “Maybe I do.” In the corridor, Ashley joins Ravi, who has Dina’s laptop and noticed Graham sending her marketing reports. Ashley angrily wonders why she’s giving him access to confidential Jabot strategy!

In Alice’s house, she complains to Zach by phone about him sending girls to her house. She updates him on a run-in with nosy people from her past, and then sends him photos of the ‘premium girls’. He asks about ‘Rainbow Girl’, aka, Crystal. Alice remarks that she’s one of their most requested, but she’s been trouble. Zach calls the girl a moneymaker and signs off.

At Crimson Lights, Sharon tells Scott the ‘niece’ Alice’s neighbor referred to must be one of the prostitutes – her instincts were right; Alice is part of the sex ring. Scott feels there could be another explanation.

Sharon gets frustrated when Scott debates with her. After, Tessa shares a photo of Crystal with Sharon, who assures her she’s doing all she can to help. Tessa then chats with Abby and brings up Zach’s name. Abby reveals he passed her father’s interrogation. Inside, Scott has confirmed Sharon’s contention that Alice doesn’t have a niece and apologizes. Sharon remarks that Alice Johnson is not above mistreating a child; she neglected her daughter. Scott warns against gunning for Alice because she wants justice for Cassie. They debate about updating Paul. Scott’s against it for now. Sharon goes back to work, and Abby appears to snipe at Scott about doing ‘hard-hitting journalism’ with Sharon. Zach and Sharon both hear and wonder if there’s a problem. The situation is diffused. Sharon and Scott focus on Alice’s credit card, while on the patio, Zach questions Abby calling him her business partner – he thought they were more than that. Abby agrees they are, and they decide to be exclusive.

Hilary arrives at work to find Tessa there. They spar verbally before talk turns to Mariah. When Tessa defends Mariah’s relationship with Devon, Hilary wonders why she’s appointed herself Mariah’s guardian and protector. Mariah overhears. She joins them and more snarking ensues. Hilary reminds Tessa that Mariah grew up in a cult and can look after herself. After Hilary walks away, Mariah informs Tessa that Hilary wasn’t wrong about her and Devon. She fills her friend in on Devon ditching her for Hilary; he’s not over her.

Hilary says, “I am a free agent, but probably not for long.”

Devon tells Lily, “She just said she was happy we got a chance to reconnect.” Lily sighs, and says, “Here we go again.”

Phyllis hollers at Billy, “I don’t give a damn what Victoria thinks!” Billy retorts, “And I told her she was off base, but now I’m not so sure!”

Nikki sweetens Jack up before...