Billy and Victoria put the screws to Jesse, who tells all about Cane 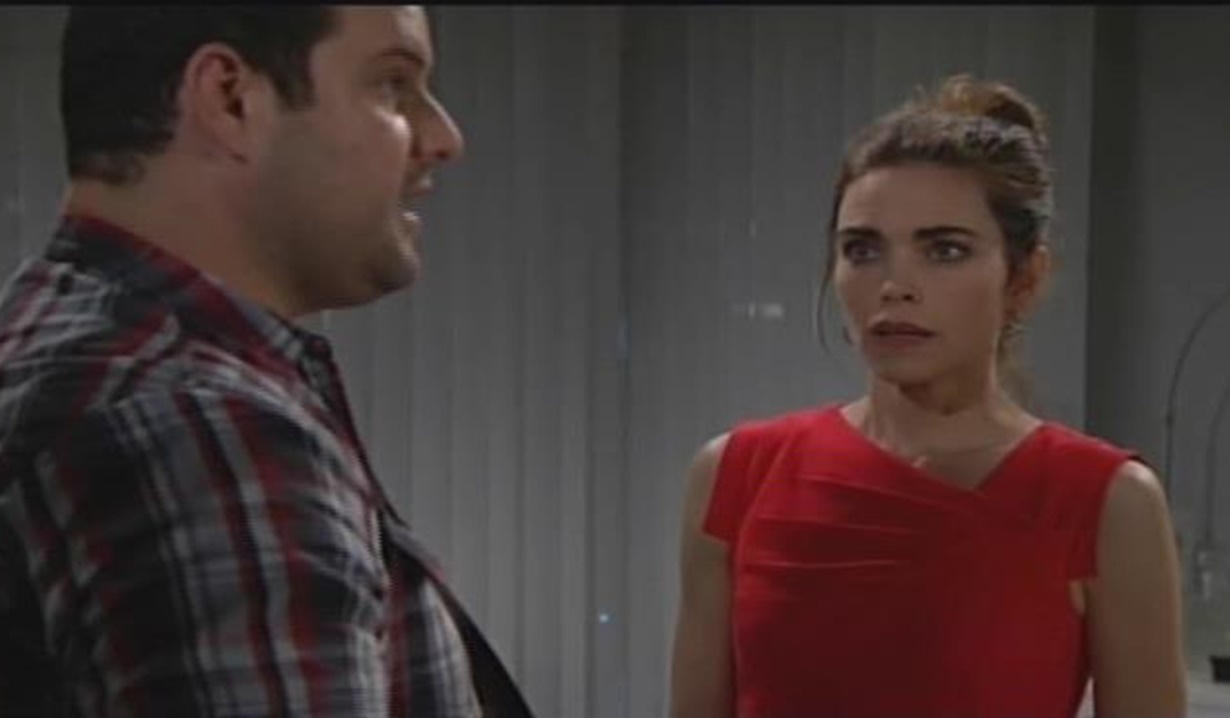 In her kitchen, Lily gets on the phone with the bank and learns the missing money was transferred out of their account. Cane arrives. Lily asks, “What have you done?” Cane says he used the money for an investment and husks about trying to prove he can provide for his family. Lily stresses about the school money. Cane will liquidate from the brokerage fund.

At the pool bar, Zack and Abby flirt after their kiss. Ashley arrives and Zack sucks up. Abby steps away and Ashley is impressed as Zack describes his app. He gushes about Abby until she returns. Nearby, Mattie informs Charlie she wants to see Reed perform tonight, but doesn’t want their parents to know. Charlie reluctantly agrees to keep mum. Back at Abby’s lounger, Ash tells her daughter she likes Zack and grills her on her feelings. Abby likes him, but is reluctant to open herself up again.

Sharon updates Scott about the latest call from Crystal in The Underground. Outside in the alley, Nick takes Crystal by the hand and leads her back to his club. Once inside, Nick finds Chelsea out by the bar and sends her into the office to talk to Crystal. In the office, Crystal rubs her arms and face. Chelsea enters and tries to be reassuring while fishing for information. Out by the bar, Reed arrives and Nick inquires about his mother’s health. Chelsea rejoins Nick to say the girl’s name is Crystal and takes food back to her. Sharon approaches Nick, who spars verbally with Scott about looking bad on GC Buzz. Scott drifts away when Sharon referees. Nick snarks that he’s an opportunist and warns his ex to be careful. Chelsea joins them and Sharon heads to the back after learning there’s a girl named Crystal in the office. Scott fills Nick and Chelsea in. In the office, Sharon explains who she is, and Crystal reveals that a woman who offered her a place to live made her sleep with men. Sharon vows to protect her.

At GC Buzz, Jordan is angry because Hilary knew the TV spot was a big deal for Lily, but went behind her back anyway. Hilary is offended when he refers to it as Lily’s commercial. Hil defends herself; she’s outraged that he’s not happy for her, but instead is accusing her of stealing Lily’s commercial. She thinks he cares about Lily more than he’s saying. Jordan sighs and says, “Maybe I do.” He insists he’s not secretly hoping Lily’s marriage will fail. Hilary informs him she’s not a damsel in distress, before kissing him.

Billy arrives in Victoria’s office with Jesse in tow. They give him the option to tell them about the deal he made with Cane, or the police. Victoria confirms she’ll pay twice what Cane paid for the right footage or information. Billy warns Jesse she is Victor Newman’s daughter and he sings like a bird, revealing that Cane had him edit the footage to make Billy look bad to the hockey league. They learn Cane paid him $25,000. Vikki pretends to cut a check for $50,000 as Jesse hands over the footage. She closes her checkbook and Billy orders the ‘blackmailing scum’ out. Victoria and Billy marvel over the revelation about Cane.

Mattie arrives at home seeking permission to hang out with friends tonight. Lily and Cane agree. Once alone with Cane, Lily opens up about how she’s been feeling. Victoria arrives with Billy. She’s glad Lily is there; she needs to hear this too. Billy informs Cane he saw him with Jesse and the three of them talked. He and Victoria reveal that Cane screwed them all over. “Including you, Lily,” Billy adds.

Reed notices Mattie arrive at The Underground and is surprised Charlie’s covering for her. Two other girls push in to talk to Reed, who shows Mattie to her table before playing live. After his song, Mattie steps aside as the other girls take selfies with Reed. Meanwhile, Sharon phones Paul about Crystal. She, Scott, Nick, and Chelsea go to talk to the girl, who’s disappeared.

As Scott listens, Sharon says, “You’ve got to help me find her, Paul. Tonight.”

Charlie asks, “You two know each other?” Reed says, “She’s the one who sued my mom.” Mattie adds, “And the one that dad got pregnant.” Juliet looks defiant.

Lily tells Cane, “I want you to leave this house tonight.” Cane replies, “You don’t mean that.” Lily orders him to pack his bags and get out.

Lily is shocked to discover a huge...

Lily throws Cane out of the house...