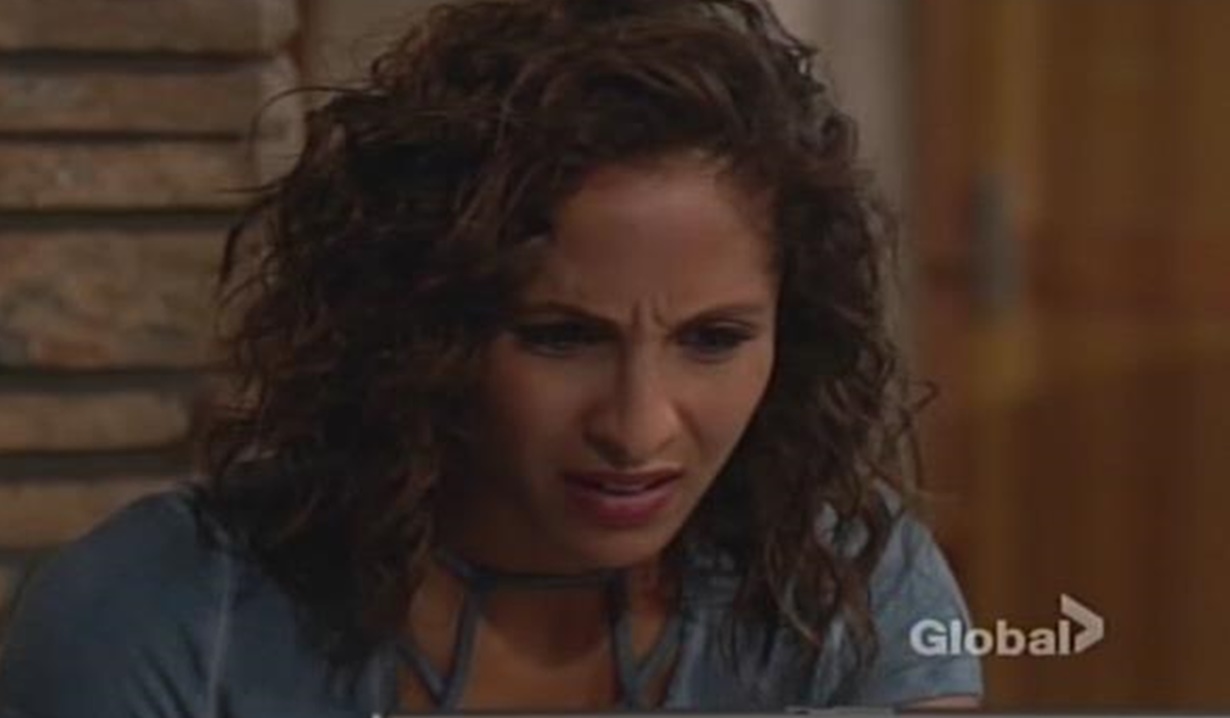 At home, Lily tells Cane she can’t pretend not to be hurt, but she also can’t walk away from her family. He assures her the worst is behind them. Lily gives him a pep talk about finding work, and they disagree about Victoria wanting to protect her company. Mattie enters to assurances that her parents are communicating positively. Lily goes for the laptop to email Neil her thanks for letting Mattie intern, but Cane lunges forward. “Don’t touch that!” Mattie and Lily buy his explanation that he’s running a virus scan.

On the coffeehouse patio, Billy wonders if Jesse got incentive from someone to stop taping when he did. Jesse wants to know ‘how much’ he cares. Billy adopts a threatening tone and warns he’d better start talking. Hilary appears, and Jesse snaps a photo of Billy as he’s talking to her.

In his kitchen, Cane’s phone bings – it’s a text from Jesse containing a photo of Billy and pressuring him to pay up. Sweating and agonizing, Cane completes the transfer of $25,000 from the twins’ college account to Jesse’s bank, leaving just $4000 and change for the teens. Later, Lily gets a call from Barry that she didn’t get the commercial. Mattie’s sympathetic and bets if the one she’d shot in L.A. had been aired it would have helped. They spot a note saying Cane went out. Mattie’s Walnut Grove Academy tuition is due so Lily assures her she’ll transfer the funds. When she gets on the laptop, she’s stunned to see the school account balance.

At Crimson Lights, Jesse receives the deposit and chuckles as he walks out on Billy.

At the pool bar, Zach puts lotion on Abby’s back as she beams. He impresses her with the streamlined app and confesses he wanted to see her. She’s slightly put out that he wants to talk business. He has a hot tech guy for her to interview and reveals the guy’s at the bar. Despite her swimsuit apparel, Abby meets him and strikes a deal. Zach hints that Abby’s a workaholic and she refers to her divorce, which still hurts. Zach hasn’t met the right person…yet. They kiss.

Chelsea joins Nick at The Underground. He’s working on expansion plans and insists it’s not about making a point to his dad, but to Noah. Chelsea’s proud and supportive. Talk turns to her business. She wants to reinvent the brand. Jordan appears with an idea. They sit, and Jordan suggests Chelsea strike a deal with Hilary to provide her on-air outfits and do a regular fashion spot. She loves it. Jordan will talk to Hilary. After, Nick reminds Chelsea he’s not a big fan of Hilary, but his girlfriend argues she’s nationally syndicated so it would be huge. Nick gets on board but doesn’t look thrilled when they hug.

At the station, Paul and Sharon discuss Crystal. Paul stresses they need more facts, and also warns Sharon about getting personally involved. Sharon can’t let this go. During her shift, Sharon gets a call from Crystal (played by Morgan Obenreder), who’s at a payphone. Paul hovers as the girl says she ran away and Sharon asks, “Where are you?” The girl isn’t sure exactly and cries if they find her, they’ll hurt her. Crystal hears people coming and takes off. Sharon is frustrated as Paul says she did everything she could.

In the alley outside The Underground, Nick finds Crystal hiding.

Billy shows up at GC Buzz asking to look at the hockey footage on Hilary’s server. Hil informs him she had to delete everything she had. Billy feels there could still be something on there. Hil agrees to get her guy to look in return for a favor down the line. The search is fruitless. Billy asks questions about how typical filming works and leaves, agitated. Jordan greets Hilary and broaches the exclusive deal with Chelsea. Hil is curious about their connection. She takes a call, and excitedly reports to Jordan that she got the commercial – the same one Lily auditioned for. Jordan asks if she’s really going to accept. Hil wants one good reason she shouldn’t.

On the coffeehouse patio, Cane angrily informs Jesse the 25k was a lifetime payment; they’re done. Billy arrives as Cane’s finishes roughing up Jesse and exits. Billy strides onto the patio and grabs the cameraman. “Jesse you’re a piece of garbage. You lied, and I’ve got the proof!”

Jesse says, “I’ve got nothing else to say to you.” Billy grabs him and advises, “You’d better start talking or I’m going to start making phone calls. It’s up to you.”

Lily asks Cane, “What have you done?”

Hilary says to Jordan, “Maybe you care about Lily more than you’re saying.” Jordan replies, “Maybe I do.”

Billy gets an offer from Jesse he...

Billy and Victoria put the screws to...