Y&R Day Ahead Recap: Victor punches Nick as a camera records it 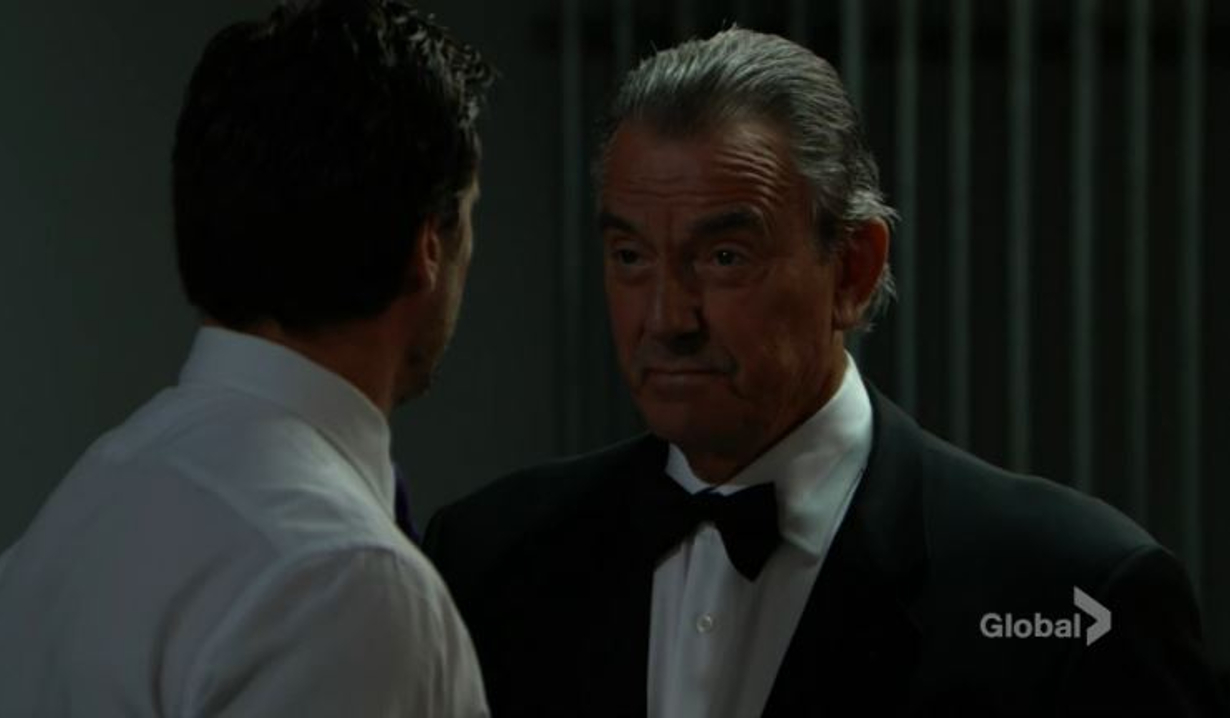 As everyone dances at the party, Scott tells Nikki how impressed he was by her performance. He walks off as she chats with Victoria, who is worried that Nick and Victor are nowhere to be seen. When she wanders off, Nikki starts looking around and Jack trails after her.

Victor confronts Nick in the Newman parking garage. Nick accuses him of manipulating Nikki and trying to get the family back in line. Victor denounces him for using Nikki to get back at him. When Nick calls him arrogant and heartless, Victor punches him. In the shadows, Hilary and Howard record all of this. As Nick yells back at Victor, Nikki shows up just as Victor lunges at his son again. Nick admits to his mom that he shorted out the soundboard. His mother says she doesn’t need saving. Nick tells his father how sick he makes him. Victor is tired of his self-righteousness and disowns him. His son jumps in a car and takes off. The mustache tells Nikki that tonight was a great success. He heads back to the party and she stays for some time alone. Jack finds her and she asks him to take her away.

Jack and Nikki are driving on the road. She doesn’t care where they go but he has an idea. He drives her out to the Abbott cabin. She kisses him. He kisses her back. Back at the party, Noah worries about his dad and leaves Tessa so he can find him. Ravi gets Dina on the dance floor. She’s impressed by his moves, but disturbed when Ashley tells her that Jack abruptly left. When Ash steps away for a second, Dina complains that it isn’t like ‘Graham’ to leave her like this. Meanwhile, Victoria rushes over to her father and he announces that Nick is out of his life. He crosses the room to Scott and thanks him for his loyalty. The mustache returns to his bickering daughters and Abby flounces off. She complains about her half-sister to Zach and then storms over to her to rant about her treating her like she’s six. When Victoria throws that back at her, Abby chucks a drink in her face. Victoria slips and hits her head. Her son helps her up and Abby apologizes. Meanwhile, Hilary and Howard discuss how juicy the footage is. She’s not sure they can use it. They bump into Mariah and the Winters men, who start quizzing them about what they’ve been up to. Hilary sends Howard back to the office and Mariah warns her not to cross Victor. After she walks off, Devon asks Mariah to go home with him. When Tessa comes by, Mariah invites her to stay at Sharon’s with her instead. After all the guests leave, Victor gets a call from the doctor, who tells him that Chloe escaped with Kevin. At Victoria’s, Billy says goodbye to the babysitter and then decides to get Phyllis acquainted with the kids. She worries about how Victoria will feel about that. He’s determined that they all spend time together and brings Johnny and Katie in. He introduces them but the kids aren’t very interested until she starts playing a video game. After some playing, he puts them to bed. Billy is impressed by how great Phyllis was with the kids. Victoria and Reed enter.

Ravi and Ashley drop Dina off at the Club. When she goes upstairs, Ravi tells Ash that Dina was referring to Jack as Graham.

Nick meets his son at Crimson Lights and admits the bruise on his face is from Victor. He apologizes for how he treated him earlier. In the other room, Abby and Zach arrive and chat with Scott and Sharon. Devon enters and sits alone at a table. Hilary joins him and warns him that Mariah may be suffering from insecurity. In the motel, Kevin tells Chloe that he’s building her a fake identity so she can start a new life in Oregon. He gives her the name Helen Jones. That’s not stopping her worries. He’s sure Victor and the doctor will be happy if they disappear. Before they can go, there’s something he has to do. After he exits, she sits with Bella and tells her how lucky they are to have Kevin. She’s determined to be a good person from now on. Later, Kevin returns with fake IDs and then asks her to marry him. They can’t make it official, but he vows to always keep her safe.

Mariah and Tessa get to Sharon’s and drink some wine. Mariah admits that she lied to Devon to avoid him because of how he’s been looking at Hilary. She’s sure he’s still hung up on her and she’s not okay with being the rebound girl. She cries about how much it hurts and Tessa holds her.

“I just want to make sure that you’re really okay with this,” Billy tells Victoria.

“Jack, I’m sorry. I shouldn’t have done that,” Nikki tells Jack as she pulls away.

“Who is it?” Kevin asks when there is a knock at the door. “Your worst nightmare,” Victor says.