Y&R Day Ahead Recap: Lily tells Cane he can’t be a deadbeat dad

Wednesday July 12, 2017: Nikki’s event hits a snag, Phyllis and Billy discuss the problems at work, and Kevin refuses to turn his back on Chloe. 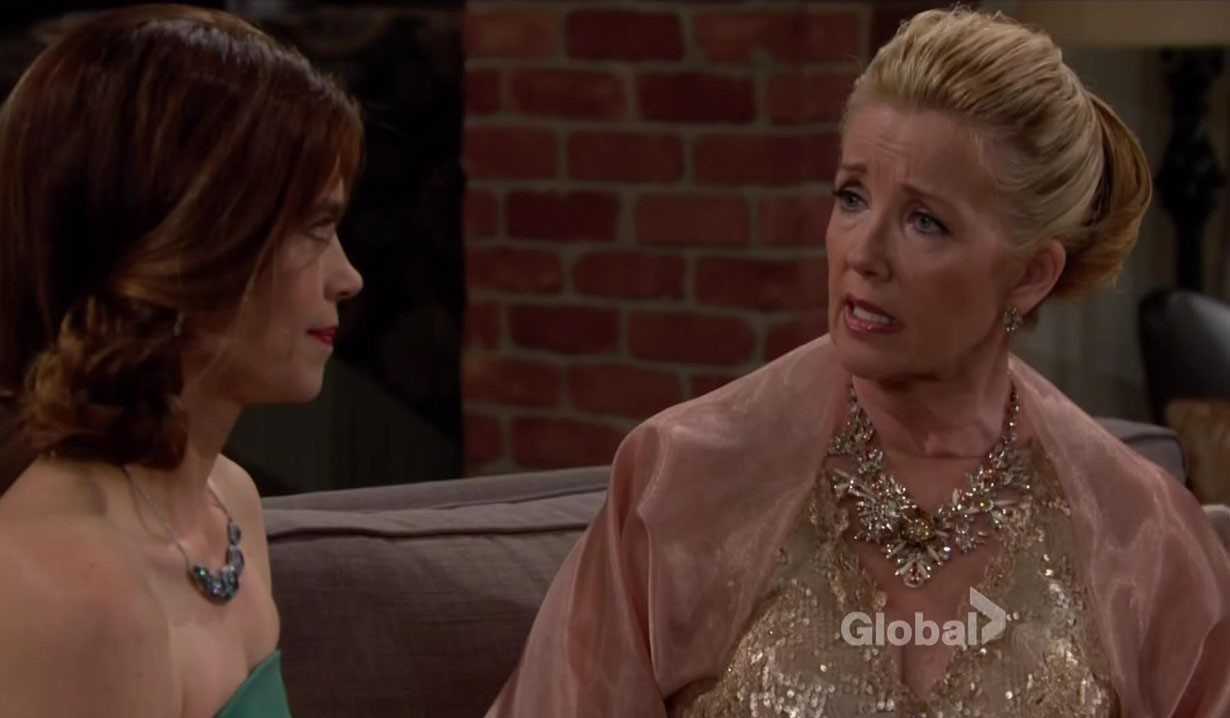 Nikki slowly makes her way down the stairs of the Newman ranch but must stop because of the pain in her hand. Victoria arrives. Victor pops up to say how stunning they look. He has a surprise for them. Hilary and her crew arrive and Victor announces that he wants the world to see what someone who suffers from MS can achieve. “What the hell is this?” Nikki asks, annoyed. She won’t back out of the interview though. Victoria corners Hilary, who is sure she wants to discuss the Juliet situation. The Newman apologizes for trying to put the blame of her during the court case. Hilary returns as the interview commences. Nikki discusses her condition and advances in research. Hilary keeps asking her about her relationship to Victor, who says they are a testament to true love. Then, Hilary brings Victoria into the interview and questions her about her parents’ relationship.

Chelsea stops by Nick’s and he admires how she looks. She’s worried about his mom’s condition. He assures her that the concert is not going to happen. He sabotaged the soundboard.

Abby is at the venue putting the final touches on things. Mr. Pittman is doing another safety inspection. When the sound board is tested, it starts sparking and smoking. Her tech starts working on it and Abby assures Pittman that it will be fixed. He’ll have to shut this down if they don’t fix it fast. She tries calling her dad but his phone is off. Flustered, Abby begs her tech to fix things. Nick and Chelsea show up and Abby vents. Soon, Victoria, Victoria and Nikki arrive. Nikki tells her son that she will perform, regardless of what he thinks. Meanwhile, Abby tells Victor about their problem. When Victoria wades in about Abby’s apparent incompetence, her sister blows up at her. Victor tracks down Pittman, who refuses to budge. The mustache walks over to his family and explains the concert has to be cancelled.

In a motel, Chloe and Kevin make a castle out of shampoo with the Bella. Kevin says he has everything he needs with them and puts the kid to bed. When he returns, Chloe worries that Dr. Harris is on their trail and will take Bella away. But she’s even more worried about Victor coming after them. She tells him that Victor arranged for her release and she was the mystery woman in the security video. Chloe wouldn’t blame him for walking out on her now that he knows this. He doesn’t blame her for what she did and he can’t help loving her. They kiss. After sex, he assures her that he’s not afraid of Victor and has the skills to beat him.

Lily returns home where Cane is moping. Juliet shows up with the test results. They confirm that he is the father of her baby. He apologizes to his wife. Juliet says she’s keeping the baby but doesn’t expect anything from Cane. The settlement will cover her expenses. After she leaves, Lily walks off and Cane weeps. Later, he looks for a legal document to take to Juliet. Lily lectures him for walking away from his responsibilities. He begs her to tell him what to do. She orders him to go and beg Juliet to let him be a father to the baby.

On the roof of the club, Phyllis relaxes with a cocktail while Billy worries about work. He tells her that Brash & Sassy has taken a hit and Victoria will need him at work more. They make out. When they get up, they spot Juliet and sit down to chat about the lawsuit. She tells them the paternity has been confirmed and she’s figuring things out. After she leaves, Billy lotions up Phyllis and they discuss Cane’s problems before jumping in the water. Down in the bar, Juliet bumps into Hilary and they discuss what happened with Cane. She’s afraid that Lily won’t let him abandon his child.

“Maybe the universe is trying to cut you a break and you won’t have to play through the pain after all,” Tessa tells Nikki.

“If you do not know how to fix the audio board then you are not needed back here!” Abby tells Victoria.

“How can I tell everyone that the show is going to go on, much less on time?” Nick asks. “Because it will,” Victor says.

Y&R Day Ahead Recap: Juliet gets the...

Y&R Day Ahead Recap: Abby gets some...