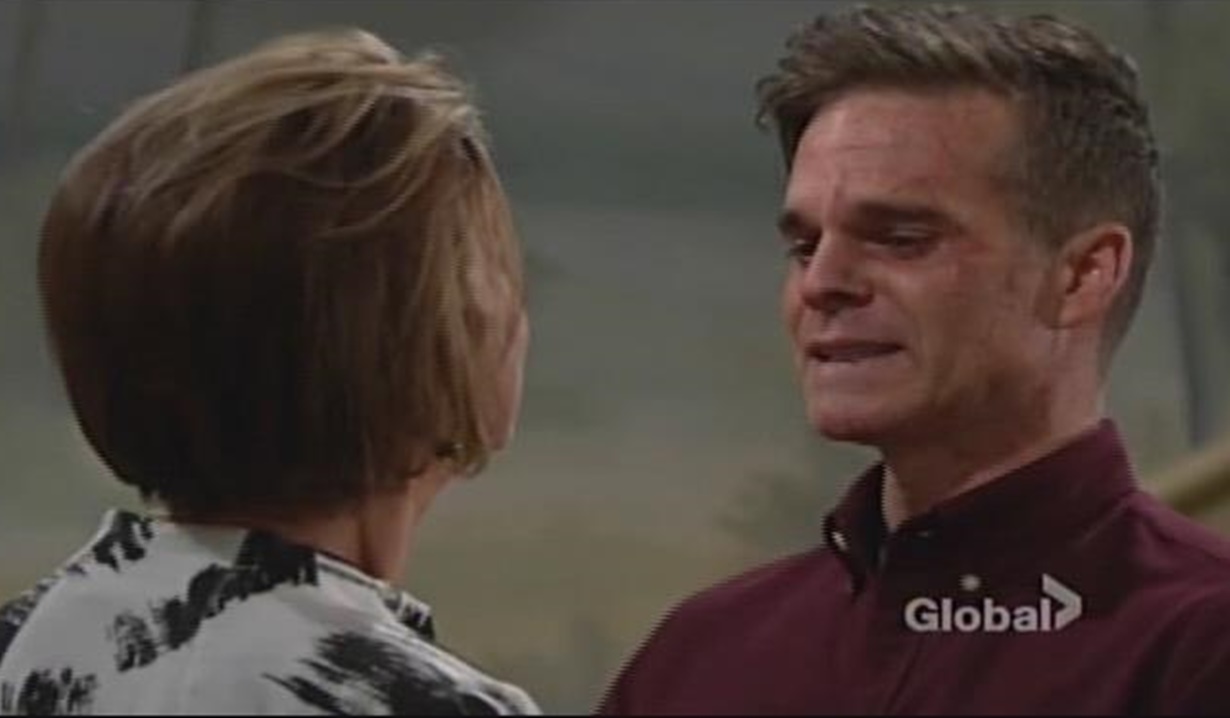 At the park café, Kevin sends Bella off, and Chelsea asks why she thinks Chloe is still alive. Kevin explains it’s what she says when they go to Chloe’s grave. Chelsea can relate – Connor sometimes talks to Adam. Kevin’s sorry. Chelsea suggests a playdate, but Kevin reveals they’re moving…today. Later, Paul arrives and Kevin says he’s leaving town. Paul wonders if he’s really thought about this, but is accepting. “I’m really going to miss you, Kevin.” They embrace.

In the tackhouse, Nick assures Faith by phone she doesn’t have to come home from camp for the concert. Chelsea arrives and relays that Kevin and Bella are moving. Nick is all for fresh starts. Talk turns to the concert and Nick confides that Nikki’s MS flared up, and he swore not to tell Victor. Chelsea urges him to trust his mom.

At the ranch, Nikki learns Victor commissioned a Chelsea 2.0 original for her to wear at the concert. Vic feels she deserves it for overcoming her MS to do the courageous performance. When he turns away she struggles to put on her necklace. She reminds Victor nothing has changed between them. He convinces her to don the gown, and then calls Chelsea to do an alteration. Talk turns to their family problems. Vic won’t give up. Later, Chelsea arrives and has to help Nikki unclasp her necklace.

Victor arrives at the tackhouse, where Nick angrily challenges him to see how miserable this concert is making Nikki and to cancel it. Vic claims he has no ulterior motives, and says Nikki would be devastated if he called it off. Nick snaps, “Better emotional pain than physical.”

At home, Lily disconnects from Neil as Cane comes in. She warns Mattie senses something is wrong. Cane is waiting on the paternity results and recalls going through this with Chloe. Lily hopes Juliet is lying. Cane reveals Victoria fired him. He mutters, “If only Victoria had fired Billy.” Lily angrily asks him to stop blaming others. Cane apologizes – he’s ashamed. Lily wonders what’s next. Cane assures her this won’t become public knowledge, but Lily argues it will if it’s his baby. She asks him to let her know when he figures out how she’s supposed to trust him again, and walks out. After, Mattie and Charlie enter, bickering, and Cane sits them down to tell them Victoria had to let him go. The twins are upset on his behalf, and try to make their dad feel better. He hugs them.

In Victoria’s office at Brash & Sassy, Billy is surprised to hear she fired Cane. He admits he thought she would keep him on, and agrees to give up weekends to pitch in. Later, Lily arrives, and spots Cane’s belongings in a box. Victoria is sorry it came to letting him go, but Cane left her no choice. Lily in turn, apologizes for him costing the company money. It’s established that Lily will continue as their ambassador, and she declines to take Cane’s belongings home. After, Billy and Vikki agree they respect how Lily’s handling things. Vikki reveals that Reed has a crush on their daughter. She looks at her laptop and exclaims over the company’s bad quarterly financials.

At the Chancellor estate, a panicking Esther ushers Gloria in and shares Kevin’s plan to move away with Bella. Gloria vows she’ll convince him to stay. When Kevin arrives, Esther and Bella are dispatched to the kitchen while Gloria confronts her son. He gives her the fresh start explanation and she barks, “Liar!” She knows change make him nuts. Kevin claims he’s stepping outside his comfort zone to find happiness. Once packed, Kevin and Bella say tearful farewells to Esther and Gloria. Outside, Kevin tells Bella they’ll finally be a family with mommy.

At the Club, Lily groans to Neil that she doesn’t know what she’ll do if Cane got Juliet pregnant. Neil hopes she’s prepared for some heavy decisions.

In the ranch living room, Victor stuns Nikki by acknowledging that he never asked her if she wanted to perform. He offers to cancel it if it’s too stressful, she just has to let him know. Nikki informs him she will do the concert for herself.

Chelsea returns to the tackhouse full of concern about Nikki’s pain. Nick decides that even if he angers his mother, he cannot let this concert happen.

Hilary asks, “What exactly would you like to talk to me about?” Victor replies, “The story that the audience would actually like to see.”

Nikki tells Jack she is more than ready for the performance and says, “You are going to be there to see it.”

Jill says to Cane, “I don’t know how your family’s ever going to recover from this.”

Y&R Day Ahead Recap: Juliet gets the...