Y&R Day Ahead Recap: Cane gets shifty advice from Colin 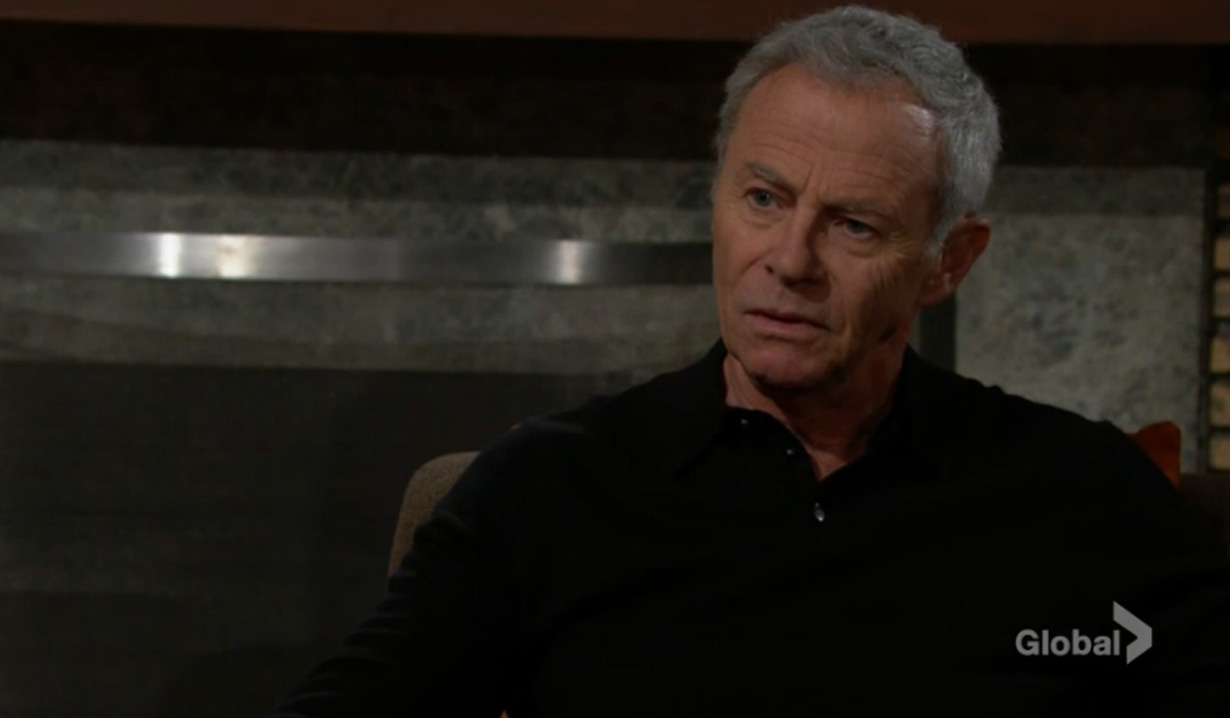 Jill, back for her three-month check up, surprises Billy in the Jabot parking lot and asks about Victoria. Phyllis emerges from Billy’s car. Jill wonders if he picked her up in the gutter. They start kissing and Jill grimaces. Billy updates his mother that they’re living together – Victoria is fine with it and he hopes she will be too.

At the Club, Victoria takes a call from her father about Nikki being gone. In the dining room, Jack complains to Neil about Victor’s concert plans making Nikki sick. Talk turns to Dina, and Jack asks for Neil’s help to prove that Graham’s after his mother’s money. Neil hasn’t picked up on any dirt regarding Graham – he’s actually been an excellent resource. Jack insists he can’t be trusted.

More: Which soaps air on the Fourth of July holiday

Nick and Chelsea exchange good morning kisses at the penthouse. Their make-out session is interrupted when Victoria calls to meet with Nick. Chelsea leaves for a business meeting as Vikki arrives. She announces that Nikki’s taken off to God knows where and Victor’s concerned. Nick couldn’t care less about Vic’s feelings and grouses about the pressure he’s been putting on Nikki. Vikki is stressed and reveals she just found out Cane’s been lying about the lawsuit. She still refuses to pay a settlement, however.

At the park, Jordan snaps photos of Lily, who’s not into it. She thinks everyone is judging her for sticking by Cane. Jordan reassures her. They go back to the shoot. Once updated, Colin presses Cane to share the actual truth about Juliet’s claims. Cane tells him what happened in the hotel room and how it led to the sexual harassment lawsuit after Juliet was fired. He started a chain reaction and it’s all his fault. He reveals his part in setting Billy up – now he deserves everything that’s happening to him. Colin assures him he made mistakes but is a good guy. He advises Cane to stick to his story since Lily and Victoria already bought it.

Chelsea runs into Phyllis at Jabot. They dish about Nick and Billy, and Phyllis offers to listen to Chelsea’s pitch since Lauren’s unavailable. They are discussing branding and Fenmore’s when Jack appears and asks to hear the pitch too. After Chelsea shares her ideas, Jack says he’ll be in touch, and Phyllis counters that Lauren will be calling as well. Chelsea goes, and Phyllis accuses Jack of being controlling. He shows her out and then leaves a message for Nikki. Nick shows up and says Nikki’s missing. Jack reveals she was stressed when he saw her, and they discuss the pressure of the concert.

At Brash & Sassy, Jill rants to Billy that she expected to come back to a wedding announcement. Billy quips that Phyllis hasn’t popped the question, before explaining why he and Victoria ended. Vikki enters. Jill asks why everyone’s acting like they’re at a funeral. They fill her in on the lawsuit against Cane. Jill scoffs that Cane is the last man around there who would sexually harass a woman. Billy snaps, “Thanks for that!” He thinks Cane is a lot like conman Colin. Later, Jill opines to Victoria that Juliet’s lawsuit is a cash grab, and advises her to settle. Victoria argues, but Jill says he was a drunk married man away on business and a jury won’t believe him. Victoria asserts that she won’t back down and make her company look weak. Jill grins – she sounds like Victor. Later, Vikki leaves Nikki a message as Cane appears. He wants to regain trust, but Victoria won’t be letting him make any important moves for now. Billy enters and suggests he prove he’s a good husband to Lily. He has no doubt Cane had sex with Juliet and warns any damage she does is on him.

Jill pops up to Jabot and gets into it with Phyllis about her history of cheating. Phyllis reminds her she cheated on John with Jack. Jill admits she used to be Phyllis, but she has changed and Phyllis has not. She warns Billy will go back to Victoria. “You simply can’t compete.” Phyllis accuses her of being controlling and not caring what Billy wants.

Lily and Jordan are at the Club bar when Juliet appears – she wants to tell Lily the truth. She never wanted to hurt Lily and claims it’s not just about the money. Lily throws cash at her and Juliet faints.

Chelsea wonders if Jordan thinks Juliet is faking an illness.

Billy complains to Victoria that she blows off his advice.

Gloria asks Jack, “Why are you so interested?” Jack replies, “Simple. I may want to hire her.”