Y&R Day Ahead Recap: Dina signs her will, reveals a deal with Graham 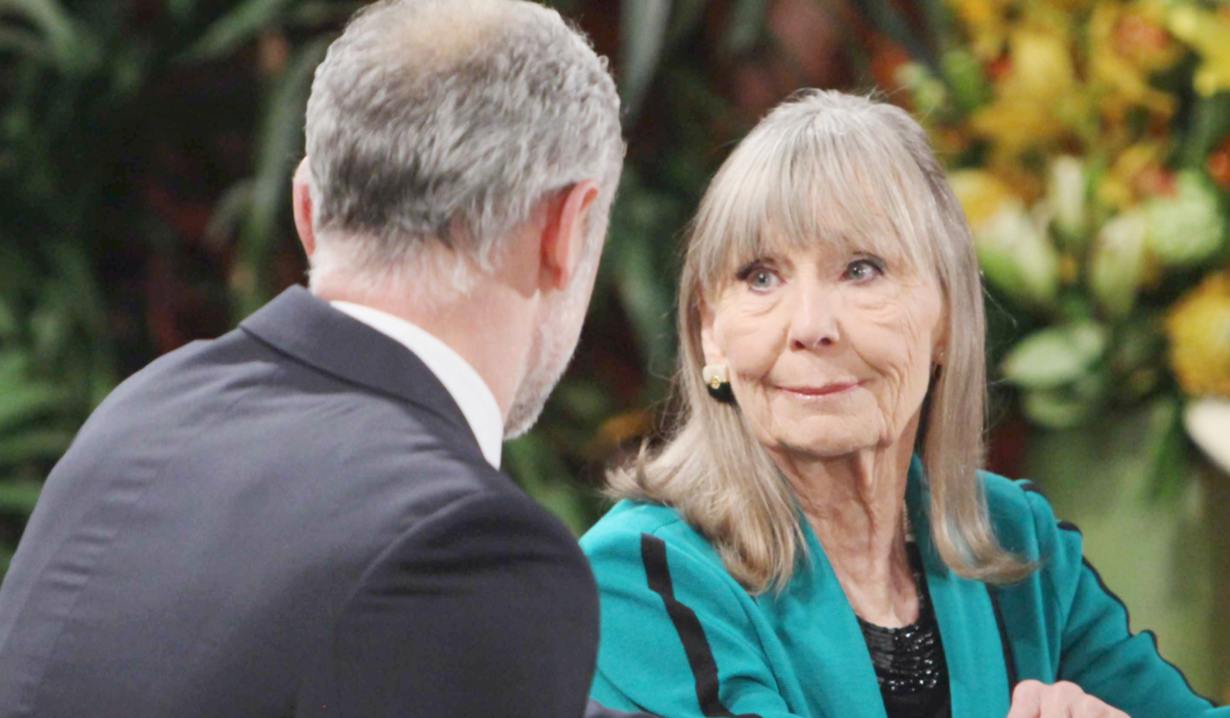 Sharon smiles as she watches a shirtless Scott scroll through his laptop in her living room. They make out on the sofa. He feels lucky about his job and his relationship. As they laugh and kiss, Scott receives a message from Victor, and talk turns to Sharon’s proximity to her former in-laws. Scott hopes not to destroy the goodwill by revealing he’s spending nights there.

In Dina’s suite, she tells Graham that her lawyer is sending the merger paperwork. Graham asks about the other matter – her will. Talk turns to Jack’s hostility. Dina croons that he just doesn’t understand. Graham warns her against moving in with her children, who are not invested in her well-being as he is. Dina announces if Graham prints the will, she’ll sign it. In the Club spa, Nikki looks at her shaking hands, enters the sauna, and flashes to Victor’s voice saying she’s nothing without him. Gloria arrives, and they discuss their respective relationships with Jack. Glo reveals he asked her to hit on his mother’s companion. Nikki laughs, but they agree Jack may want something that Dina can’t give him.

At Jabot, Ashley overhears Jack leave a message for Nikki to call him, and snaps, “She does have a husband you know.” Jack grouses about Victor forcing Nikki into the concert without any thought to the stress it’s causing her. He feels she’s on the brink of taking a drink. The topic turns to Graham, and Ashley is stunned to hear what Jack asked of Gloria – he’s just as oblivious to other people’s feelings as Victor. Jack gets defensive and hollers he won’t let the Mustache take advantage of Nikki. Ash reveals that Victor shared their concerns about Graham, and that Ravi discovered he was a fledgling actor. Jack is taken aback when Ash suggests backing off the man, saying it’s Dina’s life. Jack protests, but Ashley makes her point.

Nikki exits the Club sauna, as Glo watches her shaky progress. Outside, Nikki calls Jack and says she needs him.

Nick enters the ranch and calls out, “Mom?” Victor appears and taunts that he can’t avoid him forever. Nick rehashes what keeping his secret has done to the family. Victor argues his son should help him end hostilities for his mother’s sake. They bicker as Nick accuses Vic of pressuring Nikki to play at the fundraiser. Vic insists when she hears the applause, she’ll realize he’s the only one who can give her what she needs. He puts Nick on notice about continuing to openly despise him. Vic learns Faith went to camp for a month, and the arguing about Adam resumes as Scott arrives. As Vic and Scott start working, Nick exits and lingers outside. Vic admits to Scott that his relationship with his son isn’t great right now and then leaves to check on the venue.

Nick arrives at Sharon’s place and complains about his father trying to control everything. They discuss Nikki’s determination to go through with the concert. Sharon admits she was worried about living up to Victor’s expectations. Just then, Scott enters. Nick grills him about Victor’s intentions with the concert and watches, smirking, as he kisses Sharon goodbye. After, Nick opines that his father is using Scott. Sharon disagrees, and asks why none of the Newman children or Nikki wants anything to do with Victor.

Ashley arrives at the Club as Dina finishes signing the papers, surprising Graham as Dina didn’t tell him she called her. Graham exits, and Ashley notes his jovial mood. She mentions Jack’s idea for Dina to move in and they discuss what they missed out on in their mother/daughter relationship. When the subject returns to Graham, Dina assures her of his loyalty. Ash wonders what if he meets someone and leaves her. Dina says he won’t – they have a deal. Down in the sauna, Graham encounters Gloria, who makes more steam.

At the park café, Nikki confides to Jack that she’s terrified about the concert and assures him she got steroids for the pain and swelling. Jack urges her to postpone. Victor may not see it, or care, but he does. Nikki insists she will go through with it so Victor can’t take her confidence away again, but grimaces in pain. Jack hugs her and she leaves. Victor appears and asks what the hell Jack thinks he’s doing with his wife!

Mariah grabs Tessa’s pen and says, “Are you sure you want to sign your life away to this guy?” Tessa and Devon gape at her in surprise.

Nick says to Chelsea, “There’s something that I need to tell you. I’m just worried that it might change the way you feel about us.”

Cane tells Hilary, “I’m warning you to stay out of this, because I will not let you destroy Lily or my family.”