Y&R Day Ahead Recap: Lily faces a huge decision regarding her marriage 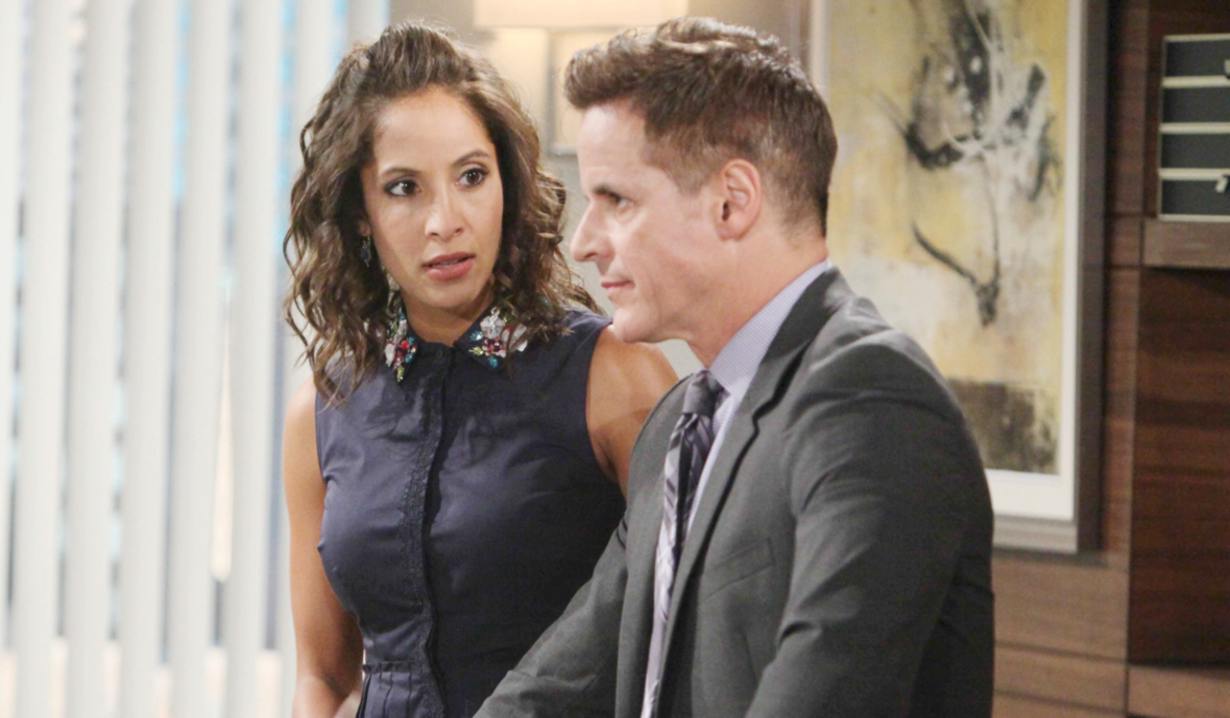 More: Soap pre-empts for the Fourth of July holiday

At the park café, Nick is surprised to hear that Cane, not Billy, was named in the sexual harassment suit. Phyllis chastises him and remarks that whether or not Cane is guilty, it’s affecting everyone around him. She wants it to wrap up so they can all move on. Nick thinks she’s insecure, but she denies it and advises him to take care of his own relationship.

In Michael’s office, Cane admits Juliet spent the night in his room. Leslie proposes a settlement again, while Lily runs out with Cane on her heels. Lily demands he tell her exactly what happened in his hotel room. As she rants Cane protests that he passed out and woke up alone. He admits he would never have told her anything had Leslie not shown the footage. Meanwhile, Leslie informs Juliet it could go either way and encourages her to go wait at the hotel. Meanwhile, Billy complains to Victoria and Michael about continuing to defend Cane – he lied and they’ve no idea what the next bombshell is going to be. Michael agrees with Vikki that the footage doesn’t prove coercion. Billy maintains it proves Cane’s incapable of telling the truth. Vikki will call Michael when she makes a decision.

Jordan arrives at Chelsea’s and she asks what’s going on with him. Jordan updates her on the lawsuit and Hilary’s role in it. He complains about her desire to trash Lily and Cane. Chelsea notes he’s protective of Lily. Jordan insists that Lily is just a friend and his only mixed feelings are about Hilary. He thought they had a shot long-term. Chelsea advises him to decide if it’s worth fighting for. Nick arrives and introductions are made before Jordan goes. Chelsea comes clean that she and Jordan go way back. She was a con, and he was a photographer who took the kind of photos you don’t put on your resume. Nick needs more details. Chelsea laughs that he didn’t take pictures of her, and they weren’t romantically involved. Talk turns to their businesses, before Nick gives her flowers, a donut t-shirt and tickets to the water park. They kiss.

At home, Cane remarks on Lily’s ongoing silence. Lily says he deceived her and those who defended him. Cane insists he didn’t betray her, though he’s ashamed. Lily is wondering how much of Juliet’s story is true. Cane wouldn’t throw away what they have for some stranger. Lily reminds him she admitted it when she cheated. Cane repeats that it’s a lie he coerced Juliet into having sex. He wants her assurance they’ll get through this, but is summoned by Victoria and leaves. Lily cries. Later, Jordan arrives and Lily reveals things have gotten worse. She fills him in and remarks that she really wants to believe her husband. Jordan asks, “Does that mean you don’t?” If she were his wife, there would be no doubting. Pissed off, Jordan asks if she will stand by her husband or has she had enough?

In Jack’s office, he complains to Dina about Graham insinuating himself into her life and says he’ll be expecting something in return. Dina isn’t naïve and characterizes what she has with Graham as an arrangement. She goes on to say Graham was there for her when she was alone and she trusts him. Jack continues to argue with her. She wonders if this is about the inheritance. Jack insists he cares – she’s the only mother he has. Graham arrives. He and Jack spar verbally about the need for Dina to sign more paperwork. Once alone, Jack grimaces and calls someone for an urgent meeting.

Billy meets Phyllis at the park and they rehash the evidence against Cane. Billy says Victoria has her battle gear on and is meeting with Cane. He thanks Phyllis for putting up with the drama and reiterates she’s the only woman in his life. They continue to speculate about the lawsuit. Billy thinks the pain is just beginning for Lily and Cane.

At Brash & Sassy, Victoria lays into Cane about lying. Cane insists he didn’t force Juliet to have sex with him to get a job. Victoria doesn’t care if he had sex with Juliet or not but wants him to swear he’s innocent of her claim. Cane points out that she never had an issue prior to being fired. Victoria agrees. She’ll fight this all the way. At the Club, Graham and Dina bicker about Jack’s concern. Graham reminds her he made a commitment to her that her children would never make.

Jack turns up in Michael’s office, and spouts off about Graham. He’d like Michael to help him get control of Dina’s finances or contact her attorney. Michael’s hands are tied, and he advises Jack to be careful as love and money are involved.

Dina tells Graham, “Print those documents for me to sign, will you? I should have signed it before we left Europe.”

Jack tells Nikki, “I know what this is doing to you. Victor may not see it, or care, but I do.”