Y&R Day Ahead Recap: Cane is forced to tell Lily about Juliet’s claims

Wednesday June 7, 2017: Victoria grills Cane about his trip to Tokyo, Kevin makes an announcement, and Hilary has a juicy story for Mariah. 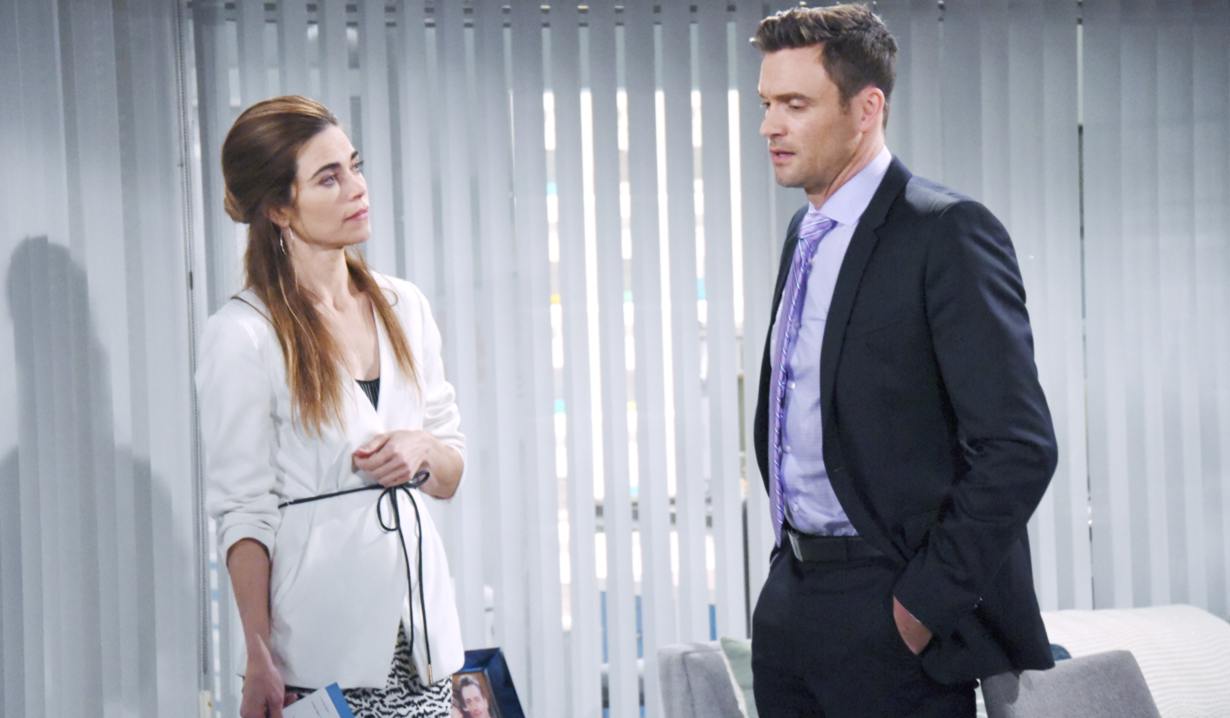 In the church, Chloe tells Kevin to wake up. He stands, shaking, and asks what’s going on. Chloe assures him she’ll explain, and hands him a slip of paper with a location to meet her. She hops back into the coffin as the men come to take it. After Kevin leaves, Dr. Harris appears, says he’s from the moratorium, and takes over. Once the men leave, Chloe gets out and rants about the trippy experience. She adds that Victor was right – faking her death was the only way to get people to stop searching for her. Harris reveals he plans to take her back to Louisiana.

At Crimson Lights, Juliet tells Billy that Cane is the man named in her lawsuit, and suggests he should be on her side since Cane has been hoping to have him fired. Billy can’t believe he’s guilty of sexual harassment. Juliet won’t give any more information.

More: News for Y&R and all four soaps

In Victoria’s office at Brash & Sassy, Cane denies the sexual harassment claim, as he panics. Vikki wants him to swear it didn’t happen, and asks for a detailed account of his trip to Tokyo. Cane obliges and gets to the part where they drank when Reed interrupts. Cane exits and hollers at Reed for leaving his guitar case in the way. Later, Billy arrives and Victoria learns Reed is interested in a mystery girl. While Reed uses her laptop, Victoria and Billy debate whether to believe Cane or Juliet’s version of events. In the lab, Reed sprays on cologne before leaving. Meanwhile, Victoria assures Billy she won’t pay for Juliet’s silence.

In Michael and Lauren’s apartment, Gloria is concerned about Kevin’s absence. Michael reminds her he was saying a private goodbye to Chloe. Glo hollers that the woman is dead – how long can it take? She wants to go back to the church, but stays when Lauren and Sharon fail to support her. Sharon takes Paul aside to ask about Dylan and report their divorce is final. Paul feels they have to move on. Sharon shoots a significant look at Scott that causes Lauren to plant her hands on her hips. Mariah arrives looking for Kevin, who arrives soon after. Glo notes he’s white as a sheet. Kevin thanks them for their support and then zones out before announcing he’ll be taking some time off work to go away…to Tahiti. Mariah asks about the service, and Kevin admits he almost hit Nick Newman. They joke about being friends and not making it as a couple. Lauren approaches and Kevin tells her how lucky Michael is to have found her. Paul urges Kevin not to stay away too long. Kevin says his faith in him changed his life. Scott next thanks Kevin for rescuing him and wishes him well on his trip. Scott is puzzled when Kevin claims he’s not taking Bella as it’s too risky.

More: Hallmark teaser for The Wedding March 2 airing in June

Hilary spots Juliet with a suitcase at the Club. She says Leslie advised her to lay low. Hil beams that she’s a shark and it’s good advice. Later, Cane arrives, smacks Hilary’s phone down and confronts her about Juliet. “This has your fingerprints all over it.” Hilary plays dumb. She taunts that whatever he did to Juliet it’s bound to disgust Lily. Cane warns her to keep quiet or she’ll regret it. Hilary calls Mariah to get her butt over there.

Mariah leaves Michael’s place, and Gloria pulls Kevin away from Scott. She admires Kevin’s parenting and Kevin acknowledges she’s been there for him. Kevin and Michael leave for a walk. Sharon offers Lauren help, but the redhead grills her about dating Scott. Lauren brings up Sharon’s numerous marriages and attempt to raise Sage’s child as her own. Scott appears and breaks the tension, and Glo, who overheard, warns Lauren she’ll push her son into Sharon’s arms.

More: Teasers for all four soaps

At the park, Michael tells Kevin he hopes he finds peace. They laugh and cringe over their mother ‘getting busy’ with Jack Abbott and Kevin says Mike is the best brother and friend a guy could ask for. Michael assures Kevin he’ll look after Bella and that he’ll get through this. Kevin decides to leave from there and tells Michael he loves him.

Mariah joins Hilary at the Club and learns she has a juicy sexual harassment story – a major lawsuit is being filed against Brash & Sassy.

At home, Lily fishes unsuccessfully for information on Mattie’s love interest. Mattie divulges that he’s a musician. Mattie leaves the room to text a friend when Cane arrives. He tells Lily there’s something she needs to know. Mattie reappears and leaves for The Underground. Lily asks Cane what’s going on. Cane reveals that Juliet has filed a lawsuit claiming she was coerced into having sex with an employee. “And she’s naming me.” Lily’s eyes widen…

Jordan says to Hilary, “I think she got some bad advice from someone claiming to be in her corner.”

Lily says to Cane, “Is there any way…that what Juliet’s talking about, that something might have happened in Tokyo?”

Michael says, “I take it you’re not inclined to settle; make this go away.” Victoria replies, “Absolutely not.”