Tuesday June 6, 2017: Kevin gets the shock of his life, Hilary gives Juliet a pep talk, and Reed asks Mattie out. 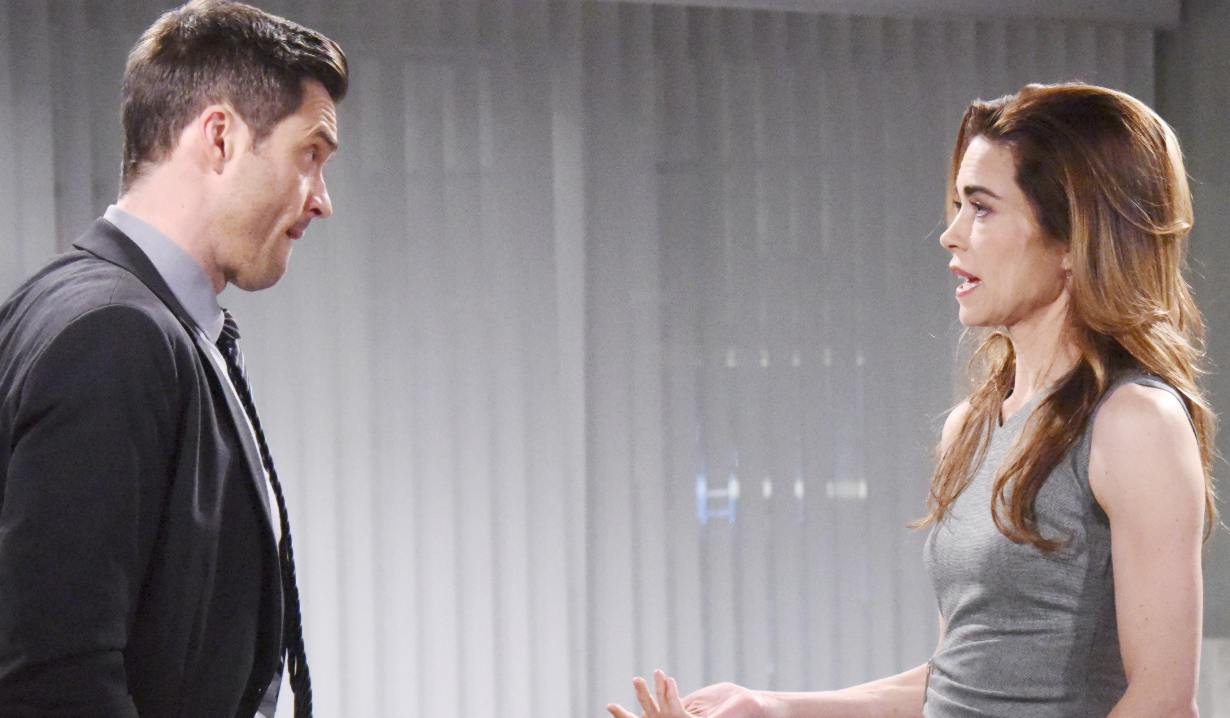 At Chloe’s funeral, Kevin loses his mind at the sight of Nick and accuses him of being the reason she killed herself. As Michael holds him back, he turns his attention to Chelsea and adds, “Both of you! You did this together!” Father Todd intervenes to remind them why they’re there, and to point out they’re scaring Bella. Nick and Chelsea express their condolences and leave. Paul arrives and Kevin declares it’s time to say goodbye. Todd continues the service and Kevin gets up to speak. His talk surrounds letting people know the truth about who Chloe was and that he loved her. Kevin cries that she’s with Delia now, and he promises to take care of Bella. Gloria and Lauren prompt Michael to help Kevin to his seat.

More: The Perfect Bride teaser for this weekend on Hallmark

On the patio at Crimson Lights, Hilary reassures Juliet about filing the lawsuit. Juliet thanks Hil for asking Leslie to take her case. Hil urges her to stay strong and Juliet acknowledges she’s been her only real support. They go over Cane’s behavior. Hilary believes Juliet has a strong, and explosive, case. The brunette’s not so sure Cane fits the profile, and worries what this will do to Lily. Hilary thinks she’s shown more concern for Lily than her husband did, and reiterates that Cane used Juliet. She presses Juliet not to let anyone intimidate her. Inside, Chelsea wonders if Nick’s angry that she made him go with her, but he reassures her. They talk about getting the boys together.

At Brash & Sassy, Lily kisses Cane goodbye in the lab, as Victoria rants to Billy that they will fight the lawsuit in the office. They marvel at this turn of events and wonder if there’s something to her allegations. Victoria tells Billy it’s not about him, and then takes a call from Lily’s agent who wants to loosen her contract. Victoria calls Cane and Lily in. Lily is surprised to hear of her agent’s demands and Cane backs her up. Lily exits, as Vikki asks to go over something with Cane. Once alone, she informs him Juliet is suing them. Cane advises Vikki do whatever it takes to make it go away, which surprises her. She reveals that the lawsuit isn’t for wrongful termination; it’s for sexual harassment. “And she’s naming you, Cane.”

Mattie listens as Reed strums his guitar at the park café. She pays him a compliment and they joke and chat. He invites her to come and watch him at the open mic night. Mattie thanks him but has to go do homework. Billy arrives and Reed tries to give him the brush off, but Billy feels they can talk about anything. He brings up Zoey, and Reed admits he’s got his eye on someone else. They talk, and Billy mentions that Victoria’s got her hands full at work, before they get back to laughing about the mysteries of the female mind.

More: News for Y&R and the other three soaps

At home, Lily is taken aback when Mattie mentions going to The Underground and asks if a boy is meeting her. Mattie just wants to ‘hang’. Lily tells her to have fun, but later pries again about whether there’s a boy. Mattie admits she’s met someone who doesn’t go to her school. They discuss whether Mattie’s intelligence is appealing or not.

Billy finds Juliet at the coffeehouse and asks if she’s making up the sexual harassment claim. She refuses to discuss it, but reveals the claim isn’t about Billy.

In the park, Chelsea and Nick, with their boys, talk about planning an outing as a foursome. Nick thinks of Chloe’s funeral and wonders if it’s over. They decide to get tickets to the outdoor concert, and reflect on feeling like a family.

At the church, Kevin helps Bella say goodbye to Chloe’s photo as the others look on. Once everyone has gone, Kevin approaches the casket and apologizes to Chloe for letting her down – she deserved better. Suddenly, the lid of the casket is pushed open from inside. Kevin faints.

Michael tells Gloria, “He wanted to say a private goodbye to Chloe.” Exasperated, Gloria hollers, “The woman is dead! How long could that possibly take?”

Juliet says to Billy, “If you’re smart, you’ll be on my side, because ever since my first day on the job Cane’s been hoping to get you fired.”

Cane tells Lily, “There’s something you need to know.”