Monday May 29, 2017: Chloe frets about being found, Phyllis has a back-up plan for Billy, and Cane calls Billy out. 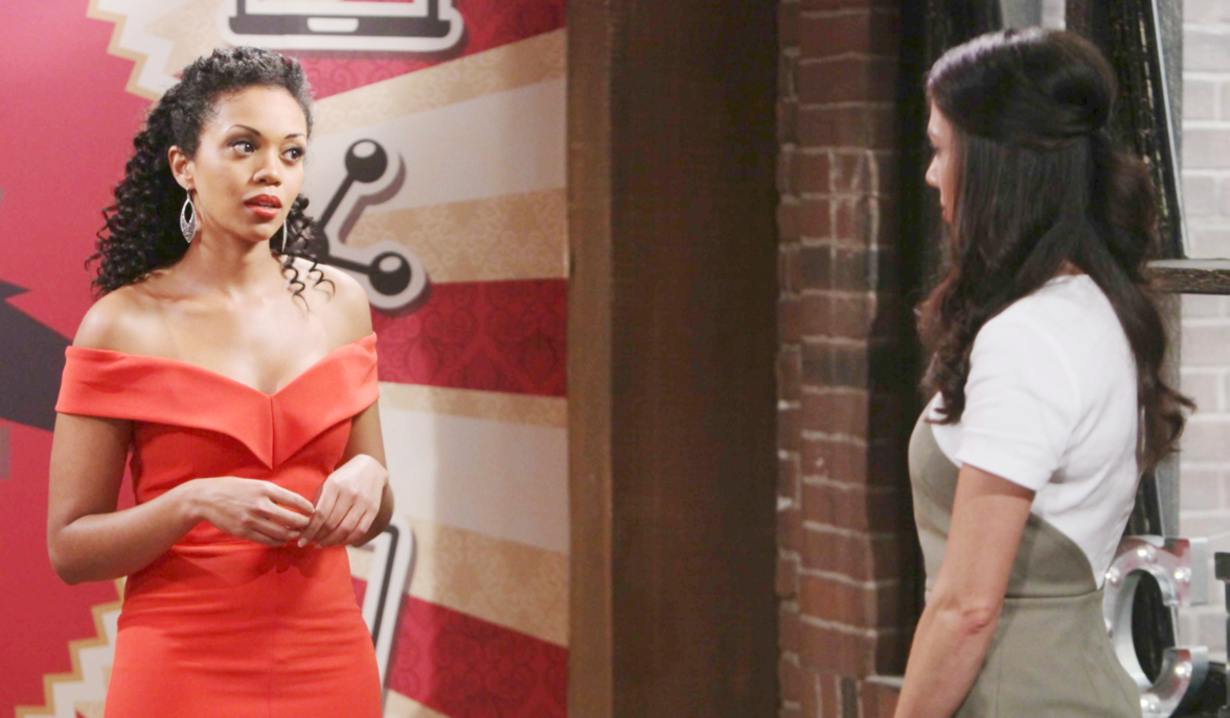 At Newman, Scott listens as Victor speaks to Dr. Harris on the phone about Chloe. After, Scott admits what he heard. Victor claims he’s searching for Chloe to give his family closure. Scott thinks she’ll eventually slip up, and mentions suggesting psychiatric facilities to Chelsea. Vic is sure that will be a dead end. Scott produces the requested concert list and complains about performing menial tasks. Vic dismisses him. In the corridor, Abby grills Scott about his meetings with her father. He says not everything revolves around her. In his office, Victor flashes to relocating Chloe to Dr. Harris’ house, where she was injected with drugs and placed under 24-hour surveillance. Abby enters and presumes he’s thinking about Adam. Victor ruminates about his children lying to him and going behind his back. Abby smiles uncomfortably.

In Dr. Harris’ house, Chloe panics about the man and woman who were there asking about her – she doesn’t want to go to prison. Harris soothes that they’re gone now. Out in the car, Chelsea tells Nick the doctor was holding back. They decide to go back in. Harris sees them through the peephole and hides Chloe before letting them inside. Chelsea tells Harris she won’t leave until she sees Chloe’s visitor records from the facility. Harris claims Chloe had no visitors. As Nick and Chelsea prepare to leave, she spots a sketchpad. In the car, she tells Nick what she saw makes her believe Harris knows where Chloe is. Inside, Harris reports to Victor by phone and Chloe overhears him say, “I’ll take care of her.”

Cane arrives at Brash & Sassy and is stunned to hear that Victoria fired Juliet and not Billy. Cane accuses her of never having had any intention of firing her ex. Vikki defends her decision, but Cane argues Billy’s a problem and Juliet’s paying the price for his mistake. Vikki ends the conversation.

At the park, Phyllis tells Billy she knows he was joking on the footage; she ‘gets’ his humor. She assures him that if he’s done at Brash & Sassy he’ll go on to bigger and better things and proposes he could join the Fenmore’s team; Jack would have to suck it up. They recall working together at Restless Style didn’t end well but acknowledge they’re different people now. Billy wanted to prove himself to Jill at Brash & Sassy. Phyllis assures him he did. Billy feels lucky to have her. Later, Scott is there when Abby passes by with a shopping bag. She defends her need for retail therapy at length and warns him not to look down on her. After a rant about making the most of her opportunities at Newman, unlike him, she storms off as he calls, “Have a nice day!”

Lily arrives at GC Buzz, where Hilary tells her not to blame her, and is surprised she’s not furious. Lily laments that her commercial won’t air and wonders what Hil is talking about. Hilary says, “The flashdrive.” Lily reveals Cane crushed it before she saw anything and presumes that Hilary’s reaction means she’s jealous. They bicker. Lily asks Hil to delete the footage from the Hollywood show for Cane and follows her to her laptop. After a phone call about headshots, Hilary offers to prove the footage is gone by showing Lily her video files. Her mouse hovers over ‘Juliet and her Romeo’, when she’s interrupted by an issue with a canceled guest. Lily decides she believes her and leaves.

More: Deconstructing Y&R: Teen scene dialogue is so sketch we want to bounce

Juliet orders a martini at the Club bar. Later, Hilary appears and apologizes for confronting her previously. Juliet reveals Victoria threw her under the bus and Hil offers to listen if she wants to vent. They sit down and trash Victoria’s leadership skills. Juliet feels there’s nothing she can do. Hilary thinks she has more power than she realizes.

Billy arrives at Brash & Sassy, where Victoria and Cane have made peace. She tells Billy she rejects his resignation – she fired Juliet and needs his help on a new promotion. Victoria warns he’ll have to prove himself again and be more careful. Billy agrees. Vikki wants to reschedule the San Diego trip, but he wants to focus on work. At home, Cane and Lily discuss Juliet’s termination. Lily hopes it leads to a better opportunity for her.

Nikki enters Victor’s office and asks, “What have you done now?”

Chelsea says to Nick, “Please go back with me. I’m positive Chloe’s in that house.”

Chloe grabs a pair of scissors and raises them over her head, preparing to plunge them into Dr. Harris’ back.