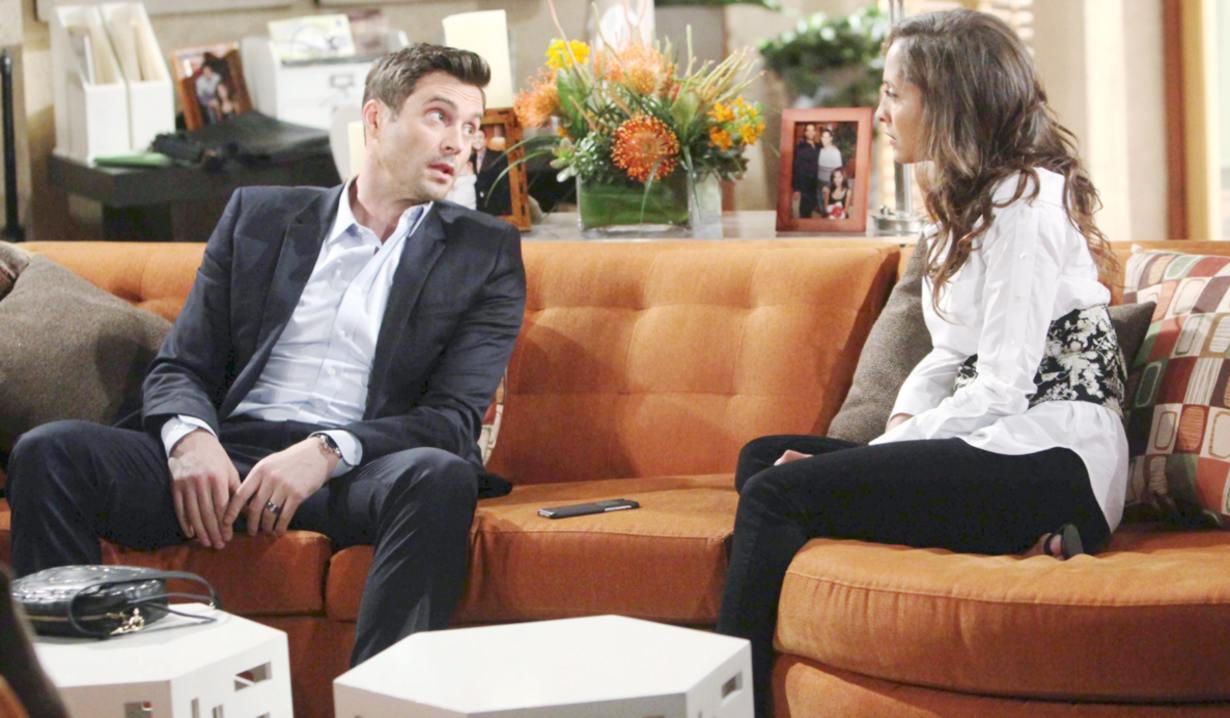 Cane arrives at Brash & Sassy and asks Juliet what the emergency is. She tells him Hilary knows about their one-night stand. Cane loses his temper with Juliet, who informs him she overheard them talking early – both of them. She goes on to say she warned Hilary to keep quiet. Juliet is confident she won’t risk a slander lawsuit by going public. Cane, hyperventilating slightly, tries to believe it.

Hilary watches the footage of her conversation with Juliet at GC Buzz. Mariah enters with Devon and asks if she’s looking at their next big story. Hilary deflects, and in a moment alone, Devon compliments Hilary on her interview with Julie Chen. She returns the favor by congratulating him on his deal with Dina Mergeron. Mariah reappears with a flashdrive to drop off at Lily’s. Hil offers to do it for her. Once alone, Hilary switches it out with the flashdrive on which her conversation with Juliet is saved.

More: Dancing With the Stars winner to appear on Live with Kelly and Ryan

At Jabot, Jack and Phyllis spar verbally and Phyllis warns him not to celebrate Billy’s demise just yet. She also suggests he not kick his brother when he’s down. Jack predicts the day will come that she’ll have to face reality, like Victoria, and kick Billy to the curb; it’s inevitable.

Reed slams into his house, where Billy warns the kids are asleep. Reed figures he and Victoria got back together in Cali, but Billy says that’s not happening and changes the subject to Reed slamming the door. Reed fills him in on Zoey lip-locking with Charlie the human jock strap. He rants about Kendall setting him up to see it. Billy thinks he’s better off knowing now and advises him to ‘rise above’. Reed heads upstairs. Phyllis knocks and Billy invites her in. She didn’t like how they left things earlier. Billy reassures her. They beam at each other and flirt. He is kissing her goodnight at the door when Reed appears. Once alone, Reed confronts Billy, who isn’t sure why he has to explain this – Victoria should have told him he was dating Phyllis. Reed reacts angrily and Billy informs him his situation is different than Reed’s with Zoey. Reed’s glad he’s Johnny and Katie’s dad…and not his.

Nikki’s impressed with Tessa’s work as they discuss the concert at the Club. Tessa comments on Nikki’s sad musical selections. Nikki realizes she needs to inspire hope. Jack appears and introductions ensue. Once Tessa leaves, Nikki invites Jack to join her and updates him on her concert, which is a command performance courtesy of Victor. Jack loves the idea but wonders what’s going on with Victor that she’d question his motives. He knows something’s bothering her. Nikki cops to having some marital issues, but insists they’re working through them. Talk turns to family and Nikki realizes he saw Dina again. Jack admits he’s not sure what to think about it. Phyllis appears and sees them hugging goodbye.

Charlie arrives at home and bickers with Mattie as Lily asks them to dial it down. Hilary arrives – she has a flashdrive containing her interview from Mariah. Lily questions her doing something nice, but Hil says she feels a certain responsibility for the hockey debacle. They snipe back and forth, and Hilary warns Lily to screen the footage before sending it out. Lily sets the flashdrive on her laptop. Soon Cane arrives and lies that Juliet wanted to strategize about the hockey deal. The family gathers in the living room and Cane crows about Lily’s work in Los Angeles. Charlie brags about his sports and reports on his near-fight with an indie rocker at the coffee house over a girl. After, Cane learns that Hilary dropped off the flashdrive to Lily and persuades her to have sex now and watch it later.

Mariah and Devon greet Noah at The Underground. Devon has to take a call from Mergeron and Mariah asks Noah about Tessa. He reveals he’s concerned she’s in some kind of trouble and fills Mariah in on what he knows. Tessa arrives and Noah leaves her to hang out with Mariah, who lets her know she’s aware of her situation. They commiserate about people breaking your trust and Mariah reveals she was once in a cult. They bond further over plans for a horror movie sleepover night. Tessa takes the stage and reports she changed her mind about singing a song about goodbyes. After she sings, Devon tells Tessa he wants her to be the first artist they sign. Tessa is super flattered but wants to think about it.

A woman says to Nick and Chelsea, “I can tell you about Chloe. For the right price.”