Y&R Day Ahead Recap: Cane plots against Billy during the commercial shoot

Wednesday May 17, 2017: Hilary meets her idol, Mariah nets a huge interview, and Billy tries to keep Phyllis’ presence in L.A. a secret. 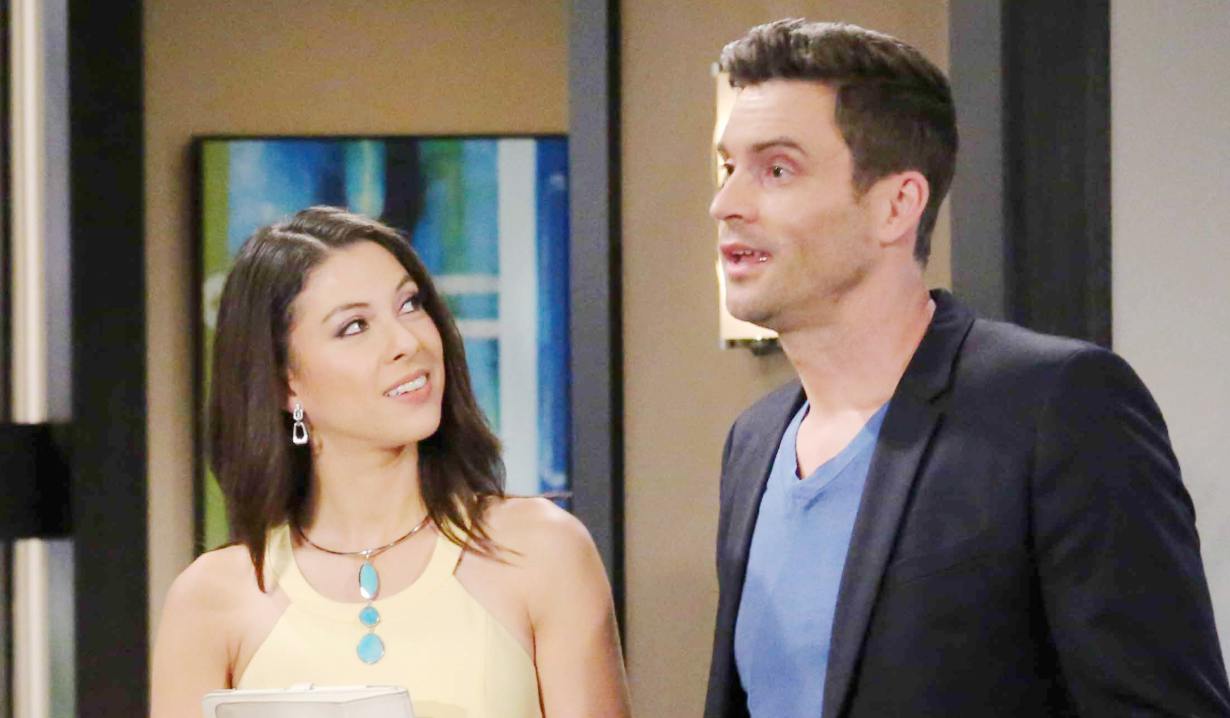 On the set in Hollywood, Cane tells Juliet they’ll have to troubleshoot since Billy hasn’t appeared yet. Nearby, Lily seeks reassurance from Jordan that she won’t suck, and Cane intervenes to reassure her. After, Cane instructs a videographer to capture what goes on behind-the-scenes.

At the hotel, Billy chides Phyllis for being so damn sexy as he rushes to leave. He reminds her Victoria can’t know she’s in L.A. In the lobby, Vikki phones Billy, who appears in the elevator claiming to have overslept. Vikki enthuses about their trip to San Diego, but he just wants to get through today. At the rooftop bar, Hilary is with Howard Green (played by David Faustino), who’ll produce her Hollywood segment. They spot The Talk’s Julie Chen, who is Hilary’s idol. Hil approaches Chen and showers her with compliments before asking to do a piece with her on camera. Chen says it’s not possible, but notices Hil’s disappointment and invites her to check out “The Talk” set. Hilary hurries back to Howard, and assures him she’ll get her interview. Soon, Hil sees Phyllis settling onto a lounger. Phyllis asks her not to tell anyone she saw her. Hil agrees – she’s too busy to drag her through the mud.

At the set in Hollywood, Billy and Victoria introduce two hockey players to Cane and Juliet, who takes them to meet Lily. Cane snipes about having to do everything since Billy wasn’t there. When the players go to wardrobe, Juliet warns the others not to post any behind-the-scenes footage of them without the league’s approval.

Ashley arrives at the Abbott mansion, where Jack reveals he saw their mother last night at the Club. Ash hopes he didn’t welcome her with open arms. Jack gossips about Dina’s younger boyfriend and reveals they were with Gloria. They debate about whether to update Traci. Jack says Dina wants time with her family. Ash wonders what exactly her family would be at this point. They argue over whether or not to welcome her.

At Devon’s penthouse, Dina admires the real estate and Neil moves to call Michael so they can finalize the paperwork. Devon wants to throw a party, but Dina nixes the idea. Talk turns to her family – she admits to having seen them and notes it didn’t go well. Devon hopes she won’t give up. Dina worries her family would take a party the wrong way. Devon has an idea.

At GC Buzz, Devon and Neil encourage Dina to go on air with Mariah. Dina agrees to the interview if Devon appears with her. Mariah tells Devon there’s one hurdle, and looks at the ‘Hilary Hour’ sign. She places a call to her boss to get permission. Hilary balks because Mariah scored the interview through Devon.

Behind-the-scenes on set in Hollywood, the hockey players talk about Lily being hot and joke about betting on their game with Billy – it’s all caught on video. Later, Cane declines dinner with Lily to edit the footage, and Billy tells Victoria he’ll have to go back to his room before meeting for drinks. Over on “The Talk” set, Hilary and Howard approach Julie Chen, who agrees to give them five minutes after an effective appeal by Hil. Julie talks to Hilary about how being told ‘no’ repeatedly motivated her, and advises her on how to get along better with Mariah. Chen feels Hilary has a bright future in the business. Howard tapes Hilary in Julie’s chair after she leaves. Back on the hockey set, Cane has the videographer edit the footage of Billy and the hockey players to suit his needs. At the hotel, Billy realizes Phyllis isn’t in his room. At the rooftop bar, Victoria arrives to meet Billy; unaware that Phyllis is nearby.

At the Abbott mansion, Jack gets a text from Gloria to turn on GC Buzz. He and Ashley watch as Mariah reports that Dina Mergeron is there to make a stunning announcement. Devon reveals Hamilton-Winters has purchased Mergeron Enterprises, and Dina claims her motivation for the changes is her family. She talks about Katherine and about re-establishing relationships. Ashley hisses, “Well done, Dina.”

Nick says to Victor, “You want me to spy on my girlfriend and report back to you.” Vic nods. “That’s right.”

On air, Hilary, seated with Lily, says, “Let’s see what the man himself has to say.” Edited footage airs of Billy and the hockey player making a $10,000 bet. Cane, Juliet, and Victoria all watch on their phones, and Billy looks stunned.