Y&R Day Ahead Recap: Billy tells Victoria he couldn’t do it anymore

Wednesday May 3, 2017: Cane is pleased with an outcome, Devon and Neil meet with Dina Mergeron, and Gloria and Jack support one another. 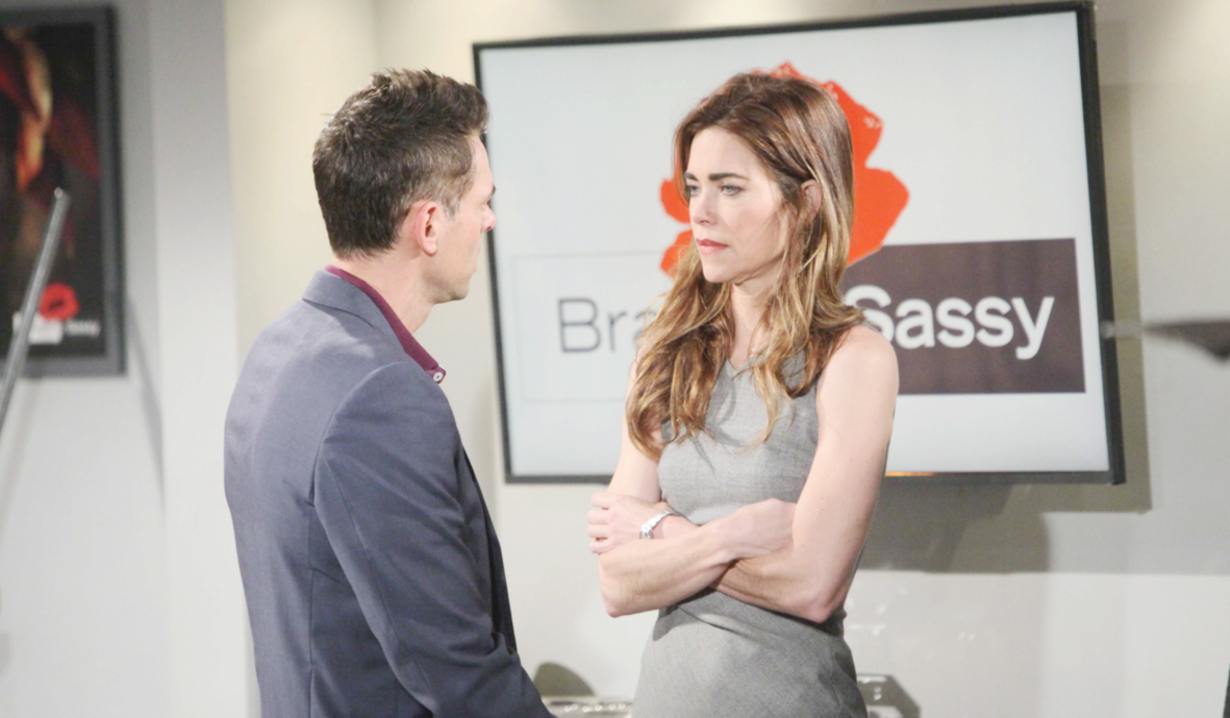 At Brash & Sassy, Billy tells Victoria this was not how he wanted this to happen. Lily appears and Cane takes her away. Billy says he didn’t want to hurt Victoria, who replies that he keeps doing it. Phyllis interjects that Victoria has hurt Billy many times. She cares about him and thinks he deserves more than Vikki is capable of giving. Billy protests that he spent months trying with Victoria and it was never enough. She accuses him of defaulting back to Phyllis, who pipes up to says she’s not ashamed of what they have, and insists it’s not about her. Victoria asks if Phyllis is the woman he wants. When he hesitates, Phyllis urges them to talk and heads for Jabot. In the office, Billy tells Victoria he tried to tell her about Phyllis but she told him about Nikki’s MS and he didn’t want to add more drama to her life. Victoria concedes that she said things she didn’t mean to him, but wonders at him ending up back in Phyllis’ bed so quickly. Billy reminds her she slammed on the brakes – he didn’t think she wanted him. He couldn’t keep doing it. Vikki dismisses him. In the lab, Cane tells Lily that Billy won’t be able to throw his weight around now. Lily is taken aback he thinks this is good for him. Cane thinks Victoria is better off. Billy emerges from the office, and warns Cane not to gloat. They argue. Cane goes in and tells Victoria he’s there for whatever she needs.

At Newman, Victor compliments Abby on doing a good job in his absence and then shares that her grandmother is in the news – Dina Mergeron’s company is for sale. He muses that it might be a good time to make a big acquisition. Abby reflects on how Ashley never mentions Dina. Victor muses she was a complicated woman and John Abbott deserved better.

In Devon’s jet, he and Neil discuss how to seal the deal with Dina. Neil warns his son not to get his hopes up too high since it’s not just about money; it’s personal. Dina has had the company for decades and they don’t know what she wants from a buyer.

Ashley enters Jack’s office, where he shows her the article about their mother’s company being up for sale. Ash tightly tells him as long as Dina stays away, she doesn’t give a damn about her or her company. Later, Gloria joins Jack and updates him on Bella’s paternity. Jack feels Billy must have been relieved. Glo is concerned about Kevin, who is happy, but needs support considering he will be raising a girl who’s been abandoned by her mother. Jack reassures her about Kevin being capable and credits Glo with making her family whole again. Jack shows Gloria the news involving his own ‘abandoning’ mother. Glo is sorry for his pain, and they talk about the wounds that never heal. In Ravi’s office, Phyllis encounters Lauren, who senses something is off. Phyllis confides that she just got what she wanted…in the worst possible way. She fills Lauren in, who supportively reassures Phyllis that she’s not ‘the bitch in the elevator’. She asks if Jack knows. Phyllis says he will soon, and worries Billy’s only back with her because Vikki turned him down. She wonders if they can do normal. Lauren advises if this is her man, then fight for him, but don’t settle for less than what she deserves. After, Billy finds Phyllis. He tells her not to feel guilty – now they can be together for real. They embrace.

At the Club bar, Ashley flashes to arguing tearfully with Dina about her real father being Brent Davis. Victor appears. They sit and discuss Abby being hard-working and determined. Vic brings up Dina. Ash doesn’t want to talk about her.

In Paris, Dina Mergeron (played by Marla Adams) greets Devon and Neil on their jet. She’s accompanied by a man named Graham (played by Max Shippee), and wants them to tell her why they should be the one to take the prize. Neil and Devon make their case and Neil butters her up. Dina muses that their company is only in the conceptual stage and is ready to leave. Neil promises they’d build on her legacy, which gives her pause, but Devon’s heartfelt appeal in which he reveals he’s Katherine Chancellor’s grandson is what grabs her attention.

Abby asks Ashley, “Why don’t I know my only living grandparent?”

Cane says to Victoria, “Because he’s a good dad, that’s a reason to let him keep working here?”

Billy says to Jack, who is standing with Gloria, “There is something Phyllis and I want to tell you.” Phyllis adds, “We wanted you to hear if from us.”