Tuesday April 25, 2017: Lauren learns Scott met someone, Kendall finds a new way to get close to Reed, and Abby strikes a deal. 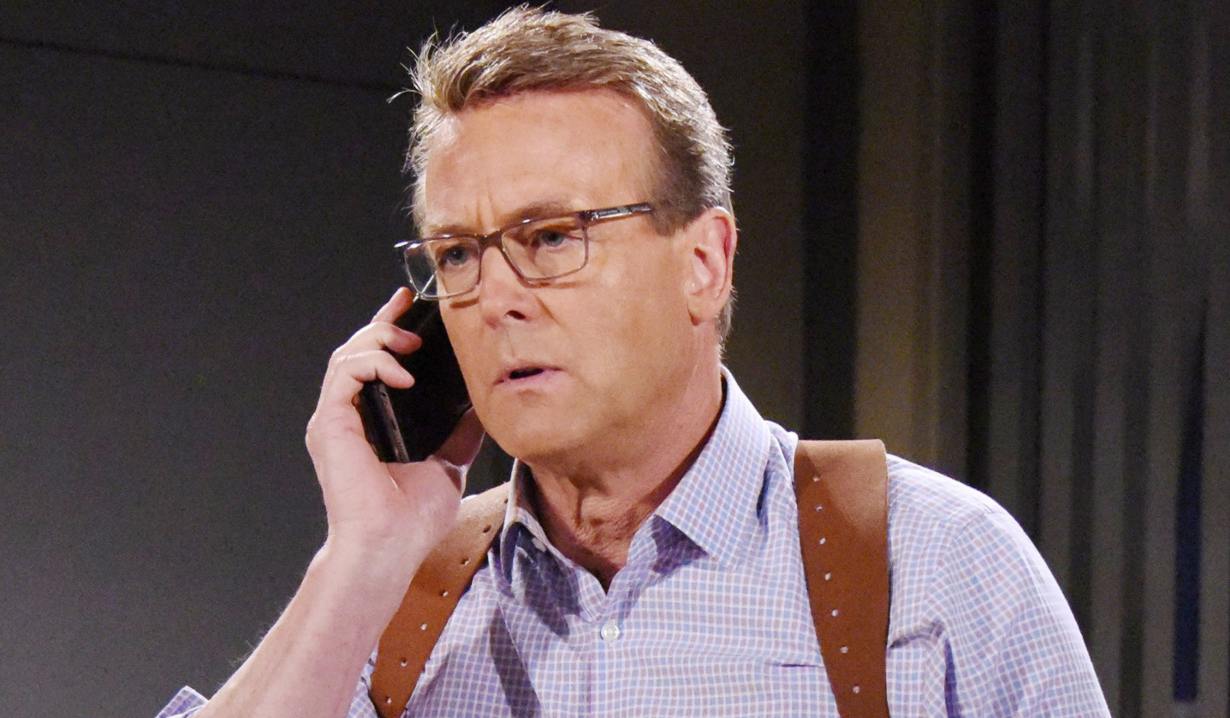 At home, Scott is considering calling Christine when Lauren enters. He tells his mother he’s been lonely and was hoping she’d set him up with one of her girlfriends. Lauren sighs. “Phyllis told you?” Scott knows she wanted to keep him in town. He says Phyllis is gorgeous but he’s met someone. He won’t share her name.

At the police station, Kevin and Billy argue about Chloe. Billy questions why Kevin’s not as angry as he is – he’s defending a murderer. Kevin’s concern is Bella. He warns if she’s Billy’s, he’d better pull his act together. Billy steps out to take Phyllis’ call – there’s no news yet. Later, Paul gets the paternity test results. Kevin and Billy open their envelopes and lock eyes.

Sharon arrives at the Newman ranch and introduces herself to Tessa, who reminds her she played outside Crimson Lights. Sharon wants to leave a seating chart with her, and Tessa admits she’s a little overwhelmed. They talk, and Sharon recalls how nervous she was when Nick first introduced her to the Newmans. They bond over having come from nothing and Tessa says Nikki revealed her past to her. Sharon warns Tessa not to get on the wrong side of Victor.

At Jabot, Ashley talks to Ravi about her concerns regarding Abby, who may have inherited her father’s penchant for messing things up. Ravi offers to talk to Abby since they’re the same age, but then scrambles to apologize, and explains he and Abby have parents with high expectations in common. Ravi alludes to things going well and they share a smile.

More: May Sweeps spoilers for Y&R and other soaps

In the Club, Jack tells Abby he’ll take the warehouse off her hands but won’t sign until she tells him what’s going on. Abby opens up about her start-up plan – she needs to unload the warehouse before her dad finds out. Jack gloats that she has Abbott blood and outmaneuvered Victor. He wants in on her start-up plan. Abby worries about her father finding out and asks what’s in it for him. Jack wants the chance to work with his niece and to make a lot of money. They hug as Ravi appears. Once Abby’s alone, Ravi tries to start a conversation. Abby advises him to tell her mother she’s fine and leaves.

On the Crimson Lights patio, Kendall listens as Zoey asks Reed to the movie they just saw together and Reed slips that he already saw it. Kendall jumps in to change the subject. Reed steps away and Zoey tells Kendall she wants to be alone with Reed. Kendall grabs Reed’s wallet and leaves. Later, Scott arrives to see Sharon and flirts with her over pastries. Sharon wonders why he’s interested in her. Scott says she’s smart, funny and attractive – he wishes she’d stop putting herself down. He really wants to see if there’s something between them.

Michael arrives home with Kevin, and Lauren wonders why they look shell-shocked. Kevin reveals that he took a paternity test after receiving a letter from Chloe and it proved he is Bella’s father. He frets about what kind of father he will be. Michael and Lauren are supportive and reassuring. They all hug. Esther arrives and expresses happiness over the news. She offers for Kevin to move in to the mansion. Kevin will consider it, but first has to tell Bella the news.

Billy arrives at Phyllis’ place and pours a drink. He reveals he’s not Bella’s father. Phyllis asks if part of him hoped he would be. Billy sighs that he’s relieved; Bella being Kevin’s daughter is the best thing for everyone. They embrace and then cuddle as he notes how supportive she’s been. Phyllis feels he’s the only man who thinks being with her makes things easier. Billy says she’s been with the wrong men…until now.

Reed joins Tessa at the ranch for his music lesson and receives a text from Kendall that she found his wallet at the coffee shop. He asks her to bring it by. When she arrives, Reed invites her in. Tessa hears about her sending Reed’s tape to her uncle and muses that she’s his guardian angel. At the door, Kendall pulls a thankful Reed into a deep kiss. Tessa grins.

At the park, Kevin tells Bella that he’s her real-life father. She’s happy. Kevin picks her up for a hug.

Hilary walks up to Neil and Devon and says, “Good morning, Gentlemen. See you in court.”

Phyllis tells Jack, “You’re guessing right – there is someone.” Jack asks, “Anyone I know?”

Victoria says to Billy, “I just get the feeling that you want to talk. I’m here to listen.”

Y&R Day Ahead Recap: Hilary and...