Y&R Day Ahead Recap: Jack and Ashley battle over Ravi

Tuesday April 11, 2017: Victor must face his family, Reed has a new admirer, and Billy and Victoria get honest. 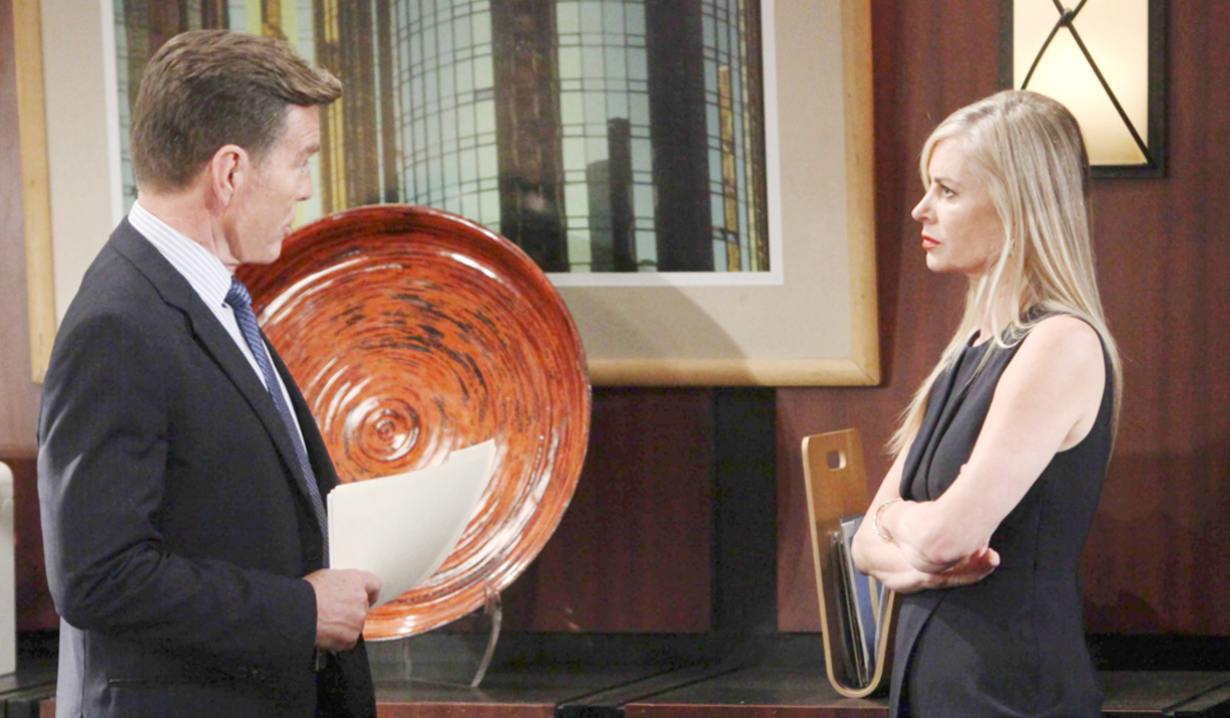 Paul arrives unexpectedly at the ranch, which alarms Nikki. Paul reveals that Chloe killed Adam and explains it was Nick who began to have suspicions. Nikki worries about Victor going after Chloe. Paul leaves, and Nikki tries unsuccessfully to reach Victor.

In the airport hangar, Nick yells at Victor that Chloe confessed to killing Adam and now, thanks to him, she’s gone. They discuss Chloe’s confession. Nick fills him in on all the details. Looking agonized, Vic wonders why didn’t come to him sooner. Nick reminds him he worked with Chloe to frame Adam and put this chain of events into action. Vic won’t deny it. He rehashes how Chloe double-crossed him when they worked to frame Adam. If he’d known what she was up to, he would have given his life to save Adam’s – he loved him. Nick shakes his head. “How can you live with what you’ve done?” Nick threatens to have his father arrested. Victor wonders why he hates him so much and says if he loves the family, he’ll do as he asks.

Reed arrives at Crimson Lights and hangs with Zoey and her friend, Kendall. Zoey learns Reed isn’t getting a new car for his birthday and assumes his mean mom shot the idea down. Reed invites them to his party. When Kendall gets a moment alone with Reed, she apologizes for laughing during his performance previously and reveals she’ll make it up to him by sending his video to her uncle in the music business. After, Kendall is clearly jealous when Reed kisses Zoey.

Billy greets Victoria at the Club, and talk quickly turns to work. He doesn’t like being lumped in with Cane. Vikki admits he’s in a different category. Billy and Victoria rejoice about closing the pro hockey deal in spite of Jack. Billy remarks that you don’t mess with a Newman. Vikki notes his insinuation that she’s like her father. Billy concedes Victor taught her well in business, and had the good sense to marry Nikki and produce beautiful Victoria. Talk turns to their personal lives. Vikki admits her split with Travis was difficult, and Billy says he sometimes misses Phyllis. She’s glad they are where they are. Billy reaches for her hand, but Nick summons her to the ranch.

New: New Kids on the Block’s Joey McIntyre on Live With Kelly

At Jabot, Jack teases Ravi about his new threads and learns he’s joining Ashley at the conference. Jack digests this news, and assures Ravi he’s an asset to the company. Elsewhere, Ash thanks Phyllis for her help with the app and then plays dumb about seeing Ravi in a new light. Phyllis says, “You’re welcome.” Ash huffs that she needs Ravi’s professional expertise at the convention. Phyllis thinks it’s an act – she’s testing the personal waters. After, Ashley meets with Jack, who is surprised to hear that Phyllis is behind Ravi’s makeover. They spar about Ashley making decisions behind Jack’s back. She suggests he stop giving her reasons to. Later, Phyllis snarks at Jack about hiring Gloria before talk turns to Ravi. Phyllis reveals that Ash is taking him to the opera in New York. Jack needles Phyllis about being interested in Ashley’s personal life, and turns down her invitation to ‘get a bite’. In the corridor, Ravi is dazzled when Ash reveals they’re flying on the private jet. Jack calls Ashley into his office and demands to know what’s really going on between her and Ravi. Ash is irked. Jack warns it could get ugly as Ash shouts, “We’re not involved!” She reminds him the myriad ways he’s brought his personal life into the office. Jack counters that she’ll break his heart and then they’ll lose him. Ash snaps, “Mind your own business.”

Still in the airport hangar, Nick tells Victor that Victoria’s on her way to the ranch; dealing with the cops would have been easy compared to what he has to do now.

At the ranch, Nick and Victor arrive shortly after Victoria. Nick reveals that Chloe murdered Adam. Nikki hugs Victor, who says there’s more… Once the family knows about him recruiting Chloe to help him frame Adam, Nikki becomes upset that he collaborated with an unstable woman and lied to them. Vic gets a call from the pilot and reveals that Chloe was flown to Thunder Bay, Ontario and then sped off in a car. He vows to bring her to justice, but Nikki says he’s just as responsible. “Your son’s death is on your hands!” Vic booms, “I don’t need to hear that from you!” Nikki heads upstairs and Victoria and Nick exit.

Phyllis runs into Billy at the Club bar. He reveals things are going well with him and Victoria, but she hasn’t said she wants to get back together. Phyllis thinks her actions speak for themselves.

Jack, with a rumpled Gloria beside him, says to Phyllis, “Gloria and I are both single, we’re not hurting anyone.”

Nick says, “He is just as guilty as Chloe for killing Adam.” Nikki replies, “And no one can ever know about it.”