Y&R Day Ahead Recap: Kevin breaks down after emotional talk with Bella

Monday April 10, 2017: Nick confronts Victor, Chelsea does the unexpected, and Sharon opens up to Scott. 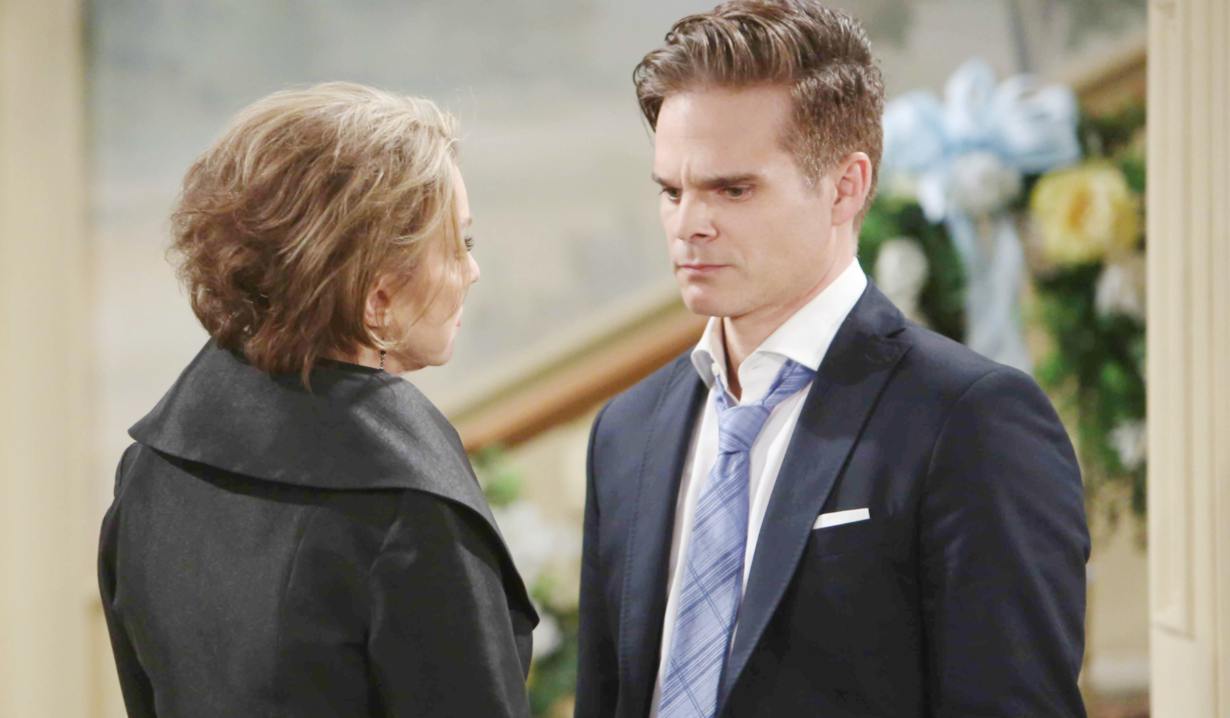 At the airport hangar, Victor pulls Chloe inside where she implores the Mustache to call for a plane to get her out of there – he’ll never have to see her face again. Vic wants no part of it and starts to exit, but Chloe hollers at him. She threatens to tell everyone about their little collaboration. Outside, Nick takes a tearful call from Chelsea, who tells him he was right about Chloe, who took off and could be anywhere. Nick keeps watch on the hangar as Chelsea describes how she found out the truth and confronted Chloe. Nick wonders if she mentioned having an accomplice. Chelsea’s phone is dying and she wants to meet at his place. Nick pretends she’s breaking up and disconnects. In the hangar, Chloe implores Victor to make the call, but he wants an explanation. Nick sneaks in and strains to listen as Chloe lies that Chelsea found the evidence she framed Adam – it implicates him too. Vic intones, “What evidence?” Chloe says Chelsea found the diary and rants about what his family will think of him framing Adam. Victor arranges for the jet and warns Chloe not to return. Nick confronts his father, but Chloe has already taken off. Nick can’t believe Victor let her get away, but quickly deduces that Chloe was the one who helped him frame Adam. Nick rants about him bringing a lunatic to town to frame Adam, and announces that he has now let his son’s killer escape. “Chloe blew up that cabin. She murdered Adam!”

At Sharon’s place, she assures Chelsea that Nick’s not upset with her. Chelsea can’t believe she was so gullible and looks forward to testifying against Chloe. She leaves, saying she’ll get justice for Adam…tonight.

At the Chancellor mansion, a still distraught Kevin tells Michael that Chloe isn’t well and needs help. Michael knows he loves her, but doesn’t want him to cling to hope that it’s all a mistake. Esther appears as Michael asks Kevin to admit Chloe’s guilty. She snaps at Michael, who reveals he’ll represent Chloe if she’s found. Kevin decides it’s time to face the truth, that Chloe did this horrible thing. The brothers embrace, Glo clasps their hands, and Esther cries. Gloria sits by Esther, to warn Chloe needs psychiatric help. Esther pleads with Kevin that she could still be innocent, but Kevin shows her the note. Bella appears. Kevin breaks the sad news to her that there will be no wedding and her mom has gone on a trip. After, Michael reluctantly leaves Kevin alone with their mother. Glo grabs his face and says, intensely, “I am so proud of you.” They embrace. She admires him for staying strong and comforting Bella. Kevin breaks down sobbing that he woke up this morning with a family and now he’s alone. Gloria holds him. “I will never abandon you.”

More: Hallmark’s Moonlight in Vermont set to debut this Saturday

At GC Buzz, Mariah is still agonizing to Devon about whether or not she should report that Chloe murdered Adam. Devon opts to stay out of it. Mariah rushes off and Hilary spots her ex. She realizes Devon went to Kevin’s wedding with Mariah and muses about them getting serious, assuring him it’s not a problem. Mariah reappears, hollering about not being sure whether to air Chelsea’s bombshell. Hilary wants answers – what are they keeping from her? Once she knows the huge story, debate ensues about what to do. Hilary snaps that she’s the boss. Devon regrets giving her the show when she talks like that. They are all arguing loudly when Chelsea appears, demanding to be put on the air. They prepare. Chelsea is taken aback for a moment by a photo of Bella on her phone, but they go live. Unexpectedly, Chelsea makes an appeal to Chloe to come home because she’s not well. “Think about your daughter. Please just come home.”

In Crimson Lights, Lauren and Scott marvel that Chloe worked and lived with Chelsea for months knowing she’d killed her husband. Scott recalls what Chloe said when they were dancing – she was talking about pre-meditated murder. After, Sharon arrives and joins Scott to compare notes on Chloe. Scott can’t imagine what losing a child would do to him. Sharon softly says she can, and tells him about Cassie. Talk turns to Adam and Sharon talks about when he first came to town. Scott reserves her as a valuable source for his book. At home, Michael admits he feels guilty for not pushing harder for Kevin to slow things down. Lauren clucks that no one could see this coming. Michael feels he should have. He worries about Kevin ever loving again. Michael is grateful to have Lauren.

Victoria says to Billy, “I guess what I’m saying is that I’m glad we are where we are right now.”

Paul tells Nikki, “I got some information tonight about Adam’s death, and I thought you would want to know.”

Victor asks Nick, “Why do you hate me so much? Why?”