Wednesday March 30, 2017: Nick plants a tracker on Chloe's car, Chelsea and Chloe get into it over her whereabouts the night Adam died, and Juliet has an interview with Victoria. 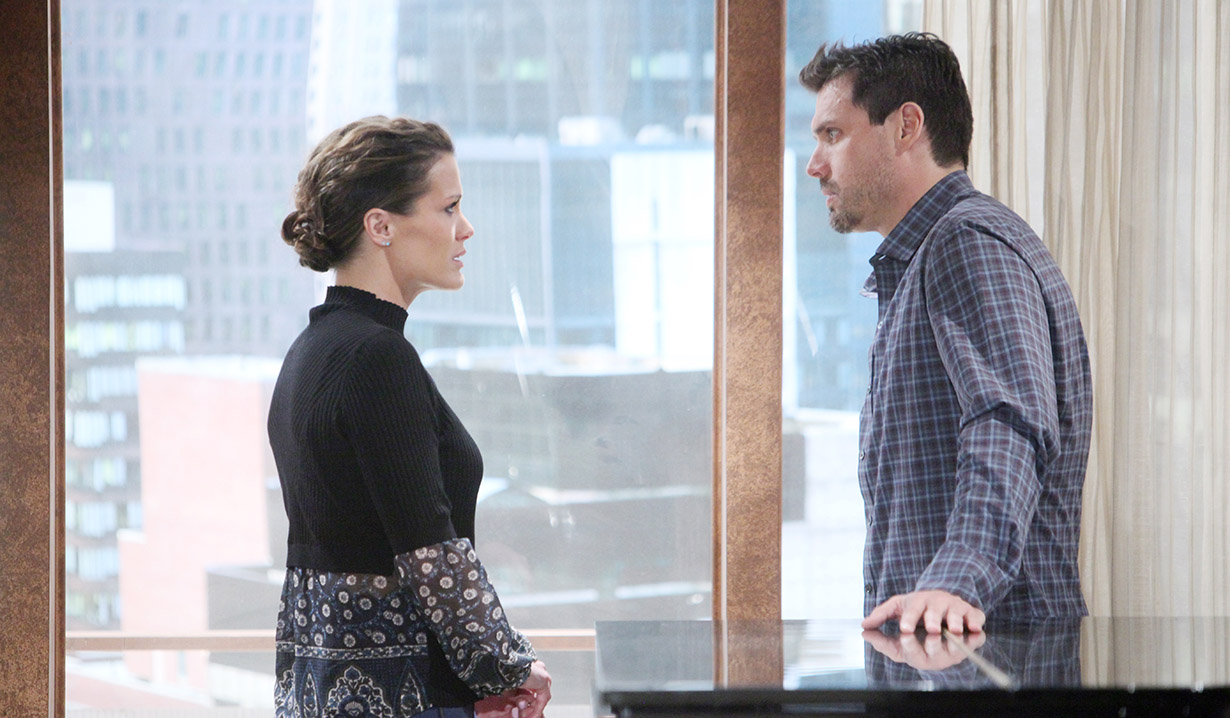 At the penthouse, Nick downs coffee and debates with Chelsea on whether Adam’s death was caused by Chloe or an accident. Though Nick can’t let it go, they decide not to discuss it further. They move toward a kiss when Chloe walks in. Nick takes off and Chloe gushes over her dress that Chels has been working on. Outside, Nick places a GPS under the back, right-hand wheel well of Chloe’s car and goes. Meanwhile, Chelsea brings up the tracker in the kid’s toy and says she never has to keep things from her. Chloe apologizes. They agree they’re each other’s BFFs and Chelsea asks if there’s more about that night she hasn’t told her. Chloe denies it and Chelsea barks out, “Nick and I traced your cell phone. You were half a mile away from the cabin an hour before the explosion, so why didn’t you tell me that?” Chloe feels betrayed and asks how much money Nick paid the drone to tell him where her phone ‘pinged’. She maintains she was at the penthouse – with Kevin. Chelsea insists she was on Chloe’s side but Chloe can see it’s past tense. She doesn’t blame her, either, because she tried to run Adam over in the past. Chelsea knows Chloe worked at trying to get well after that. She believes what happened to Adam was an accident. They hug and Chelsea tells Chloe to go on and plan the wedding. The fall collection can wait.

At the Club, Abby meets with Ashley and fills her in on Victoria turning Victor against Abby’s new idea for investing in young entrepreneurs. Ashley thinks she can overcome their doubts. Abby fills her mom in about Vikki gloating about pulling a stunt with Jack. Ashley considers her words and calls Victoria her father’s daughter. Talk turns to Scott writing Victor’s autobiography. It puzzles them.

Related: Flashing back to Y&R in the good ole 80s

At the Brash & Sassy lab, Cane tells Victoria he’s grateful she hired him. Vikki says after he proved himself in Tokyo, they never have to have this conversation again. He grins. “Deal.” Juliet appears for her interview and Vikki goes to take a call. Juliet admits she’s nervous she doesn’t have enough leadership skills. Cane tells her it’ll come in time. Later, during the interview, Victoria appears happy with Juliet and thinks the woman reminds her of herself. Once the interview is over, Juliet lets Cane know she crushed it. She goes and Cane approaches Vikki who says Juliet doesn’t have enough experience. She’s going with someone else. Cane’s let down but offers to give Juliet the news.

Related: Ben Hermes returns to Y&R as Hochman in April

At Crimson Lights, Lily and Jordan discuss his new photography work. He thinks once her contract is up, Lily can work as much as she likes and become famous. She ponders that but tells him her family grounds her.

At Jabot, Neil tells Jack that Ashley offered him a job. Jack’s pissed and asks what prompted it. Neil confides that Ashley’s not comfortable with his judgement as of late. Jack can’t believe his sister went behind his back. Neil interjects. He turned the offer down. Jack relaxes and Neil confides about his new business venture with Devon, buying and selling companies. Jack calls it “risky business,” but is happy for him – as long as he doesn’t sell cosmetics! Neil feels a lot of pride that they’re building a family business together. They wish each other the best and Neil goes. Later, Ashley lets herself in and immediately says, “You lied to me,” just as Jack says the same thing. They argue and Ashley hopes it won’t come back and bite them in the butt. Jack tells her about Neil and Devon starting a new business. If Cane and Lily leave and work with them, that could spell trouble for them if they start a cosmetics line. They need more ideas.

At The Underground, Noah tells Nick about wanting Tessa to return for another engagement. Nick wonders if his son has an ulterior motive, knowing she’s cute. Nick’s attention is on his cell phone and Noah asks what’s up. Nick says there’s tension between him and Chelsea.

Cane meets Juliet at the Club and tells her she didn’t get the job. She tells him he doesn’t have to worry about their secret. Cane’s confused so she fills him in, telling him they had sex. His face goes pale.

Nick watches as Chloe stuffs something into a garbage bin in some alley. Once she’s out of sight, he rummages and comes up with a black bag.

Victoria finds Abby at Crimson Lights. Vikki hopes her sister is not still upset about turning down her new idea. Abby says things might turn around.

Back at Underground, Nick dons gloves before opening the black bag, where he finds a dart gun and a wrench and looks stunned.

Abby, exasperated, tells Scott that she honestly feels as though she’s on the outside in her own family’s company.

Victoria tells Victor, “You don’t have to feel obligated to provide Abby a role in the company.”

Sharon tells Nick that Paul is his best bet. “If you want the truth, that’s the way to go.”