Tuesday March 28, 2017: Gloria isn’t happy with Kevin’s announcement, Scott signs on for a new assignment, and Victor meets up with Chloe. 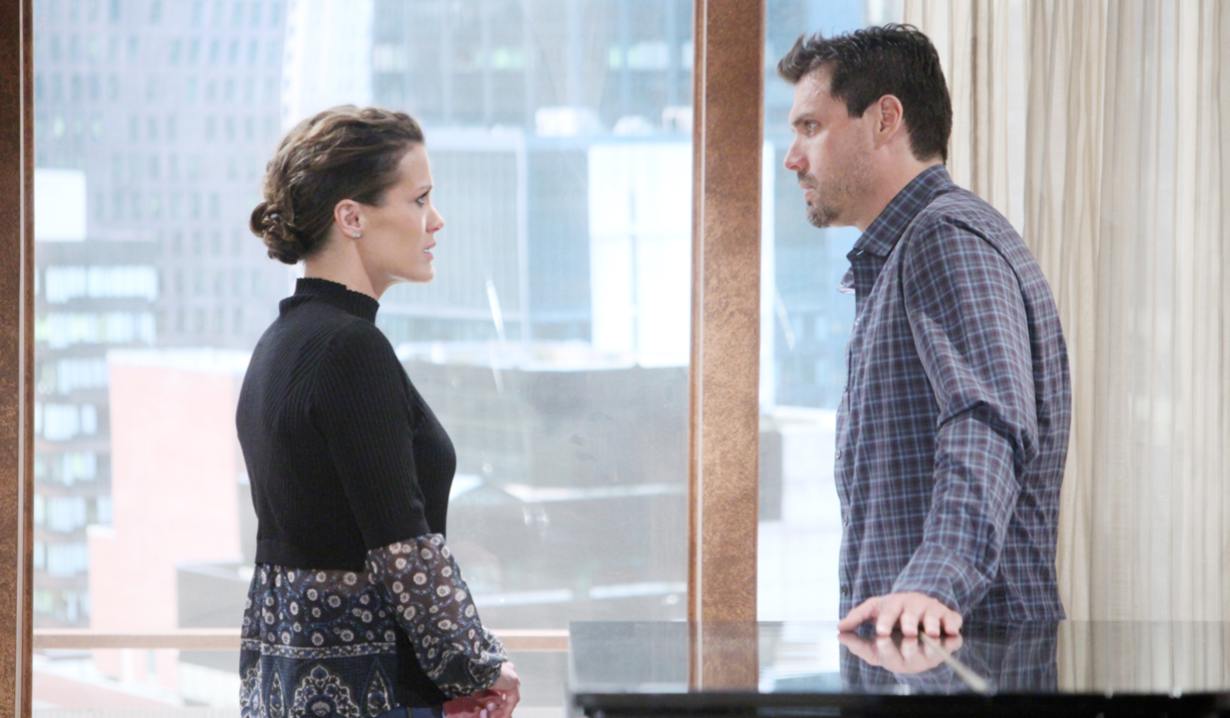 At the penthouse, Nick says his connections will help them to find out if Chloe left the night Adam died. Chelsea is hoping she’ll be exonerated. Nick makes a case for dealing with things before they deal with you. When he goes to the kitchen, Chelsea flashes to a conversation with Chloe about Adam. Soon, the call comes in – there are cellphone pings proving Chloe left the penthouse that evening. Chelsea paces and argues that there is still no definitive proof. “I’m done with this.” After, she reappears upset, and they hug. Nick knows how close she is to Chloe, but he won’t drop this. “Your best friend may have murdered your husband.”

At Crimson Lights, Kevin and Chloe awkwardly meet with their mothers. Kevin announces they’re getting married. Esther is thrilled but Gloria shoots her son a dirty look. She remains stony as Esther suggests they marry at the Chancellor Estate. Chloe and Esther step away and Gloria presses Kevin on whether he and Chloe are really ready for marriage. She predicts it’s never going to come true and arguing ensues. Glo reminds him Chloe won’t even tell him who Bella’s father is, and Kevin hollers that they’re going to be a family. Glo plans to make him realize this is a mistake. Nearby, Esther promises Chloe a princess wedding. Chloe rejoins Kevin and Gloria, and tells her future mother-in-law she understands her having concerns. She promises never to hurt Kevin again and asks for a second chance to prove herself. Glo turns and walks out. Chloe tells Kevin she won’t let his mother, or anyone, mess with what they have.

Related: Latest news from Y&R and all four soaps

More: This week’s spoilers for Y&R and all four soaps

In the park, Jordan reveals to Devon that he is off to GC Buzz as Hilary booked a photo shoot to promote her new ownership. Devon makes a dig about Jordan’s interest in his wife. Jordan reminds him they signed divorce papers and it’s not his business. Devon questions her moving on so quickly. Jordan brings up Mariah. Devon thinks that’s justified since they have a long-term friendship. Jordan wonders if Devon will ever be okay with Hil moving on and points out if she trusts him, it doesn’t matter how Devon feels.

Hilary gathers her staff to announce she’s the new owner and give a pep talk about the need to go viral. After, Mariah compliments Hil’s speech, and they debate about whether to keep the focus on Genoa City. When Devon’s name comes up Hil gets a little snappy and reminds Mariah to stick to the script. After their segment, Hilary dismisses the staff and bickers with Mariah about her interest in Jordan. Hil says it’s personal. Jordan arrives and Mariah takes a call from Devon, and agrees to meet him. Gloria arrives and thanks Hilary for cutting the ‘Clarissa’ interview short and asks her to get rid of the footage. Hil will do it for Jack. Glo struts over to announce to Mariah that Kevin and Chloe are engaged and they must stop the wedding. Mariah reminds her their attempt to be more than friends was a debacle – if Chloe makes him happy she’ll support it. She suggests Gloria get on board. Later, Jordan tells Hilary her shots are missing her usual sparkle. He gives her a pep talk and the next shots blow him away. They make out.

At Newman Enterprises, Scott swigs a scotch and demands to know Victor’s reason for writing his memoir at this time. Vic says it’s his legacy; he wants his family to know the truth about how much they mean. Scott asks if Adam’s death prompted the idea. Vic concedes he wants everyone to know he loved Adam, but he also wants people to realize if they cross him or anyone in his family, they’ll deal with him. Scott warns he will dig and get the truth. Vic’s fine with it. They shake hands.

Mariah finds Kevin at Crimson Lights and reveals Gloria ambushed her with his plans. Kevin gratefully accepts her congratulations and is tickled to hear she’s possibly seeing Devon, who appears on the patio. Mariah joins Devon and he confirms he wants to date her. They blushingly rehash their kiss and he shares his plans to start a company with Neil. They agree to stay friends if things don’t work out. In the park, Chloe thinks back to meeting with Victor in the hospital, and to the events in the cabin. She is about to dispose of the tranquilizer gun when Victor appears, noting she makes him feel queasy – she’s a little monster. Chloe reveals she’s engaged – thanks to him she has everything she’s ever wanted.

At GC Buzz, Hilary and Jordan are barely dressed. He kisses her and lifts her up in his arms.

Nikki tells Victor, “Tessa was playing outside the coffeehouse for tips.” Victor replies, “In other words, you brought a stranger to the house.”

Chloe tells a puzzled Kevin, “I want to get married tonight.”