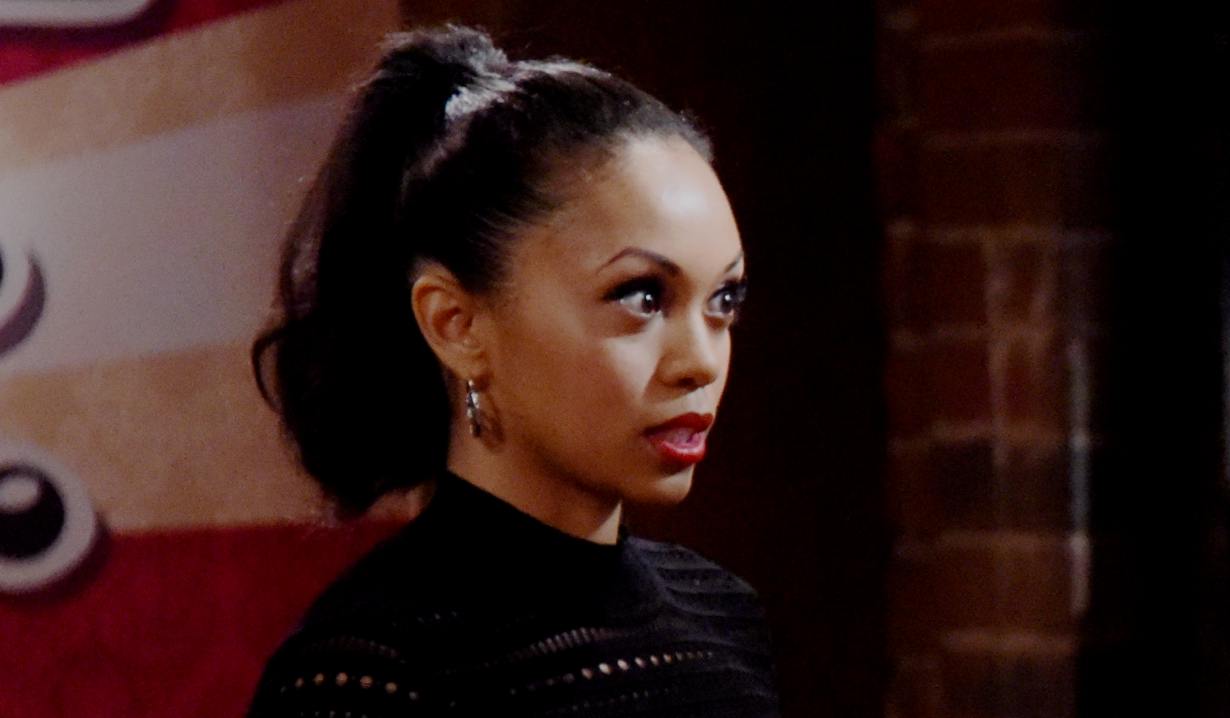 In Brash & Sassy’s office, Victoria and Billy reel from the revelation that Gloria accused Jack of sexual harassment. Billy muses that they’ve got Jack where they want him, though he can’t believe he harassed Gloria – he can’t stand her. They speculate on whether there’s any truth to the story. Billy thinks they have to use the footage to get Jack to back off the hockey deal. Victoria informs him he’s thinking much too small.

At Jabot, Gloria impresses Jack with her report and ideas for the men’s line. He marvels that she thought of every angle and pleases her by telling her to keep it rolling. Later, Billy arrives in Jack’s office despite Gloria’s protests. He lets them know that Victoria is pissed about the hockey deal and found the ‘Clarissa’ video. “She’s not afraid to use it.”

Jack and Gloria accompany Billy into the Brash & Sassy office where Victoria plays a snippet of the video and threatens to share it so the whole world will know Jack’s a snake. Jack glowers as Victoria instructs him to undo the damage he did with the pro hockey league deal and then they’ll see whose hands the footage falls into. Jack gets on the phone and complies. Victoria then demands an apology for Billy. Jack admits it was a cheap shot. Victoria hands over the footage – she was never interested in scooping to his level. Gloria thanks God it’s over and follows Jack out. Billy is moved by Victoria defending him.

In The Underground, a drunk Chloe rambles to Scott about how she took control of her destiny and took charge. He asks what she did. Chloe goes on about crushing grief with a jackhammer and slurs that they need cake and fries. When she adjourns to the restroom, Scott claps Kevin on the shoulder and says Chloe’s a trip. Kevin brags about how strong she is and marvels that she healed, though it’s not clear how. Scott says she seems to know exactly how…and when.

More: CBS soap stars to appear on The Talk.

In Chelsea’s penthouse, she and Nick reflect on grief and connecting with someone who has also experienced loss. Nick thinks they need to get out and have some drinks. Chelsea worries about running into people who will ask her about Adam. Nick signs over Sage’s inheritance money and kisses Chelsea goodbye, but she changes her mind about going out – she can’t keep sliding back.

At GC Buzz, Jordan and Hilary discuss Lily. Hil muses that she’s going to be her ex sister-in-law and notes things have changed around there. Jordan flirts, saying he’s a big believer in change. He asks if their date tonight is about Devon. Hil assures him she wants to celebrate her freedom with him…at The Underground.

Mariah and Devon arrive at The Top of the Tower for dinner and she questions whether it’s a date. He responds, “You tell me.” Mariah declares they’re just friends – he’s her boss – and Devon challenges whether she’s afraid of Hilary and teases about her being a chicken. Talk turns to money and they discuss growing up without any. Mariah suggests they ditch the fine dining and head to The Underground.

Chelsea and Nick enter The Underground, greet Scott and Kevin, and Chloe throws herself at Chelsea, slurring to Scott that she’s a survivor like them. Kevin peels her off, and Scott is about to walk them out when they run into Devon and Mariah, who gushes over Scott’s work. Nearby, Hilary and Jordan belly up to the bar and spot Devon and Mariah. They debate about how to handle things, and Hil reveals that she asked Devon for GC Buzz in the divorce. Across the way, Mariah points out Devon’s ex, but he assures her he’s fine to stay put. Mariah thinks Devon needs a real date – any girl would kill to be in her position. Devon teases her about being his work buddy. Mariah looks over at Hilary and pulls Devon into a kiss. Hilary adopts a death glare that doesn’t go unnoticed by Jordan. Meanwhile, Chelsea leaves and Nick talks to Scott about their situation, Adam’s death, and Chloe. Nick wonders what she said to Scott. He reveals that something turned her life around…six months ago.

In the car on the way home, a tipsy Chloe rants away to Kevin about how he’s always waiting until she comes around. She assures him she’s around…all the way around.

At home, Chelsea spots Connor’s blue stuffed dinosaur and flashes to packing it to run away with Adam. She thinks about the explosion that killed him.

In bed, Chloe dreams of the cabin exploding and startles violently, waking Kevin.

Nikki asks Nick, “If that explosion wasn’t a fluke, what caused it?”

Kevin reveals to Michael that he plans to ask Chloe to marry him.

Bebe Rexha Shuts Down Instagram Livestream After Man Exposes Himself