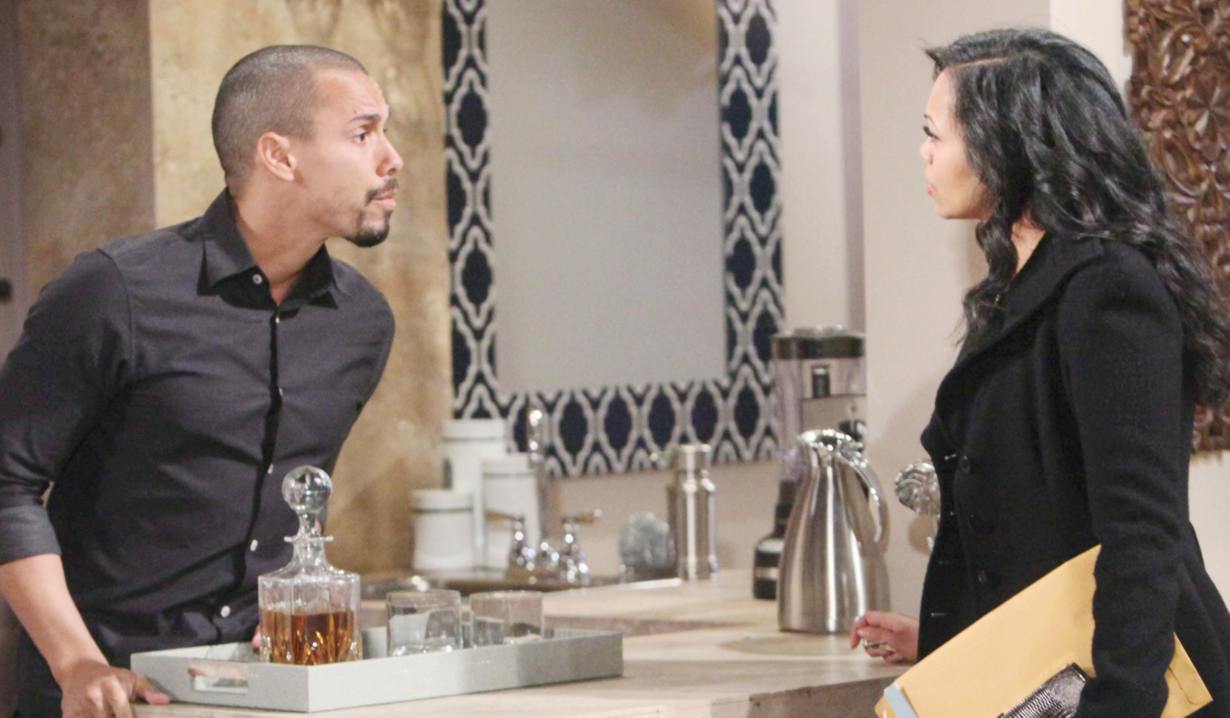 In Devon’s penthouse, he tersely questions Hilary giving him an ultimatum. He accuses her of dating Jordan to make him jealous. Hilary laughs that he played games by kissing her and then not contacting her. Devon snarks that he learned from the best. Hil is exasperated and Devon cracks up cynically at her analogy that they’re on a carousel they can’t get off. He turns serious – no one has affected his life as she has, and he doesn’t think anyone ever will. Hilary demands to know what he wants from her. They yell back and forth. Devon shouts that he doesn’t want to be with her, but doesn’t want to live without her. They kiss and the mood turns passionate. Later, Hilary tells a shirtless Devon this was another thing they shouldn’t have done. They sit closely on the sofa and recall their good memories, including their wedding. They discuss their issues in a more somber tone. She understands why he can’t trust her. The pair sadly acknowledges that they love each other but their marriage is broken; they have to end it. Hil has tears in her eyes as Devon signs the divorce papers.

At Brash & Sassy, Victoria paces and makes Billy antsy as she waits to hear about the Asian deal.

In Japan, Juliet is sympathetic – she knows Cane didn’t mean to insult Mr. Sato, but warns him against trying to apologize and make things worse. Cane huffs and grimaces as Juliet goes to talk to Sato. He glances at a text from Victoria and stresses. He calls and with a hand over his eyes explains he hopes to have good news for her soon.

At Brash & Sassy, Billy tells Victoria that it sounds like Cane lost the deal. He suggests they not hang by the phone and head over to see Reed perform at The Underground.

In The Underground office, Mariah tells Reed she knows what he’s feeling since she face-planted on live TV. She delivers a cheesy pep talk and urges him to go out there and blow the roof off the place – everyone will respect him for it. Reed is down on himself for choking. At the bar, Noah greets Vikki and Billy, and explains Reed’s in the office. Billy cautions Victoria not to intervene. She spots Zoey and heads over to ask what happened with Reed, who soon appears with his guitar.

Billy drags Vikki away. Reed confronts Zoey about laughing at him. She clarifies they were laughing at a photo and apologizes. Reed softens and agrees to sing for her. Vikki groans as Zoey kisses Reed’s cheek. Billy coos that it’s cute. Meanwhile, Noah gives Mariah a drink for helping Reed and opens up about his break-up with Marisa.

At Lauren and Michael’s place they share an emotional reunion with Scott and Kevin. Lauren softly implores her son to tell them what happened. Scott describes being attacked and dragged from the car and put into a truck. He was driven somewhere and put into a dark room and moved from place-to-place. Scott thanks Kevin for being persistent and Lauren for paying the ransom. She credits Victor. Michael sadly relays that there’s been no news on his driver. Scott chokes up – he needs to know what happened to him. Rattled, he asks to use the phone. Lauren urges rest. She thanks Kevin, who embraces Scott before leaving with Michael for dinner. When Lauren goes to make tea, Scott looks unsettled. After, he marvels that he’s there after all that went down. Lauren asks him about his experiences, and questions if it’s time for him to settle in one place. Scott becomes angry, even as Lauren pushes. He informs her he won’t be staying in Genoa City.

At The Underground, Noah introduces Reed, who takes the stage and sings. Victoria exits to take a call from Cane. Reed looks disappointed. In the office, Victoria is thrilled to hear Cane came through. “Good job.” Meanwhile, Reed finishes and he and Zoey gaze at each other. Vikki updates Billy that Cane sealed the deal. They toast to success.

More: The Catch’s Peter Krause on Live with Kelly

In Japan, Cane drinks Sake with Juliet. “You’re a lifesaver.”

At Crimson Lights, Kevin tells Michael what he saw in the Middle East got to him; he won’t take things for granted. Michael grills him about Scott, who seemed off. Kevin confirms he was disturbed and seems haunted by his experience.

Nick says, “When I think about my future, Chelsea, I absolutely see you in it.”

Faith asks Sharon, “How can I be happy for daddy when you’re all alone?”

Kevin says, “Who cares, Scott? You’re home.” Scott confides, “This doesn’t feel like home to me, and I’m not sure it ever will.”