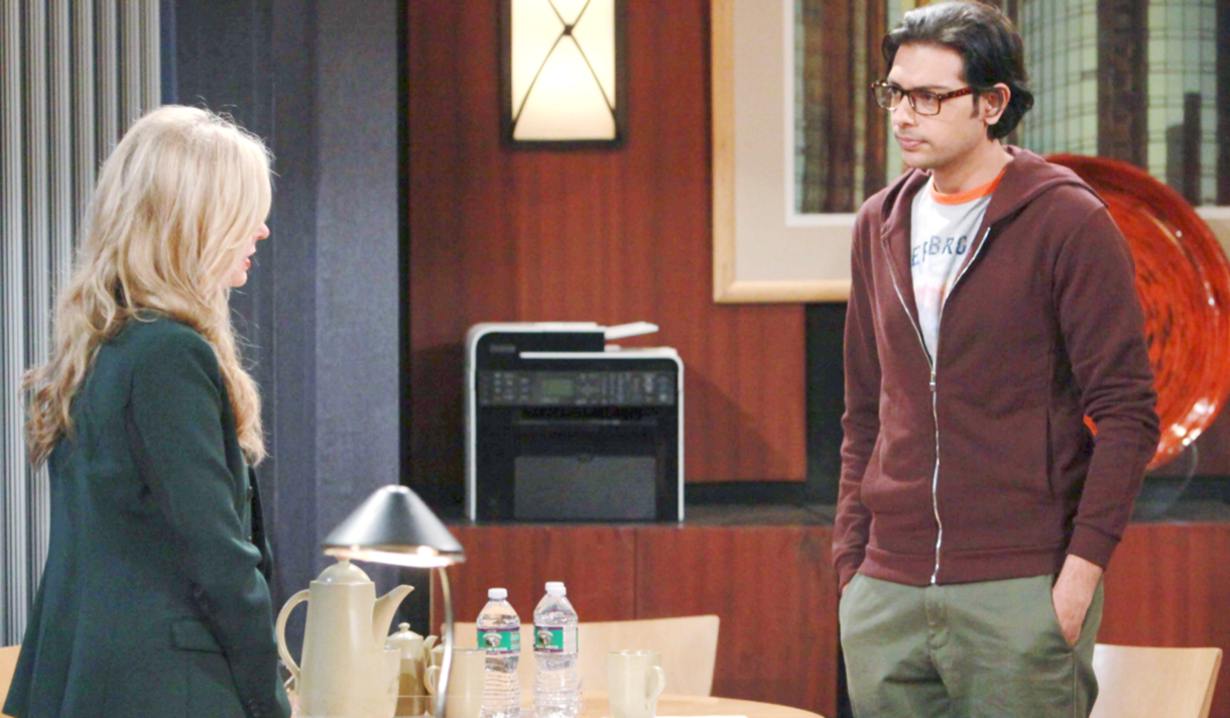 At the Chancellor mansion, Jill moodily removes Katherine’s portrait from the wall. Devon drops in and notices it on the sofa. Jill sighs about it being a long story. Amused, Devon thinks she found a way to keep the feud going. Jill replies that Katherine did that. As Devon puts the portrait up, he offers to help her out. Jill is touched. Talk turns to Colin, and Devon observes it would be tacky to celebrate their split. She beams. “That’s right, you married a barracuda of your own.” They commiserate about not being able to live with or without them. Jill and Devon realize they have both learned they can’t afford to waste one precious second of life.

At Cane’s house, Colin learns his son is going out of town and worries he’ll have to leave as well. Cane reassures him that Lily won’t throw him out. Colin gets a call that makes him happy. He relays his plan to pay back Jill’s money legally and leaves.

At the Club, Lily and Neil reflect on Cane’s trip and Colin being a thorn in her side. Neil protests when he realizes she’s hoping he’ll take Colin in. They speculate whether Jill will ever take him back. Lily has to get rid of him.

Hilary complains about Mariah’s wardrobe at GC Buzz. Mariah is stunned to hear they’re doing a photo shoot, and angrily accuses Hil of being in sabotage mode again. It turns out that’s not what happened, and they make nice. Jordan appears and flirts with Hilary, who mentions that she’s separated from Lily’s brother. She flirts back as they discuss work. Mariah reappears, transformed, and in a moment alone, grills Hil about her love life. Hilary turns vulnerable – her kiss with Devon was amazing but she’s gotten mixed signals ever since. Frustrated, she ends the talk and returns to Jordan. Devon arrives and observes the shoot with a hint of consternation. After, Jordan tells Devon how hot Hilary is and reveals he’d like to ask her out. Devon gives him the go-ahead but seems discomfited. Devon and Hil keep an eye on each other and Jordan asks her for drinks later. Hilary seems intrigued that he asked Devon’s permission and invites him to stick around for the show. Devon pulls Mariah aside and learns that Hilary said yes to Jordan.

Phyllis glumly enters Ravi’s office in an ill-fitting dress ordered from Fenmore’s app. They agree it’s an easy fix and talk turns to Ashley. Ravi, irritated, wonders why everyone assumes he and Ash can’t be an item. Phyllis teases him about his unrequited crush and kindly advises him to let go of the quest. Elsewhere, Ashley counsels Abby about confidence, and announces she’s taking a bigger role at Jabot. Abby grimaces when her mom mentions Ravi, and warns she’s going to break his heart. They debate. Ash sighs – the crush will fade away when he meets someone his own age. Abby animatedly pushes her point-of-view until Ashley throws her hands up and concedes – she’ll handle it. Once alone, she summons Ravi to establish that they will never be friends. Ravi, irked, asks, “Is that it?” Ash kindly nods. He needs to know why and proceeds to shoot down all her arguments. Ash laughs, but turns serious. She’s concerned his crush will ruin what they have. Ravi accuses her of caring more about what people think than what she wants. Phyllis notices him exit looking deflated.

Abby runs into Neil at the Club and admits she’s avoiding the office due to problems with a deal. Neil oozes sincerity as he tells her Victor finally found the right Newman to run the company. “You are so like Victor.” Neil reveals it never worked out for him because of his last name. Abby wants to lure him back. Neil passes, but advises her to listen to Victor and follow her instincts.

At home, Cane kisses Lily and coos that they have to discuss Colin. Lily, annoyed, questions Cane about Colin’s supposed plan to pay back Jill. Cane vows to put him out if he does anything illegal. Lily kisses Cane goodbye and they embrace.

Colin strolls into the Chancellor mansion. Jill snaps that he’d better have her ring. He holds it up. Jill gasps as she looks at the ring and questions whether Katherine really ever intended for her to find it. Colin acknowledges her emotional state, but reminds her the ring is worth more than what it would take to buy the Fenmore’s shares and, he hopes, could make things right with them too. Jill tearily thanks him for getting the ring but she can’t forgive him for lying and stealing. Disappointed, Colin says he won’t give up and troops out. Jill flashes to Phillip and puts on the ring.

Victoria warns of a crucial meeting.

Mariah tells the GC Buzz audience what they’re about to see may seem shocking.

Lily asks Hilary if it’s possible for her to not sleep with someone she knows.