Y&R Day Ahead Recap: An emotional Jill rages about being deceived

Monday March 6, 2017: Lauren is a basket case over Scott, Sharon and Nick talk to Faith, and Colin is in a tough spot. 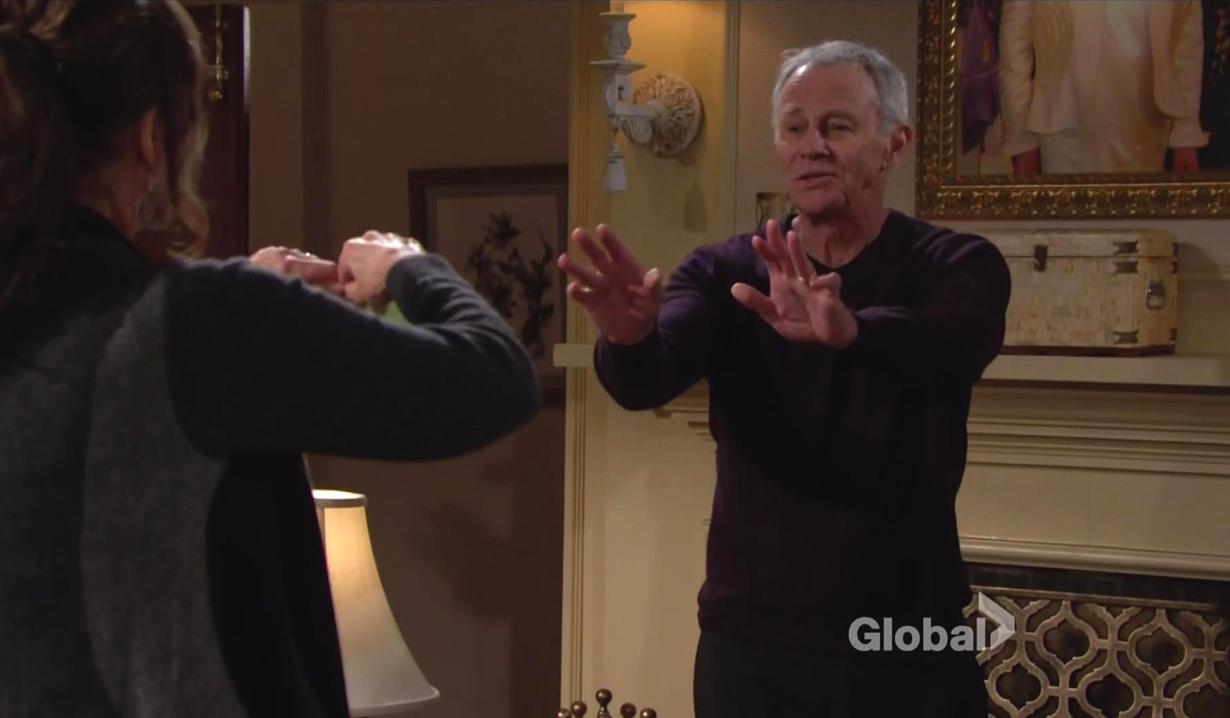 At the Club, Victor and Michael are concerned about an exhausted Lauren, who frets about Scott’s well-being and snaps over them telling her how to feel. Victor takes a call from Kevin, who reports that Scott wasn’t where he was supposed to be – the kidnappers got cold feet.

Lauren grows upset at the possible implications. She cries as she recalls debating with Scott about his dangerous job. They all look at a map of Kevin’s location, and Victor assures them the kidnappers will keep Scott alive for the $10 million or they won’t see a dime. Lauren sneers at Vic’s concern for his cash, but quickly apologizes. After Victor leaves, Michael assures an agonized Lauren that she didn’t offend him.

In the Chancellor mansion, Colin explains to Esther that Jill invited him there. Once alone, Colin is all congeniality as he assumes his check is the reason Jill wanted to see him. Jill calmly sips tea as he goes on, but then confronts him about robbing her a second time to repay her, and reveals she knows about the key and safety deposit box. Jill tauntingly explains how she figured it all out. She wants to know what was in there that Katherine wanted her to have and threatens to rip his check in half. Colin protests loudly. He pours a drink and explains how he found the music box. Too late, he realizes their issue was not about money, it was about trust. Jill huffs that what Katherine left her was worth more than a dollar amount. Colin admits it was a ring. Jill becomes emotional and then frustrated over Colin not thinking about anything beyond saving his sorry ass. Jill clutches her neck and marvels that Katherine found the ring Phillip intended for her and kept it all these years. Colin protests – how was he to know the ring was important? Jill moans that Phillip was the love of her life. Colin thinks they can build something together, but Jill angrily kicks him out, check in hand, and demands that he get back her ring. After, Esther finds Jill raging about Katherine’s deceit. “I will never forgive you!”

Nick and Chelsea exchange a gentle greeting as they wake up together at the penthouse. Since they don’t have to go to work, they make love. Later, downstairs, they canoodle contentedly and discuss going public. Nick must talk to Faith. They kiss goodbye and Chelsea grins to herself.

Sharon arrives at the ranch to get Faith and Nikki invites her to hold Christian. Faith appears and demands to know why Nick didn’t pick up Christian last night. Sharon presumes he had something to do. Faith looks pointedly at Nikki and reveals he had a date. Faith steps out and Nikki updates a stunned Sharon on Faith’s attempt to sabotage Nick and Chelsea. Sharon’s puzzled since Faith likes Chelsea. Nikki points out both of Faith’s parents are single and available. Sharon looks thoughtful. Nick arrives. Sharon reveals she’s going back to college, and they discuss Faith’s behavior. Nikki exits, and Sharon proposes to Nick that they talk to Faith together. Their daughter appears and apologizes. Sharon and Nick lecture about faking medical emergencies and manipulating. Sharon serenely reassures Faith that she is fine on her own and they should be happy for Nick and Chelsea.

At Newman, Nikki looks over Victor’s shoulder as he converses with a crackly sounding Kevin, who is at a new location but gets cut off. Nikki and Victor discuss the grim situation until the phone rings again.

At the Club, a frazzled Lauren gets a call from Victor summoning her to his office. Michael startles as she smashes a glass in her haste to leave.

Nick calls Chelsea from the tackhouse and amuses her with tales of Christian’s dinner menu. She lets him go when her doorbell rings.

Chelsea is surprised to see Faith and Sharon at her door. Faith says she owes her an apology. Sharon enthuses about how happy they are for her and Nick and Chelsea offers up hot chocolate. Sharon is proud of Faith, who says she wants Chelsea to know how she really feels.

At the coffee house, Colin meets with Jasper and demands he get the ring back.

In Victor’s office, Lauren sobs with relief to see Scott (played by Daniel Hall) on the video call. She tells him to come home. There’s no place he would rather be. They thank Kevin before signing off. Lauren throws herself into Victor’s arms. “Thank you so much!”

In the Middle East, Scott flinches when Kevin tries to help him up. He slowly rises and says he’s going the other direction. Kevin hopes he’s kidding. Scott looks shifty but then leaves with Kevin.

Ravi asks, “Why, Ashley? Why is it so impossible for us to be more than friends?”

Hilary tells Mariah, “You need to get it together, alright? Our photo shoot is about to start.” Mariah asks, “What photo shoot?”

Jordan informs Devon he was thinking about asking Hilary out on a date. “Would that be a problem, Chief?”