Y&R Day Ahead Recap: Jill has another jolting realization about Colin 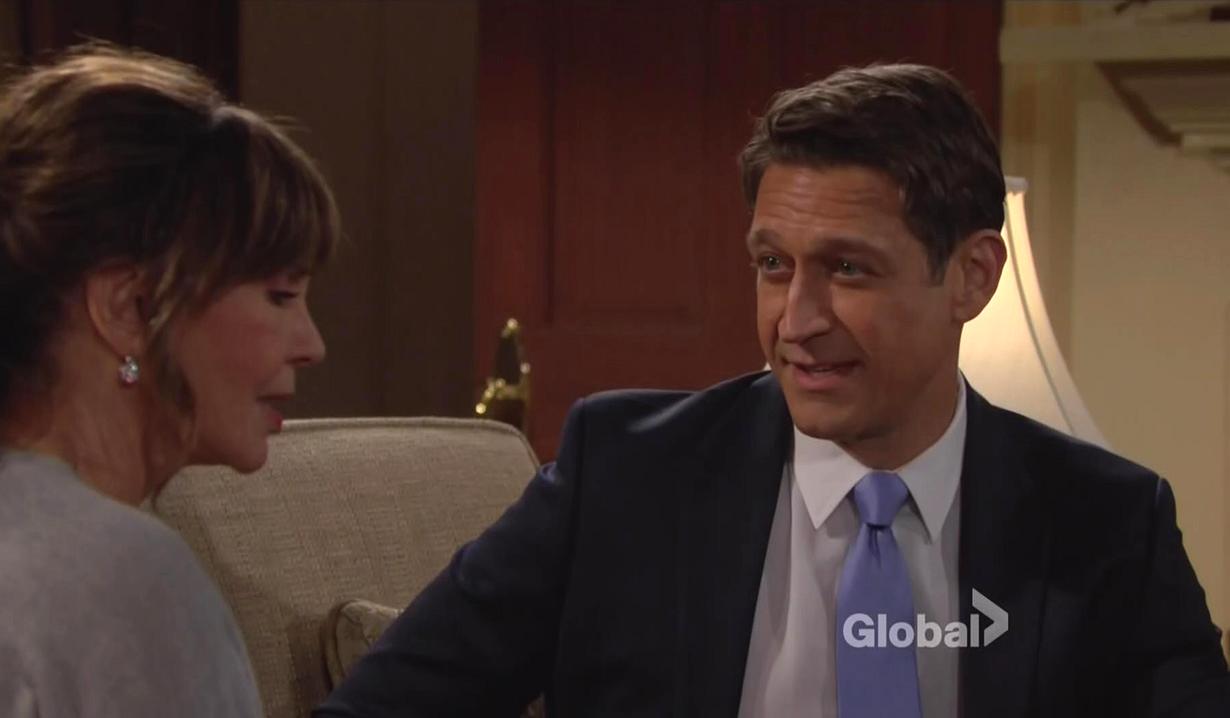 At the penthouse, Chelsea seems nervous about Nick hanging around but then asks for help with her dress zipper. The air becomes charged briefly, and then Nick reveals the truth about Faith’s call. Chelsea is worried about his daughter having a problem with them being together.

They realize that this is all because Dylan left. Chelsea agonizes about the complicated situation, but Nick makes a heartfelt speech and they kiss. After, they quietly marvel about being together. Chelsea’s not afraid anymore. In a poignant moment, they both remove their wedding rings and embrace. They move upstairs and slowly undress and make love.

Jill is irked with Esther trying to get in on the conversation with Murphy at the Chancellor mansion. Murphy mentions the key in the music box, and Jill hollers in frustration – there wasn’t one! Murphy insists he didn’t put the letter in her mailbox and he was the only one who knew about it besides Katherine. Jill grits her teeth. “How the hell did you pull this one off, Katherine?” Murphy reveals that Katherine was very mysterious about it all and chuckles over her brilliance. He’s apologetic that he can’t help more. Jill asks what Katherine was bequeathing to her – what was it that Phillip always wanted her to have?

Murphy only knows the key was for a safety deposit box and its contents. Jill figures someone found it, stole the contents, and left her the letter. They get choked up talking about Katherine as Murphy reveals that making peace with Jill was first on her bucket list. Jill is still bewildered over the decisions Kay made. Murphy chuckles about her wanting the last word. Jill’s voice cracks as she tells the portrait, “I love you Katherine, and I’m sorry too.” Esther reappears and the women see Murphy off. Jill apologizes for snapping at Esther earlier and muses about the mystery.

At Jabot, Phyllis and Ravi are wound up over something and wonder who will tell their bosses. In Jack’s office, Ashley tersely informs him she can handle anything that happens while he’s away. They are bickering about him hiring Gloria when Phyllis and Ravi enter. Phyllis enthuses that the Fenmore’s app has exceeded all expectations. Ashley gushes about Ravi’s accomplishment. He is quick to share credit with Phyllis. Ash concedes that acquiring Fenmore’s was a good move, but insinuates that Phyllis stole her resource – Ravi – and breezes out with him to celebrate.

A disgruntled Phyllis is left with Jack, who tries to assuage her angry feelings. Phyllis senses his generosity is because he’s moved on. She jokes about him trying to convince her he was seeing Gloria previously. She’s about to leave when he grins about a text. Phyllis teases him, but hopes he’s genuinely happy.

A frazzled Lauren enters Victor’s office and urgently asks if he and Michael have heard anything about her son. They talk about checkpoints and gently urge Lauren to go rest or eat. Lauren narrows her eyes – they’re trying to get rid of her. She asks Victor for the truth. Vic can’t promise Scott will come back safely. Sighing deeply, Lauren wishes Scott had chosen a safer profession. Abby enters with a crisis. Victor tells her to handle it herself, but she’s insistent. Michael takes Lauren to eat and Victor advises a rattled Abby.

At the Club, a hostile David Sherman informs Colin he advised Jill to divorce him and press charges. Colin has something that might change her mind. Sherman chuckles cynically, but Colin produces a cashier’s check for the amount of money he took from Jill.

Nearby, Ash shares a toast with Ravi as Abby appears. Her mother senses tension and Abby sits and complains it’s not easy working for Victor. Ash invites her to come work for her, but Abby’s sticking where she is. Colin approaches. Ash informs him Jill’s deal for Fenmore’s is no longer on the table. Ash steps away to tell Colin about the surge in Fenmore’s fortunes, and Abby warns Ravi not to expect anything to happen with her mother. Ravi awkwardly reassures her.

David Sherman arrives at the Chancellor mansion with Colin’s check, and says he wouldn’t divulge how he came up with the money. Jill’s eyes narrow – she knows exactly how he paid her back.

In Victor’s office, a triumphant Kevin video calls that he has passed the first hurdle and will call when he has Scott. Elsewhere, a man in ripped jeans with a bloody knee and a cloak over his head is removed from his cell.

Sharon says, “Nick had something he had to do.” Faith looks at Nikki pointedly and says, “He did. He had a date.”

Jill holds out Colin’s check like she’s going to tear it in half. Colin hollers, “Please! Don’t!”

Lauren tells Victor, “The kidnappers ran! They think we double-crossed them. What if my son pays the price for that?!”