Thursday February 16, 2017: Billy squares off with Colin, Lily opens up to Jordan, and Nick asks Chelsea out again. 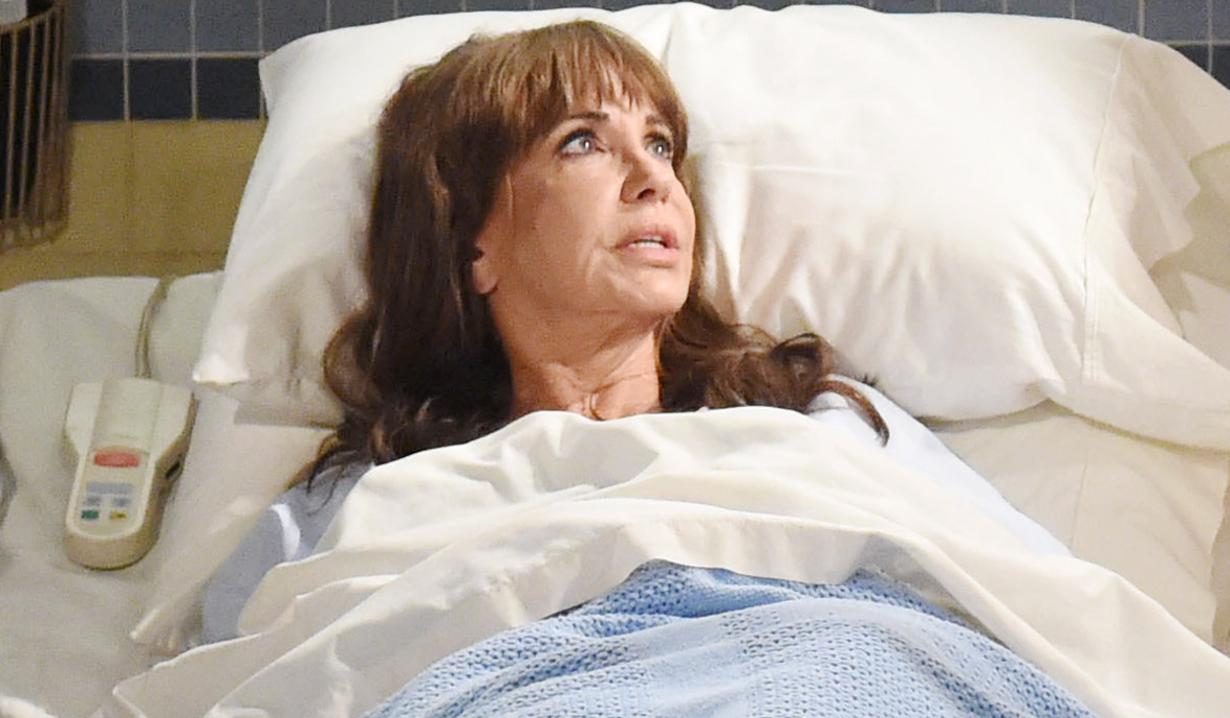 Jill awakens in the hospital to find Billy and Esther watching her anxiously. Jill doesn’t remember coming in…they must have given her drugs last night. Jill’s phone rings – it’s Colin. Esther mutters the louse has been calling all night. Jill learns she’s in intensive care and assumes there was a mix-up since she had heartburn. A cardiac specialist enters and explains Jill had a heart attack and could have died. She has heart disease and blocked arteries – they placed two stents near her heart last night to keep the blood flowing. Jill protests loudly that she’s fine and wants to go home. The doctor manages to convince Jill her diagnosis is real, and advises there will have to be lifestyle changes. Esther exits to get tea. Jill argues with the doctor about having further tests.

At home, Colin leaves Jill a message to call him; he needs to know she’s okay. The doorbell rings – it’s Cane. Colin tells him Jill’s hospitalized and he’s kind of the reason she’s there. Cane groans and wonders how he’ll put Jill’s money back. Colin says, “That’s where you come in, my boy.” Cane is incredulous and reminds him he broke the trust in his marriage. Colin wants to go grovel for mercy.

Lily arrives at Brash & Sassy, where Victoria tells her Cane isn’t in yet. Lily divulges that their dinner last night wasn’t much of a celebration. She explains that Cane is frustrated about how things went down. Vikki has no issue with Lily, and feels Cane is talented, but if he’s going to be on her team, he has to be on her team, it’s the only way this will work. Jordan arrives to work with Lily. They look through proofs and Jordan is disappointed that her usual playfulness wasn’t in evidence. Lily admits she may not be able to keep doing this job. She explains Cane could walk away from the company. Jordan asks if the job makes her happy – why would she give up on her dreams for someone else’s insecurities?

Nick tells Noah he’s ecstatic about his recent ‘numbers’ at The Underground. Noah can’t join the family for dinner, as he needs to be there. Nick appreciates it. He reveals he was with Chelsea last night and they tended bar. Noah recalls Sage helped him out behind the bar too. Nick nods and talks about creating new memories. Noah’s glad about his father and Chelsea. Just then, she appears. Chelsea has donuts and designer’s block. Noah challenges her to a bartending competition. They make three drinks each and Nick declares a tie. Nick invites Chelsea to the Newman dinner, but it’s not what she had in mind. Nick persuades her.

At the ranch, Nikki and Victor discuss the family gathering he has planned. Nikki wonders why they’re having another one so soon. Victor claims there’s no special reason. Victoria arrives and accepts congratulations on buying back Brash & Sassy. She reports on her issues with Cane and Billy. Victor wonders who cares what they think. They debate about the double-standards for men and women in business. Victor defends his record in dealing with Victoria and her brothers. Nikki counsels Vikki not to let business consume her like her father did.

Colin and Cane enter Jill’s ICU room where Billy is lecturing her about her health. Jill takes Colin to task for disrespecting her by using her as a personal ATM machine. Billy takes Colin out, and Cane apologizes for his father being a jackass. Jill loves him, and knew what he was like when she married him, but didn’t think he’d do it to her. In the waiting area, Billy rants at Colin. “My mother had a heart attack because of you!” Colin is taken aback. Billy tells him to get the hell out of there, but he turns back to Jill’s room. Cane closes the window curtains. Later, Jill thanks Billy for getting rid of Colin. Billy urges her to take her diagnosis seriously. “You almost died last night.” Jill concedes – they can do their tests but she doesn’t have to like it. They embrace.

At Crimson Lights, Cane updates Lily on Jill and Colin’s troubles and apologizes for how he acted on their anniversary. Lily apologizes as well, but notes they still have things to work out. She confesses she spoke to Jordan about the tension between him and Victoria and she realized how much she would like to stay on. Cane assures her he wants her to be happy. They kiss.

Victoria tells Abby, “You can rest well knowing I won’t be coming after your job at Newman. Or will I?”

Colin hollers, “Get out of my way, Billy!” Billy responds, “This marriage is over, okay? She is done with you.”