Tuesday January 31, 2017: Jack and Gloria make a pact, Devon gets news from Lily, and Colin confronts Cane about his doubts. 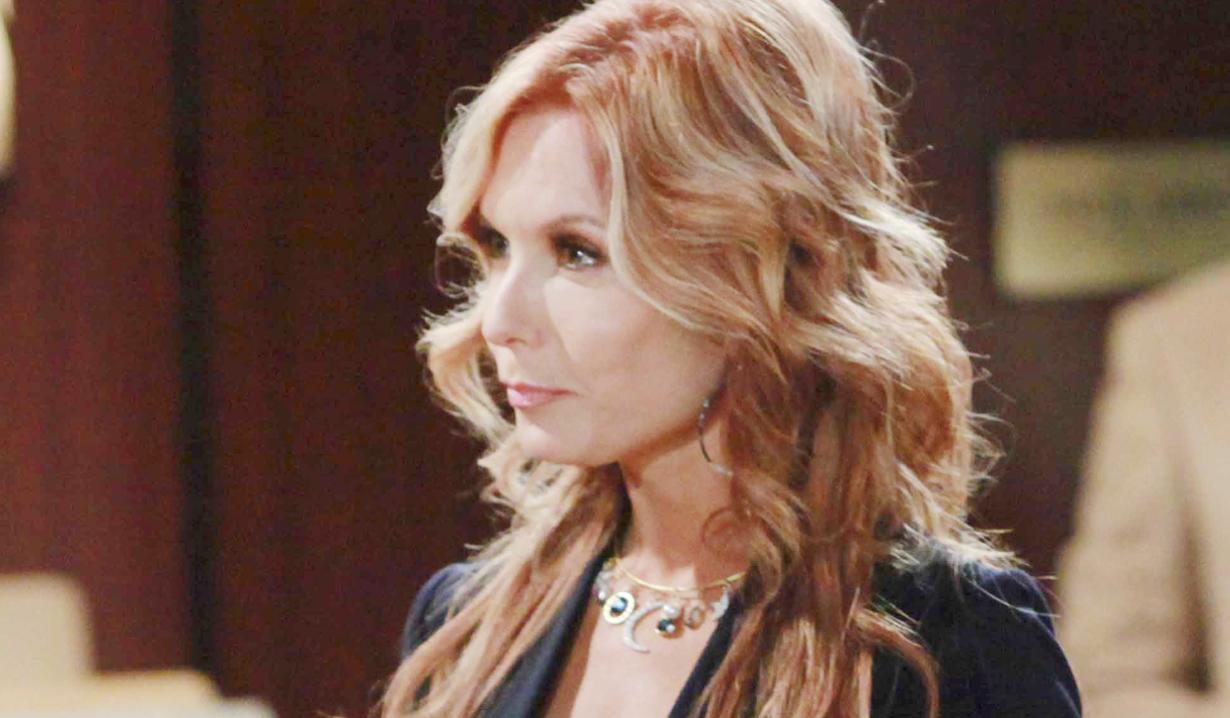 In a Club suite, Jack awakens hungover and realizes he had sex with Gloria. As he dresses, Glo mutters about him zipping too loudly. Jack frets about people seeing them together. Glo recalls them canoodling in the elevator. Jack is beside himself. Glo reminds him they’re two consenting adults, but wants this to stay between them. Mortified, Jack insists nothing happened, but Gloria has bite marks on her shoulder. Jack assures her no one will hear about this from him. In the dining room, Colin arrives and saunters up to Jill. She mentions him having been in Australia. He missed her. Jill updates Colin on Brash & Sassy; she thinks Cane has reservations about Lily’s contract. Colin suddenly gets a message and has to leave. After, Jill spots Jack, who is gingerly making his way downstairs. She drags him aside and he mentions signing the deal to finalize his stake in Fenmore’s. Jill exclaims, “What are you talking about?!” She is livid about being left out of the loop – she would have given Lauren the funds. Jack says the deal is done. Jill says they’ll see about that.

At home, Michael wants to get passionate with Lauren, who pulls away reluctantly; she has to sign this deal with Jack. They are happy about their renewed closeness. He kisses repeatedly before leaving.

In the Brash & Sassy office, Billy and Victoria discuss Lily’s ad campaign for the men’s line. When he mentions single men who want to score, talk turns to Reed and Zoey. Victoria complains that Reed accused her of being stone cold. Billy thinks she over-reacted and embarrassed her son; he urges her to fix it.

Lily and Cane find Devon at GC Buzz and tell him about Lily’s new modeling contract. Devon is proud of her, and accepts her resignation from the Club – Lily deserves this. Devon says he and Cane support her, and turns to his brother-in-law, who agrees. Alone, Lily tells Cane he was convincing to Devon. He insists his only issue is that they offered her a contract without including him. Cane assures her when she’s happy, he’s happy. They kiss. Devon returns and jokes that he’ll have no problem replacing Lily at the Club. Talk turns to Devon’s life. He hopes to get it back on track. Lily hugs him. As they exit, Cane gets a text and grimaces – his father’s back.

Reed arrives at Crimson Lights where Zoey and her friends have made a meme of his mother as a witch. Reed is upset and says his mother has a business and doesn’t need that out there. Zoey feels he’s being weird – she was defending him. Reed informs Zoey she doesn’t know him. Zoey joins him on the patio and apologizes. Reed asks her to hang out again some time – his mom can’t tell him who to like. After, Billy arrives and Reed complains about Victoria’s over-reaction. He doesn’t think she loves him, and shows Billy the meme. He’ll never forgive her.

Lily arrives at Brash & Sassy as Billy and Vikki are arguing about parenting Reed. Billy exits. Victoria goes over Lily’s job and reveals that she’ll have to do personal appearances and interviews on Valentine’s Day. Lily balks, but then assures her it’s fine. Vikki senses a problem and wants to know now. Lily admits she gave Cane a hard time about missing the kids’ events, and now that will be her, but she will do whatever is required.

Jack swills coffee and downs a handful of aspirin as Michael enters the Club and Gloria appears on the staircase. He wonders why she spent the night there, and then spots Jack, who seems under the weather. Jack takes off. Michael grills Gloria for details about her night. He kindly says experience has taught him to expect the worst. Glo lies that she was just giving Chloe space, and adds that her social life is none of his business.

Cane meets Colin at the Chancellor mansion and demands to know what he’s doing there. Colin is there for his family, and brings up Lily’s new campaign. Cane tightly says he supports her, but ‘Dear Old Dad’ doesn’t buy it. Cane sighs that he and Lily are working through the doubts. Colin baits him and Cane starts yelling about the family having to adjust to Lily’s job. Colin notes it’s a challenge being married to a woman who makes more than you do. Cane dons his jacket. Colin points out they married ‘up’ to smart, intelligent women that enrich their lives.

Jill arrives at Lauren’s house and informs her sister the meeting at Jabot can wait. She confronts her about making a decision like this without informing her. Jack leaves a message wondering why Lauren’s late. Lauren informs Jill that she’s saving the company. “I don’t need your approval.” Jill replies, “Oh honey, the hell you don’t.”

Devon tells Hilary, “I freed up some money for on-air talent because you are getting a co-host.”

Billy shows Victoria the meme of her as a witch.

Jack tells Phyllis, “Jill owns half of Fenmore’s, something Lauren failed to consider. Now Jill’s ready to blow up the whole deal!”