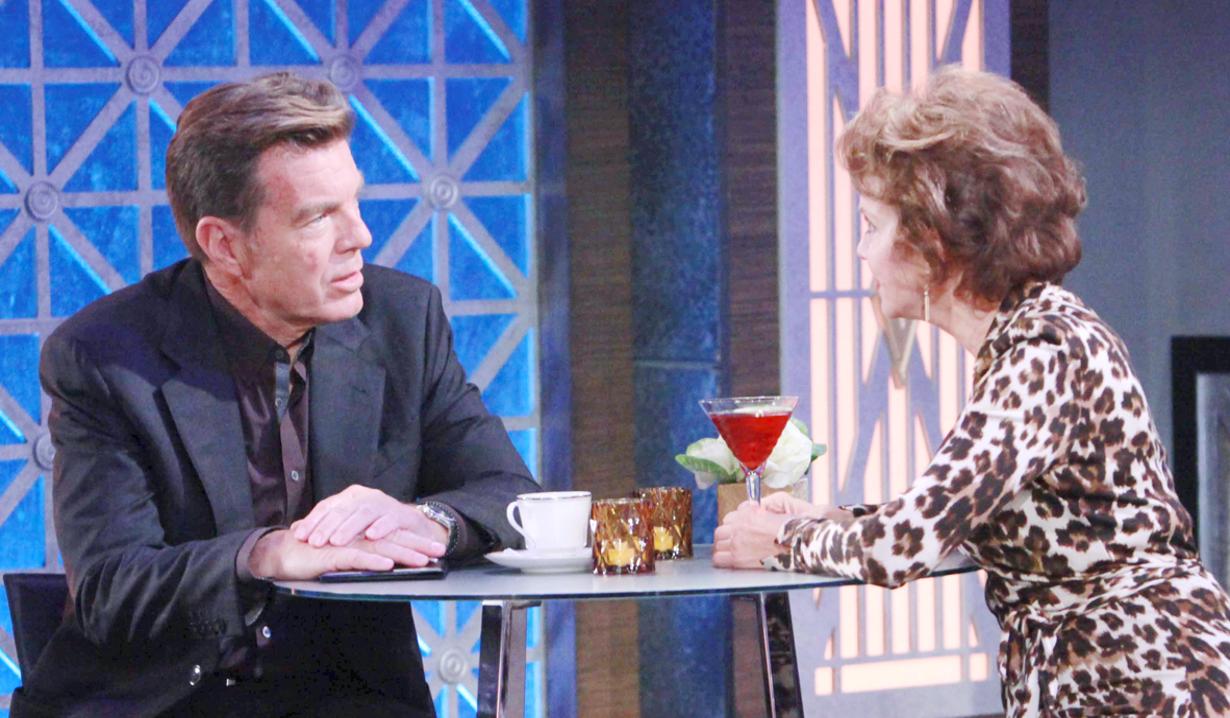 At Jabot, Jack grumbles to Ashley about not yet hearing from legal on Lauren’s contract. Ashley thought he only wanted Fenmore’s if he could have controlling interest. She guesses it’s not about the company, but Phyllis. Jack replies, “In a word…yes.” Jack says it’s not romantic interest, but he claims there is huge potential in having Phyllis work with Ravi. Ash still thinks he wants to play footsies with his ex under the table at board meetings.

In the Club dining room, Phyllis tells Lauren she wishes she’d seen Jack’s face when Eric walked through his office door. They spot Gloria and delight in calling her over for a drink. Over a cocktail, they reveal that Lauren signed a deal with Jabot. Gloria assumes Lauren gave up control. She promises to try and put in a good word with Jack to keep them on. Lauren explains she kept controlling interest in her company and Glo’s jaw drops. After, Gloria calls Jack to meet her at the Top of the Tower.

Ravi joins Ashley and Jack, on his way out, at Jabot. Ashley informs Ravi they’re partnering with Fenmore’s and he may be working with Phyllis. They order Chinese takeout. As they eat, Ravi checks the time repeatedly. Ash questions him. He admits he wanted to go The Underground. Ash turns down an invitation to join him, so he heads out alone.

At The Underground, Nick finds Noah setting up the DJ equipment for a big booking. Noah brings up Sharon being freaked out about Dylan’s secret mission. They talk about how indestructible Dylan is, and Nick vows to try and eliminate the tension between them when he gets back to town. Later, the crowd is jumping and Lauren and Phyllis are tossing back celebratory drinks at the bar. Michael arrives and congratulates his wife, who smacks his behind. Nick gets in the DJ booth to introduce DJ Spectral X (played by DJ Casey Connor). To Michael’s delight, Lauren dances on the bar. Nick and Phyllis decide that used to be them and they miss it. He watches as she joins her friends. After, Noah asks Phyllis to make sure Nick doesn’t get on the bar, before leaving to check on Sharon. Phyllis teases Nick about raising such a mature son, and he asks to see her dance on the bar. Nick then sets her up with an online dating profile, as Lauren and Michael canoodle in a booth. By the DJ booth, Ravi is feeling the music. Ashley appears and dances beside him.

In her living room, Sharon sits wrapped in a blanket. The doorbell rings – it’s Nikki. She’s been grieving all day and wanted to see how Sharon’s doing. Sharon’s heart is ripped out. She hollers that Nikki finally got what she wanted – her out of her son’s life forever. Once calmer, Sharon pours wine and they cry together over the way this played out. Sharon feels it would have been easier if he’d been killed – this will be an eternity of never knowing where he is. Nikki comforts her. Paul arrives to say Dylan got to his new location safely. Sharon isn’t thrilled with Paul, who sent her husband on the mission. Paul says Dylan insisted. Sharon feels she’s the one who gave him reason to go. Nikki reassures her. Talk turns to how they’ll explain Dylan’s disappearance. Paul wants Sharon to say that he left her. Sharon agrees, if it will keep Dylan safe. Nikki and Paul are proud of her. Later, Noah arrives and Sharon tells him Dylan is gone and they’re ending their marriage. Noah consoles her.

At the Top of the Tower, Gloria reminds Jack he promised her a job. Jack points out that 49% doesn’t give him the power to hire – he’s not any happier about than she is. He offers to buy her a drink – she earned it. Once tipsy, Glo giggles over Lauren bringing Eric Forrester to town to put Jack in his place. Jack decides to join her in drinking since his addiction was only to pills. Before long, they’re both totally sloshed and empty shot glasses litter the bar top. Gloria tries to stand up and falls into his arms. They both crack up. Eventually they stagger out holding each other up. Glo slurs, “Does this mean I’m hired?”

Devon says, “So you brought me good news then?” Lily nods. “It depends on how you look at it, we think so though.”

Victoria says, “He’s more than welcome to apologize.” Billy replies, “You embarrassed him in front of a girl, I don’t think he’s going to forgive you anytime soon.”

A disheveled looking Jack tells Jill, “I have to meet with Lauren to sign the contracts to finalize my stake in Fenmore’s.” Jill explodes. “What are you talking about?!”