Friday January 13, 2017: Reed has questions for Billy, Jack and Neil argue, and Victoria lashes out at Jill. 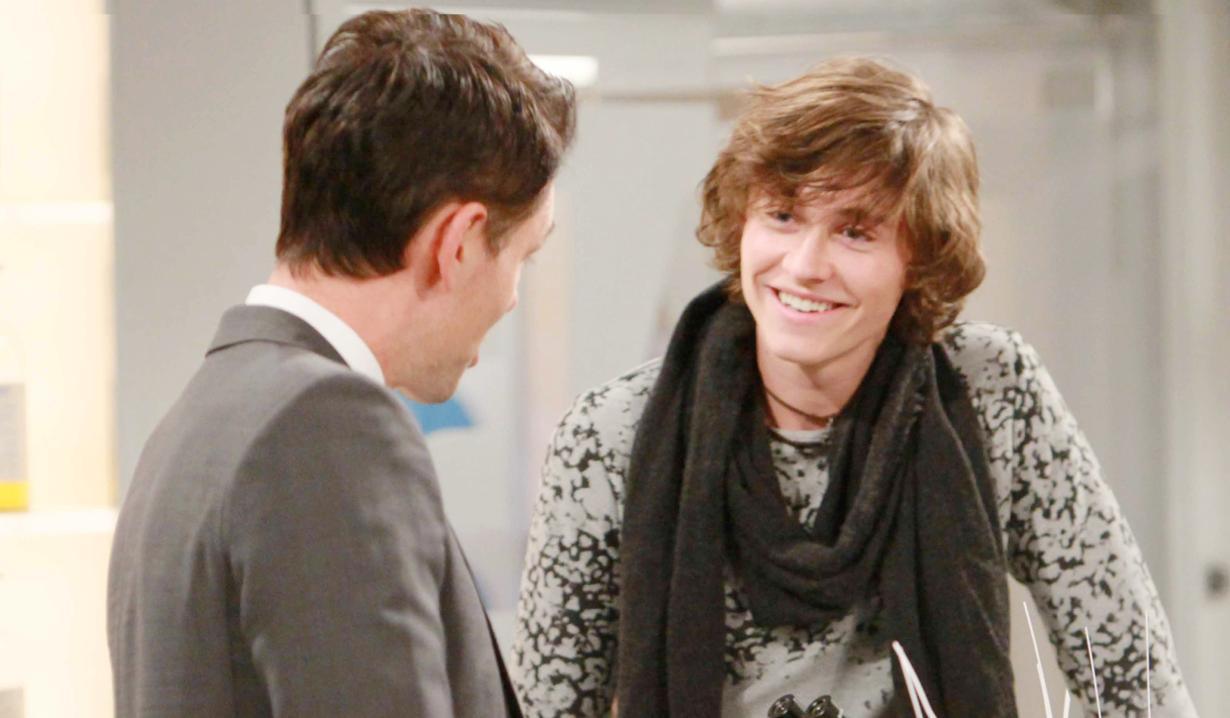 Hilary wakes up in Devon’s hospital room. He had some crazy dreams, but still doesn’t remember anything. Hil notes he’s getting stronger every day and she won’t leave his side. Neil and Lily arrive outside, vowing to keep the truth from Devon so as not to cause him stress. Elsewhere, Abby crosses paths with Stitch on her way to visit Devon. They catch-up politely, and Stitch says it’s good to see her. In Devon’s room, he declares that he wants to ask to be released. Hilary says they’ll get all the help he needs. Devon says she’s the best medicine. Neil and Lily remain silent. Later, Stitch clears Devon to go home despite Lily and Neil questioning it. Neil leaves. Stitch warns again about stress. Hil looks pointedly at Lily and assures him if Devon is upset, it won’t be because of her.

At the Club, Jack is cornered by a reporter who asks whether Devon’s accident was alcohol-related and questions them serving alcohol at the foundation��s benefit. Jack declines to comment.

At the Brash & Sassy office, Jill and Cane talk about Devon’s accident. She snarks that Hilary is a lying, cheating little witch, and Cane sighs that Hilary has a way of manipulating men. Jill feels bad for Devon. In the lab, Reed calls for Billy, but Victoria answers his phone. Once Billy gets on, Reed asks for help with an essay. Billy agrees. After, Victoria acknowledges Reed has a connection to Billy, but warns he will never be filling the role of his father. Billy is just trying to be Reed’s friend. Vikki notes that Billy sometimes acts like a teenager and she needs an adult to keep her filled in on Reed. Billy resents the direction of the conversation and wonders if she has an issue with how he parents Johnny and Katie also. Victoria reassures him – she just needs him to set limits with Reed. Jill and Cane come in. Cane announces Devon is being released. They go over work until Reed arrives. Jill hugs him enthusiastically. Victoria wants to help Reed with his essay, but he wants Billy, who says he’s too busy. Jill offers to cover the work, leaving Billy no choice but to help Reed. Once alone, Victoria snaps at Jill for interfering where her son is concerned and tells her never to do that again! Jill defends her actions, but Victoria feels it’s more of her meddling. Jill accuses her of not being over Billy. Victoria denies it and rants. Jill smiles as she leaves. In the other room, Billy resists becoming Reed’s confidante, but finally relents. Reed pulls out condoms and says he has questions. Billy thinks he should contact his father. Reed says he had the sex talk with JT, but wants Billy to enlighten him on the realities. Later, Reed leaves and Vikki apologizes to Billy. “It was just homework, right? So thank you.”

In Devon’s hospital room, Abby finally gets to visit. She learns Hilary is taking him home and expresses surprise. Devon asks, “Why wouldn’t she?” Hilary covers by saying Abby’s probably concerned she can’t handle Devon’s care on her own, and reassures her. In the waiting area, Lily fills Abby in on Devon’s memory loss and Stitch ordering them not to upset him. Lily hopes he will divorce Hilary when the truth comes out. Abby warns he might forgive her. Later, Cane meets Lily, who says Devon went home with Hilary. She asks Stitch about Devon recovering his memory. Stitch says it may never happen, but warns if it does, and he must relive the trauma, it will be a shock. “Who knows how he’ll react.”

Neil meets Jack at the Club. Jack tells him about the questions he faced from the press. He wants to know if Devon had been drinking. Neil relays that he was under the legal limit, but was driving like a crazy person because he was upset. Jack feels they need to issue a press release, but Neil refuses. He explains the situation with Devon, but Jack warns the press will go after him too. Neil says Devon needs to hear the truth from Hilary. Jack defends her and they bicker. Neil loves Devon and can’t wait for him to get rid of Hilary once and for all.

At home, Hilary helps Devon to the sofa, where he contemplates how close he came to dying and frets over not remembering any of it happening. Hilary doesn’t want to talk about how close she came to losing him. They have a second chance and must celebrate their future, together. She reads get-well wishes and he tells her she’s beautiful. While sleeping, Devon recalls speeding and crashing the car and wakes up.

Jill says to Jack, “That woman has hurt my family so I will not be forgiving her hideous behavior.”

Devon says to Hilary, “I remember being alone in the car. Why weren’t you with me?”