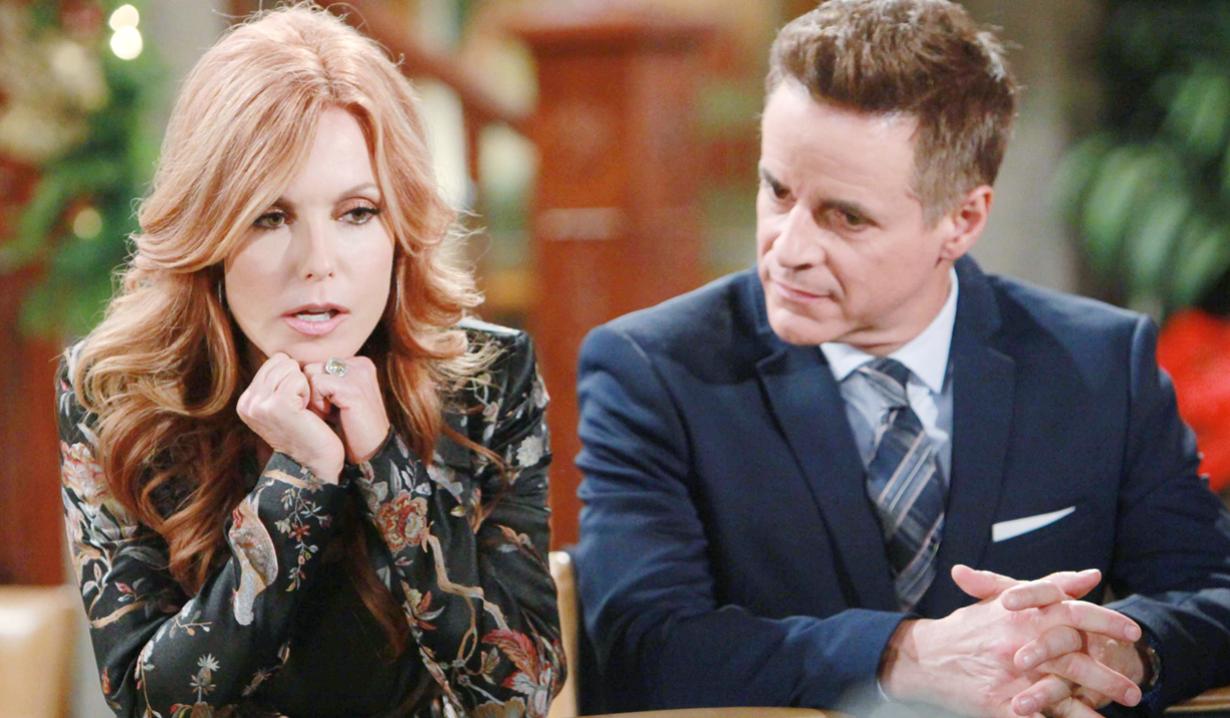 At Jabot, Ashley shows Ravi his new office, which was formerly Phyllis’. He thinks it’s awesome. In Jack’s office, he is on the phone with Gloria, who wants to meet and wonders how badly he wants Fenmore’s. Ashley joins him and Jack updates her that he may have found an ‘in’ at Fenmore’s – it’s Gloria. Ash is suitably appalled. Jack thinks they should hear her out and see if she can deliver. Down at Brash & Sassy, Victoria and Billy discuss Reed. She believes teens need limits and doesn’t require Billy’s back up. They debate about rules and cutting kids a break. Billy compliments her as a mother but feels Reed needs love and support right now. Talk turns to Johnny and Katie loving Reed’s guitar playing and they laugh. Victoria feels old. He offers to help any time, but she’ll handle it on her own.

In the Club, Lauren updates Phyllis on turning down Jack’s offer and Gloria snooping through her computer. Lauren is meeting with a potential investor and needs a marketing report from Phyllis, who realizes she requires files from her old office.

Nikki enters the patio at Crimson Lights and spots Reed; she tells him to give his grandmother a hug. They have a chat about his behavior in running away and getting on a bus to Genoa City. Reed offers to go to Poland, but Nikki clucks that of course she wants him to stay.

Victoria receives a visit from Nikki at Brash & Sassy. She ran into Reed and complains about having to hear the news of his arrival from Victor. Vikki talks about this not being the first stunt Reed has pulled. “You should hear what he put JT through.” Up at Jabot, Phyllis is rooting through files in her former office when Ravi enters. Introductions are made and they compare notes and talk coding. Ashley interrupts and Ravi slips out. Ash demands to know why Phyllis is really there. They sling barbs and discuss Fenmore’s as Ashley sees Phyllis out. After, Ashley rips Phyllis’ nameplate off the door.

At The Underground, Gloria meets Jack and informs him of the state of Fenmore’s. Lauren needs an investor, as Gloria is afraid she will crack under all this pressure. Jack notes that she is sneaking around behind her back. “What’s in it for you, Gloria?” Gloria reminds him she gets things done and would like a small role in the company. Jack wonders why she’s going to such risk for a small role. Gloria insists she’s doing this for Lauren; Jack is the best choice as an investor. She knows when she delivers, Jack will give her a job because he’s John Abbott’s son.

Michael arrives home looking to plan a date night, but Lauren reveals she has problems. “I have not been honest with you.” She says she downplayed the seriousness of the troubles at Fenmore’s, which hasn’t evolved. Michael is distressed to hear that she hid it because she was embarrassed. He learns that she and Phyllis have a plan to turn things around. Michael is glad, but they are also supposed to be a team. Lauren apologizes. They kiss and Michael cheers her on as she leaves for her meeting. Gloria arrives and Michael mentions Lauren’s meeting. Glo reveals that she and Lauren discussed the issues with Fenmore’s. Michael’s upset she didn’t come to him first. Gloria warns him not to add to Lauren’s load; she needs family. “She needs all of us.” Michael looks suspicious.

In the coffee house, Billy gives Phyllis his coffee and tells her he likes her hair. They talk about her moving on. She asks about him and Victoria. He says Brash & Sassy is doing well and they’re killing it on the co-parent front. Phyllis meant on the personal front. Billy has to go, and wishes Phyllis good luck. On the patio, Billy asks Reed if he’s cutting school, but he’s just hanging out before going home. Reed complains that he’s not who Victoria wants him to be. Billy asks him to cut her some slack. Inside, Lauren joins Phyllis and tells her she brought Michael into the loop. Phyllis mentions running into Billy – he is where he’s supposed to be, and she is where she wants to be.

At home, Nikki thinks Victoria should accept help from Billy with Reed. Victoria says it’s not happening. “Billy and I are not happening. Ever again.” Billy and Reed arrive. Vikki announces Nikki’s staying for dinner. Billy suggests they all play a board game later. Nikki agrees.

Jack returns to Jabot where Ashley tells him Phyllis was there. They argue about trusting Gloria. Ash warns he can never forget who he’s dealing with.

Nikki tells Nick on the phone, “Faith really needs you.” Nick says he’s on his way.

Gloria hollers, “I do not like your attitude, Michael.” Michael replies, “And I do not like my mother trying to use me to try to get something Lauren’s already said no to!”